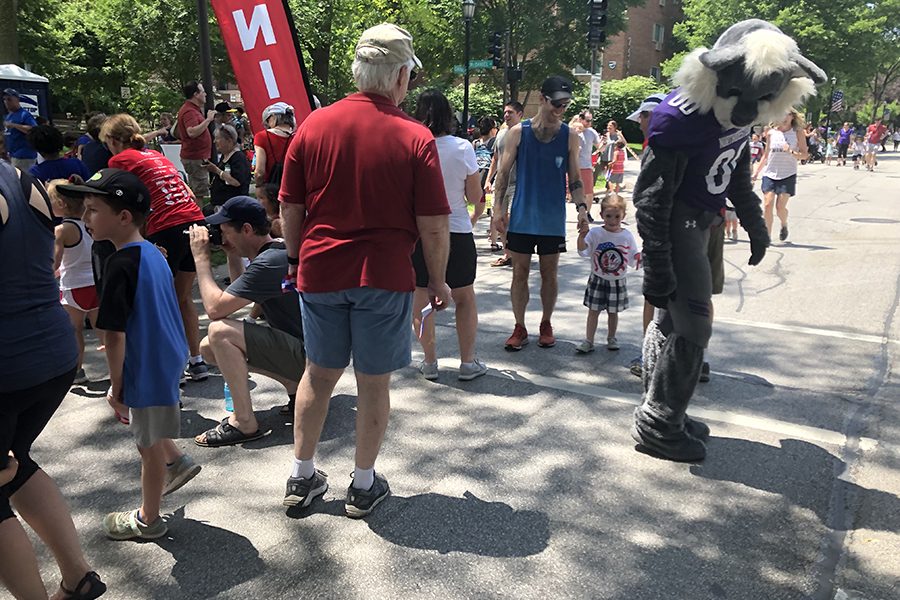 Six-year-old Evanston resident Abel McKenney and his father, Doug McKenny. The two approached Willie the Wildcat at the finish line of the Kids Fun Run.

At the annual Evanston Fourth of July Parade, viewers can always count on one man⁠ — rather, one ’cat — to attend. On Thursday, Northwestern mascot Willie the Wildcat pranced down Central Street to fulfill parade tradition.

This year, 21-year-old Clayton Lawrence was the man behind the fur. Alongside him was his handler, 19-year-old Clark Winkler, a fellow marketing intern at Northwestern University.

For the Willie crew, the Fourth of July begins before the 12:45 p.m. start of the 100-yard Kids Fun Run. Traditionally, the mascot motivates the children and blows the air horn to signal the start of the race.

“We changed into the suit about 25 minutes before the race started and we went out there, and kids just immediately come up to you,” Lawrence said. “You’ve got to have a good, upbeat composure. Just wave to everyone and seem like you’re enjoying yourself.”

When Lawrence is in the suit, he is not allowed to speak, so Winkler handles all of the communication with race officials and monitors his hydration and body heat. Since the suit can get up to 15 degrees hotter than the outside temperature, Lawrence said he is only allowed to be in it for a maximum of one hour at a time before taking a break.

“This is probably the hottest day that we’ve had to do an event,” Lawrence said. “It’s something that you have to prepare for, especially with this heat. You’re told to hydrate because you could lose a lot of weight while you’re in the suit.”

Lawrence said he prepared for the parade by drinking water throughout the morning. There is also a secret code for when Willie is overheating.

“Our favorite line is, ‘Willie’s gotta go use the litter box’ when we’re around a bunch of kids and he needs a break,” Winkler said.

Despite the 92-degree high Thursday, Willie gave high-fives, posed for photos and performed for the children to inspire them to run fast.

After the race, Willie hung out with the children and congratulated them on their finishes.

For the past three years, 10-year-old Evanston resident Jasper Orr has been sprinting in the Kids Fun Run — every year, the large feline has cheered him on.