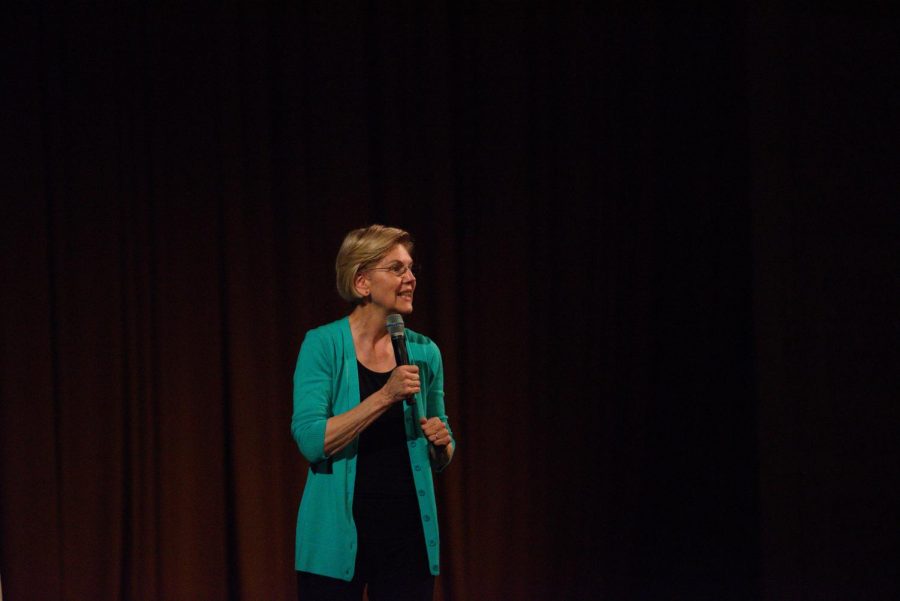 Senator Elizabeth Warren speaks during a town hall Friday night. Warren, one of many running for president, discussed her policy ideas and answered questions at Auditorium Theatre.

So chanted Sen. Elizabeth Warren (D-Mass.) and more than 3,500 supporters Friday night during an event in Chicago — just two days after appearing at the first presidential debate in Miami. The event was held at Roosevelt University’s Auditorium Theatre and marked Warren’s 102nd town hall since the beginning of her campaign.

Brandon Johnson, a Cook County board commissioner, introduced Warren to the crowd. Growing up, Johnson said he held many fears about having no health insurance and sometimes worried about when he would have his next meal.

He said Warren’s story is characterized by similar concerns.

“It’s that fear, of course, that allows us to think beyond the circumstances that are in front of us,” Johnson said during his speech. “That was the Elizabeth Warren story of overcoming fear and (believing) it was possible.”

At the town hall, which was free and open to the public, Warren discussed her policy beliefs for the presidency, outlining three main goals: getting rid of government corruption, restructuring the economy and protecting democracy.

She began her speech by talking about her immediate family, detailing life after her father’s death. Her mother got a minimum wage job at Sears, which Warren said saved her family.

“No matter how scared you are, no matter how hard it looks — when it comes down to it, you reach down deep, you find what you need to find, you pull it up and you take care of the people you love,” Warren said of her mother.

At first, Warren said she thought that was something unique to her family, but years later, she came to understand it was a wider problem. Millions of people across the country do the same thing, she said.

However, she added that it was also a story about government: When a family of three can’t support itself on minimum wage, Warren said, that is “wrong.” She said she wants a government that “works for our families,” especially when it comes to money.

“Whatever issue brought you here today, I guarantee if there is a decision to be made in Washington, it has been touched by money,” Warren said. “It has been influenced by money. It has been moved and shaped and accepted by people with money.”

Warren stressed the importance of having a federal government that works for the people. She said the current system is for large drug companies, for example, rather than those getting their prescriptions filled — it favors the rich.

She outlined a plan to tax those worth more than $50 million two cents on the dollar after that cap. It’s not to be “punitive,” she said, but to reflect the investments the country has made in the wealthy, no matter how they got their money.

“We’re glad to do it, we’re happy to do it,” Warren said. “All we’re saying is that we invested in this together… Two cents is enough to invest all across this country.”

With the funds raised from a wealth tax, the senator said she would support policies like universal healthcare, tuition-free college and a $50 billion fund for historically black colleges and universities.

During the town hall, Warren fielded three questions from audience members, who asked about her stances on policies relating to sustainability, immigration and foreign relationships.

When asked about how she plans to reach first-time, young voters beyond free college, Warren said America’s government is great for those at the top, but not for everyone else. In a democracy, she said, the people can change that.

“The way we make change in this country, is we shine a spotlight on it,” Warren told The Daily in an interview, “and we get enough people engaged. That’s where someone can be part of it.”