Democrats focus on college tuition, abortion in second round of debate 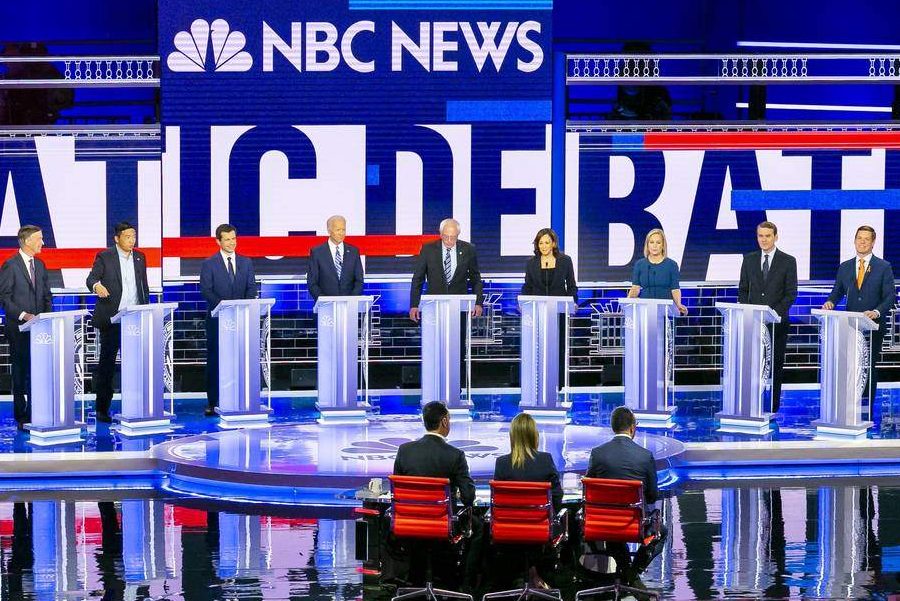 Ten presidential hopefuls stand on the debate stage. Thursday was the second part of the first round of Democratic debates in Miami.

The candidates focused heavily on topics like healthcare and taxes, but they also touched on topics relevant to Northwestern students and Illinois residents.

Tuition-free education came up in the first question of the debate, posed to Sanders — a longtime advocate for it. The senator specifically proposed making public colleges and universities free, a task he said he could accomplish by taxing Wall Street.

Biden agreed, though he chose to focus on schools “in distress” and suggested tripling the amount of money spent on Title I schools — schools with high concentrations of low-income students. The husband of a teacher-turned-community college professor, Biden also promoted the idea of universal pre-K and free community college.

Mayor Pete Buttigieg, however, declared his opposition to free college.

“I just don’t believe it makes sense to ask working-class families to subsidize even the children of billionaires,” he said. I think the children of the wealthiest Americans can pay at least a little bit of tuition.”

The mayor admitted that he and his husband still have a six-figure student loan debt and would prefer lower costs for higher education, too.

But he said the country was missing a piece of the free-college debate.

“It also needs to be more affordable in this country to not go to college,” Buttigieg said. “You should be able to live well, afford rent, be generous to your church and Little League whether you went to college or not.”

Another major topic of debate was guns and how candidates would preserve the Second Amendment but also end mass shootings in the country.

Rep. Eric Swalwell (D-Calif.) named gun control his top priority as a candidate, promising it would remain his top goal if elected president. Like Sen. Cory Booker (D-N.J.), who was on the stage Wednesday night, Swalwell called for a buyback program to remove assault weapons from the streets.

“I will approach this issue…. As a parent of a generation who sends our children to school where we look at what they’re wearing so we can remember it in case we have to identify them later, a generation who has seen thousands of black children killed in our streets and a generation who goes to the theater and we actually know where the fire exits are,” he said. “We don’t have to live this way.”

Sen. Kamala Harris (D-Calif.) also called gun control a top priority. She shamed Congress for its lack of “courage” to take action on the issue, and she vowed that, if elected, she would give lawmakers 100 days to put a bill on her desk.

If they failed to do so, she would take executive action to create background checks, which would include banning the importation of assault weapons and removing licenses of gun dealers who violate the law.

“As a prosecutor, I have seen more autopsy photographs than I care to tell you,” Harris said. “It is enough. It is enough. And there have been plenty of good ideas from members of the U.S. Congress. There’s been no action. As president, I will take action.”

In light of many states fighting to overturn Roe v. Wade, the candidates also spent a significant portion of the evening discussing their plans to defend abortion.

Sen. Kirsten Gillibrand (D-N.Y.), who cited her push for contraception coverage under the Affordable Care Act, said it was “mind-boggling” that in 2019 a woman’s right to choose was still under question.

She then spoke “directly to America’s women” and warned them about negotiations men make about their bodies behind closed doors.

“When we beat President (Donald) Trump, and (Senate Majority Leader) Mitch McConnell (R-Ky.) walks into the Oval Office, god forbid, to do negotiations, who do you want when that door closes to be sitting behind that desk to fight for women’s rights?”

Sanders also chimed in after moderators asked him what he would do to support abortion if the conservative-leaning Supreme Court overthrew Roe v. Wade before he assumed office.

The senator first promised he would never appoint someone to the Supreme Court unless the person was clear that he or she would defend Roe v. Wade. Sanders also added that he is not opposed to rotating judges to have a more even bench, and he stated that his “Medicare for All” plan would guarantee a woman’s right to have an abortion.

“A woman’s right to control her own body is a constitutional right — government and politicians should not infringe on that right,” he said.

The rise of the new generation

The debate, featuring four decades between the oldest and youngest participants, also brought the concept of age to the country’s attention. Buttigieg, 37, and Swalwell, 38, represented the two youngest candidates, while Biden, 76, and Sanders, 77, are the two oldest.

Some Americans already felt wary of Biden’s and Sanders’ ages ahead of the debates, but Swalwell emphasized the generational gap even more.

The representative recalled a speech he heard at age 6 from Biden, who said it was time for the older generation to “pass the torch” to the younger one.

In his closing statement, Buttigieg added that when he reaches President Trump’s current age in 2055, he wants to look back at his life and say his generation helped deliver climate solutions and racial equality.

Even at age 54, Sen. Michael Bennet (D-Colo.) said he was in the race for young people, too, since he’s worried that — for the first time — the younger generation might not do better than the previous one because of restrictions from the Trump administration.

The next debates are set to take place July 30 and 31 in Detroit, and all 20 candidates — by raising money from 65,000 donors and/or hitting 1 percent in three polls — have qualified for them.