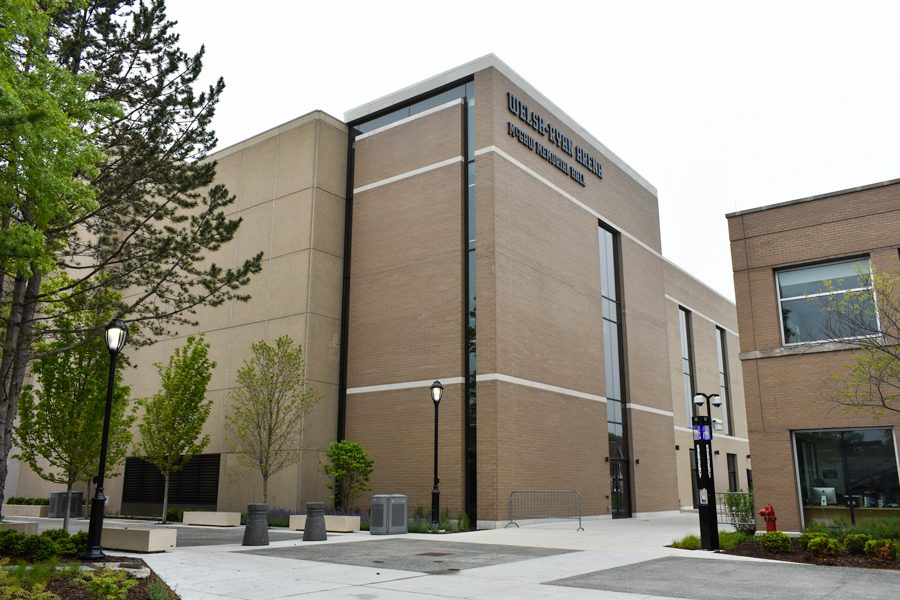 Welsh-Ryan Arena, 2705 Ashland Ave. Northwestern University is looking to get approval from the city to host professional sporting events and concerts at the recently-renovated arena.

Evanston and Wilmette residents voiced concerns at a meeting Tuesday over a proposed amendment to Evanston’s Permitted Uses Ordinance. The policy would allow Northwestern to host professional sporting and commercial events at Welsh-Ryan Arena.

The University was first approached by World TeamTennis in January about using the new arena to host a tournament — a request Northwestern was unable to accept because of the city’s current restrictions on professional athletics.

Of the approximately 90 community members in attendance at Welsh-Ryan Arena’s Wilson Club, roughly 30 publicly addressed the event’s organizers — Mike Polisky, director of external affairs for Northwestern Athletics, and Dave Davis, executive director of neighborhood and community relations for the University.

The residents were nearly unanimously against the proposal, citing concerns such as traffic, parking, noise, and safety.

Simone Oettinger, the owner of the children’s boutique shop Maya Papaya & Tony Macarony on Central Street, was among those concerned. Oettinger lives near Evanston Hospital, just a few blocks east of the Ryan Field campus.

“This neighborhood is residential; it’s not meant to accommodate this amount of traffic,” Oettinger said. “When there are games… there’s no parking in my street. Central Street is the only way for me to get anywhere.”

The University initially wanted to host professional sports and concerts at Ryan Field as well, but backed off earlier this month after an outcry from neighborhood residents. The current proposal would allow the University to hold six one-day events and one multi-day event within a calendar year at the arena.

Polisky and Davis also stressed that this is a two-year pilot program and they have spoken to city staff about a sunset provision. But some residents, including Mary Rothschild, who lives west of the Ryan Field campus on Central Street, expressed doubts about the University sticking to that timeline.

“You say pilot. I don’t hear pilot program,” Rothschild said during the discussion. “Never did they go away in a pilot program. I do not want to see Northwestern or Evanston on that assessment team. I want an independent assessment of whether that pilot program really worked.”

Several Wilmette residents brought their own concerns to the meeting — the Ryan Field campus touches the Wilmette border on Isabella Street and attendees for NU athletic events frequently park on the Wilmette side. However, because the facilities are all in Evanston’s boundary, the University pays an athletics event tax to Evanston but not to Wilmette.

Celene Peurye and other Wilmette inhabitants said they wondered if any value from these proposed events would be returned to Wilmette.

“We have no recourse, being in Wilmette,” Peurye said. “We’re on the border. We’re right there. People do not realize what the impact will be in a neighborhood when you add a big professional sports program or a music program. It’s just enormous.”

Davis said he plans to meet with Wilmette community members and village officials to negotiate a solution.

This is not the first time an issue like this has come up in Evanston. In 1996, a bid to host the Ameritech Cup women’s tennis tournament at Welsh-Ryan Arena was rejected unanimously by city council. Residents were concerned that allowing one event could open the door for permitting more events in the future.

Ald. Eleanor Revelle (7th), whose ward includes Welsh-Ryan Arena, said the amendment will have to be reviewed by the Evanston Plan Commission, whose next meeting is scheduled for July 10, before it can be voted on by the city council.

Revelle said she has been listening to her constituents, who overwhelmingly oppose the amendment.

“I need to support my residents, so I’m a no vote at this point,” Revelle said. “I would like to think what happened in 1996 would be what happens again.”