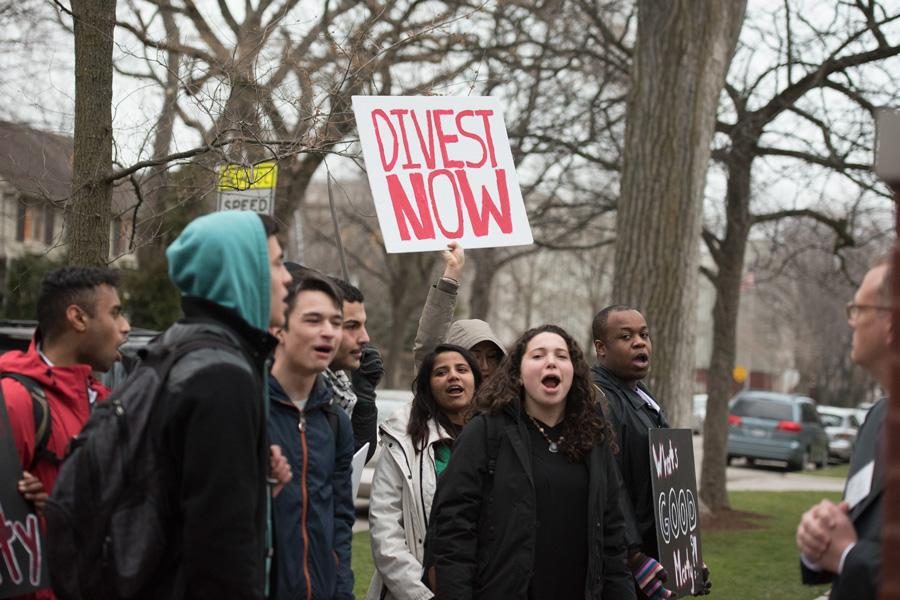 Student activists gather outside University President Morton Schapiro's house in April 2016. Northwestern’s chapter of Students for Justice in Palestine is renewing its for divestment.

Northwestern’s chapter of Students for Justice in Palestine renewed its call for divestment from corporations it says violate human rights after the University went on record late last month opposing a controversial Israel boycott movement.

In a statement on social media, SJP said it was disappointed in Northwestern leadership for a statement that “unequivocally” rejected the Boycott, Divestment and Sanctions movement. The organization said the statement is contradictory to the values of many of its students.

“It is an act of complacency, an act that upholds the status quo in the name of neutrality, all while going against the ethical commitments to ‘diversity, equity and inclusion’ that Northwestern purports to uphold in all of its actions,” the group said on Facebook. “Their statement is an act that completely forgoes the voice of Northwestern’s student body and proves that Northwestern as an institution does not care about the views of its members, equality, or justice.”

Northwestern criticized Medill Prof. Steven Thrasher late last month for comments he made in support of BDS during a commencement speech at New York University. While the University defended Thrasher’s right to express his views, it questioned whether a graduation speech was an appropriate venue to discuss them.

“Northwestern as an institution unequivocally rejects BDS,” the statement added.

In an interview with The Daily shortly after the statement was released, Provost Jonathan Holloway said the statement was a “clarification” of the University’s institutional position on BDS and free speech, not a rebuke of Thrasher.

He said he did not believe the statement made Northwestern a less welcoming place for the professor, who joined the NU faculty this month.

“He lives in a highly pressurized space,” Holloway said, referring to Thrasher’s past career and academic experience. “He believes in fighting for — and I respect it — a certain vision of the world and that’s wonderful. And he knows that if he’s going to lead on these kinds of issues in these kinds of ways, he’s going to get criticized.”

“Four years later, it seems that our President and Provost have forgotten our demands,” the group said. “We would like to remind them where our student body stands.”

SJP also said its members “applaud Dr. Thrasher’s commitment to Palestinian liberation and welcome him to Northwestern with open arms.”