The Daily Northwestern • May 31, 2019 • https://dailynorthwestern.com/2019/05/31/sports/baseball-alex-erro-to-play-in-prestigious-cape-cod-baseball-league/ 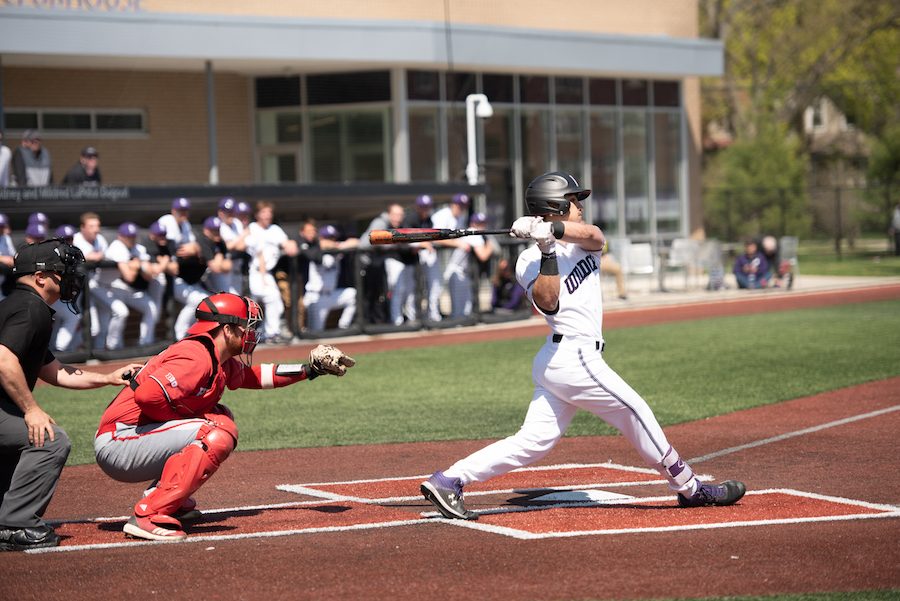 Alex Erro takes a swing. The junior said playing on the Cape was a dream.

For the first time since coach Spencer Allen took over the Northwestern program after the 2015 campaign, the Wildcats will send a player to the premier summer collegiate baseball league.

“I hope he goes out and just realizes that he is just as good as the other guys,” Allen said. “I hope he really looks at how some of the top guys in the country work and prepare on a day-to-day to basis.”

Erro is currently on a temporary contract, which assistant coach Dusty Napoleon said is because of Erro’s draft status. Napoleon said CCBL teams do not like to use a permanent spot on a draft-eligible junior who could be drafted and sign before playing for the team. Napoleon said it is highly likely that Erro’s contract will be picked up for the full summer.

The Cape Cod Baseball League is the best collegiate summer baseball league in the country. Composed of 10 teams across the hook-shaped peninsula in Massachusetts, the league regularly features the top collegiate players in the country.

“It’s good to have somebody from Northwestern on the Cape as a representative,” Napoleon said.

Of the 20 college players chosen in the first round of the 2018 MLB Draft, 16 played on the Cape, including the first three picks. Of Baseball America’s top 10 MLB Draft prospects for this year, seven are college players and only one did not play in the CCBL. Over 300 former Cape Leaguers were on MLB rosters in 2017.

Erro said he does not know anyone on the Harbor Hawks. However, he has talked with his former high school teammate and Florida Atlantic’s Pedro Pages, who played with Hyannis last summer. Erro said Pages told him the experience was “unparalleled.”

During the summer of 2018, Erro played for the Fond du Lac Dock Spiders of the Northwoods League. He hit .348 — second best on the circuit — and helped the Dock Spiders to their first ever Northwoods title.

Erro said playing on the Cape has always been a dream, and he’s excited to pick the brains of other players.

“You hear all the stories — there’s a couple movies made about it,” Erro said. “That’s where the best competition is, and you always want to aim to play with the best.”

Six former NU players from this century have made the majors, and five of them spent at least one summer on the Cape. The only one who did not play in the CCBL was pitcher Bo Schultz, who did not pitch in a collegiate game until his junior season.

Erro said he thinks having one player get a chance to play on the Cape could open the door for more Cats finding themselves playing on the shores of the Atlantic Ocean.

“We have guys that are definitely capable, definitely have the talent but maybe just haven’t had the exposure to play there,” Erro said.

Four players will compete in the Northwoods League. Freshman center fielder David Dunn and freshman catcher Michael Trautwein will suit up for the Lakeshore Chinooks. The two will follow in the steps of Jack Dunn — David’s brother and Trautwein’s cousin — who spent two summers with the team.

Junior infielder Charlie Maxwell will compete for the Spiders in his third season of summer ball. After his freshman year, he played with the Bend Elks of the West Coast League and following his sophomore year, he was with the Brockton Rox of the Futures League.

Sophomore catcher Jack Kelly played with Maxwell on the 2018 Brockton team, and this year the Minnesota native will be with the St. Cloud Rox of the Northwoods. Allen said it is going to be “fun” to follow his progress this summer.

Like the 2018 season, the Brockton Rox will have two NU players featured on its roster this summer. Freshman first baseman Anthony Calarco and sophomore outfielder Casey O’Laughlin will spend their summer in the Boston suburb playing for the Futures League outfit.

Two lightly-used upperclassmen — junior outfielder Kyle Burnett and junior right-hander Nick Cauley — will play for the Michigan Monarchs of the Great Lakes League. Burnett redshirted the 2019 campaign with an injury and Cauley has thrown only 12.1 innings over the past two seasons.

After playing in 19 games this past year, freshman catcher Jack Anderson will look for more playing time as a member of the Syracuse Salt Cats of the New York Collegiate Baseball League.

“He didn’t have many at-bats this spring but he will get 150-200 at-bats this summer,” Napoleon said. “Really excited to follow him and mark his progress.”

Summer ball is important, Allen said, because it gives players a little bit of freedom and “an opportunity to just focus on baseball.” During this time, he said they have a chance to develop and experiment in a more relaxed environment.

Allen said his main focus this summer will be recruiting, but he hopes to watch his players enjoy their summers.

“I’m not sure if it’s going to work out to see Alex,” Allen said. “My guess is I will catch some of the Northwoods games… but I do need to get out to Cape Cod.”