Theatre and The Daily: A (Short) Tale of Two Lives 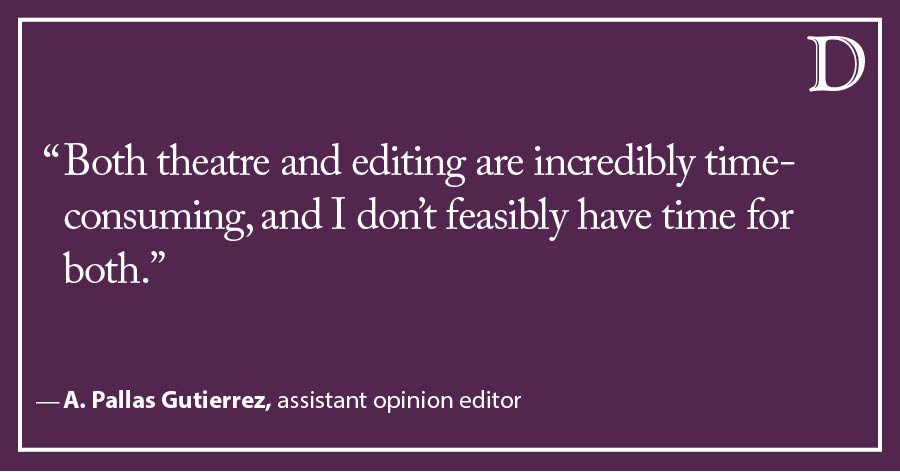 If there were a dual-degree program between Medill and the School of Communication, I would be in it. Initially, I looked at Northwestern because I had heard great things about our undergraduate journalism program. Then, during the summer before my senior year, I realized that my true passion was theatre, and I applied to the School of Communication. But I never stopped looking over my shoulder, wondering if I had made the wrong call.

In my early exploration of NU, when “journalist” was still going to be my future career, I had read about The Daily. I was a reporter and then a columnist in high school, where I wrote about sports, theatre and queer issues. Despite all the rumors I had heard about The Daily only being for Medill students, I marched to the interest meeting and became a Devo writer — the term we use for new writers before they become full staffers.

While the Devo process was kicking off, so was my StuCo season. I interviewed to be the lighting designer for Vertigo’s Winter Reading Series, which led to me sound designing “Children of Eden,” which led to me becoming the master electrician for “Fefu and Her Friends.” All in all, I worked on ten StuCo shows this season, nine in two quarters.

I will openly admit I worked myself too hard. Next year, I will be holding myself to a hard limit of four shows per quarter, preferably two or three. But even so, when those shows are in full swing, production team members have to be at some combination of build weekends, load-in, tech week, production meetings — which often start at 11:45 p.m. — and strike. For many theatre students, myself included, it often feels like there aren’t enough hours in a day.

With my busy schedule, being a reporter felt impossible. That I ended up at Opinion makes perfect sense in retrospect. I have a lot of opinions and not a lot of time. I could write an opinion piece overnight, send it to Alex, Marissa or Andrea for edits before coming in to the office, and be in the office for an hour or less, all the while still making it to my production meetings. Being an opinion writer gave me a non-theatrical outlet that fit into my life.

I applied to be assistant editor for selfish reasons. I wanted to make sure that my “50 Years of Queer Anger” series could keep being published. But being assistant opinion editor has meant so much more. I have grown much closer to all the other editors and learned a lot about how a newspaper gets made. I have had easy nights and insane nights, clocking out at 10 p.m. and 12:30 a.m. There was still a bit of the school barrier that I anticipated; as one of the 16.9 percent of Daily staffers outside Medill, I sometimes had to play catch-up to understand their references. But overall, I have loved spending one night per week in The Daily office this quarter.

Being an opinion editor, in particular, has been very special. I have had complete control over what I write and how I write it. When I first pitched 50 Years, I was nervous that other people wouldn’t find my opinions — or the facts I presented with them — important or relevant. The validation of having the space to publish that series is a joy I am still struggling to put into words. I can never thank the opinion section enough.

Next year, I am going to be the technical director for Vertigo Productions, which means committing to at least build, load-in, tech and strike for each of Vertigo’s slots. I will also be on StuCo exec as co-accessibility, inclusion and diversity chair, a position that my co-chair and I are still shaping. My play, “Carolina at the Cross,” will be featured as a staged reading in Jewish Theatre Ensemble’s Night of New Work. I am fielding offers and sending out emails to work on other shows in scenic, lighting and sound design capacities. Everything is settling in, but I am confident that this year will be a good one for me in StuCo.

By contrast, I don’t know what my next steps at The Daily will be. Both theatre and editing are incredibly time-consuming, and I don’t feasibly have time for both. Maybe I will come back as assistant opinion editor, maybe transition to something else entirely or maybe this will be my final opinion piece.

It’s difficult to pick between two things I love, and I don’t think I’ll ever stop looking back on that day in July 2017 when I felt like I had decided for sure. I know that when push comes to shove, I’ll pick theatre over journalism, and that breaks my heart, but it’s what’s right for me.

Beyond all that, beyond all the aggressive decision-making college culture forces onto us, I am so glad I spent this quarter as assistant opinion editor. I will always value my time here, no matter if this is my final quarter or the third of many.