The Daily Northwestern • May 30, 2019 • https://dailynorthwestern.com/2019/05/30/campus/multicultural-filmmakers-collective-hosts-sorry-to-bother-you-director-boots-riley/ 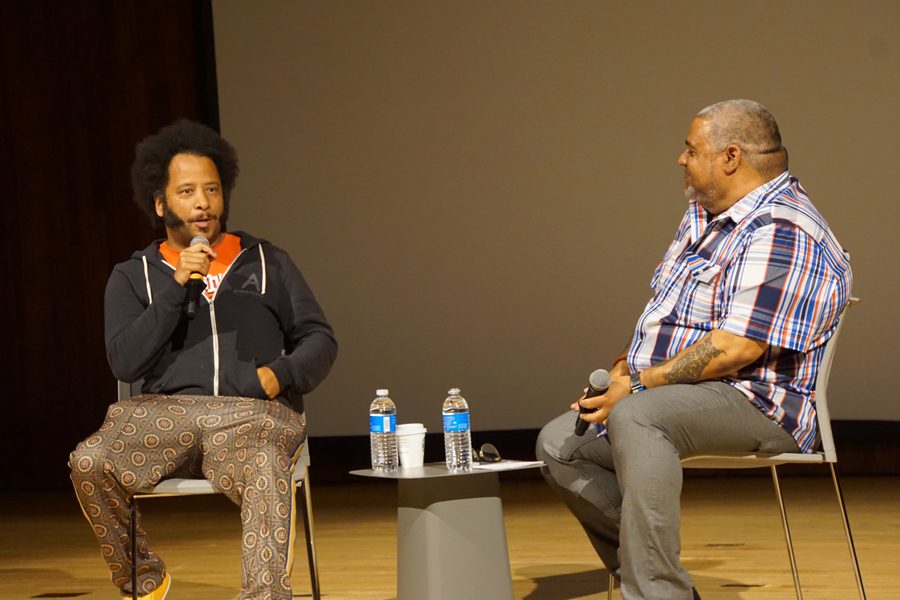 Boots Riley discusses his film “Sorry to Bother You.” The film, a satire of capitalism and racism, is Riley’s debut film.

When Boots Riley was trying to raise money for his debut feature film “Sorry to Bother You,” he would start off by describing an experimental horror musical film about actor Sidney Poitier secretly moonlighting as a serial killer. When the investors and producers were weirded out by this pitch, he would tell them about his actual movie.

“I would be like ‘Well, I’ve got something way more down to earth,’” Riley said to an audience of about 100 in McCormick Auditorium on Wednesday. “An absurdist dark comedy with aspects of magical realism and science fiction, inspired by the world of telemarketing.”

Riley, an artist with a long history in diverse fields like rap, poetry, music and community organizing, spoke as the spring speaker for Multicultural Filmmakers Collective, Studio 22 Productions and the Undergraduate Radio/Television/Film Student Association, as well as the departments of African-American Studies and Radio/Television/Film. The event, which was moderated by Weinberg professor Chris Abani, saw Riley discuss his approach to the art he creates, and his thoughts about how race and the capitalist system intersect.

“Sorry to Bother You,” which released last year to critical acclaim, follows Cash, a young black man played by Lakeith Stanfield who takes a job as a telemarketer and adopts a “white voice” to climb the ranks of the corporation. The film satirizes modern race relations and the dehumanizing nature of capitalism. Communication freshman and Studio 22 Productions and USRA member Maggie Brill said she was a fan of the film, and thought the opinionated Riley would make for an engaging speaker who would be valuable for both RTVF and non-RTVF students to hear.

“Stylistically, the film subverts a lot of conventions in traditional Hollywood filmmaking,” Brill said. “And I think it does that and it pairs that with a lot of interesting commentary on both race and capitalism, class. So I think there’s a lot to unpack in the film.”

During the discussion, Riley said his interest in the story, which centers around injustices against low-income and marginalized people, came from his time working as a community organizer in Oakland, California, where the film is set. Riley said as he was working as an organizer, he became involved in political theater centered around empowering the disenfranchised, and all of the art he has created from then on has been about telling politically charged stories.

Riley said he bases all of his art in the knowledge and passion he gained as a community organizer because people need to be interested in the subjects they create art from for the work they produce to be great.

“The only way you can do art effectively is to have it come from a place of your own passions,” Riley said. “You can’t come at it from the outside. It shows.”

Riley also explained his theories about how capitalism and racism intersect and play off each other, which was explored extensively in “Sorry to Bother You.” Riley said that capitalism is inherently designed to disenfranchise the lower classes and the impoverished in order to sustain itself. According to Riley, racism and xenophobia is used to keep lower-income white people aligned with the upper class by othering marginalized communities and blaming other races for their own poverty.

Riley closed out the discussion by mentioning he was happy to hear stories about how “Sorry to Bother You” inspired people to fight for their rights as workers. He said people have reached out to him about how his film has inspired them to strike against their industries, for example in Salt Lake City, where theater workers unionized because of “Sorry to Bother You.” Riley said that for him, hearing those stories were “better than any award.”

“For me, the idea is to affect millions of people,” Riley said. “Otherwise, I would have stayed in the theater business. But that’s one of the things about film. You can make it so anyone can see it.”

Communication senior Chloe Fourté, who attended the event, said “Sorry to Bother You” “kind of changed (her) life.” Fourté said she was excited to hear from Riley, and found him a great speaker and a refreshing alternative from the often traditional film speakers who come to speak at NU.

“It’s clear that he has a lot of things going through his head at once and makes connections with things others may not necessarily see are connected, so I was really appreciative to hear someone cool,” Fourté said.

Correction: A previous version of this story said Riley was Multicultural Filmmakers Collective’s spring speaker. The event was also hosted by Studio 22 Productions, the Undergraduate Radio/Television/Film Student Association, as well as the department of African-American Studies and Radio/Television/Film. In addition, Maggie Brill was stated as being a member of Multicultural Filmmakers Collective. She is actually a member of Studio 22 Productions and USRA. The Daily regrets the errors.