Currently there is a nationwide conversation occurring in journalism about diversity (and the lack thereof) among newspaper, radio and broadcast staffs. The Daily Northwestern is no exception to these discussions.

Last year, in our first diversity report, we acknowledged our organization had been far from representative of the communities we cover. As part of a now-annual tradition, our staff has taken a hard look at why that is and put more structures in place to combat it. Still, we’ve made missteps along the way. We made errors that eroded the trust many marginalized individuals and communities put in their campus’ and their city’s paper of record.

To address this, The Daily took a look at its own staff first. We sent a survey out at the beginning of May to all members of our newsroom. We had a 100 percent response rate from our 26 editorial board members, while 68 staffers responded in total. (The Daily does not keep a list of every staffer as individual contributors change regularly. However, the number of respondents is considered to be representative of our reporting staff.) The form asked a variety of questions related to identity and staff roles.

Medill students make up a majority of our staff —  83.1 percent of respondents major in journalism. Weinberg students make up 7.7 percent and a combined 9.2 percent come from the School of Education and Social Policy, the School of Communication and The Graduate School. This imbalance narrows the perspective our staffers bring to each story or project, and makes our coverage less reflective of issues not directly affecting Medill students.

Northwestern is a very liberal campus, and that fact is reflected on our staff  — 55.9 percent identified as moderate left, 35.3 as far left and 4.4 as centrist. This breakdown affects what events we chose to cover and what perspective we bring to each story.

The survey found the newsroom is made up predominantly of women. However, The Daily has seen too many women come forth with concerns that they are treated differently than men. This quarter, we have held explicit discussions about how gender affects female reporters and editors, but there is still a long way to go in unpacking the implications. In addition, a combined 6.1 percent of respondents are non-binary or genderfluid, and none are transgender. The data are clear — non-cisgender students are vastly underrepresented on our staff.

The Daily is also overwhelmingly straight. Queer students — particularly asexual students, of whom we have none on staff — are clearly underrepresented at The Daily. For students who hold queer identities, which can often be difficult to realize and come to terms with, navigating a predominantly straight space like our newsroom can pose both professional and social obstacles.

Our newspaper is more diverse when it comes to staffers’ religious beliefs. Still, non-Christian religions are poorly represented on our staff, each constituting less than 8 percent. With anti-Semitic incidents and acts of hate against other minority religious groups on the rise, not having those voices present in our own newsroom when we seek to cover them is unacceptable. 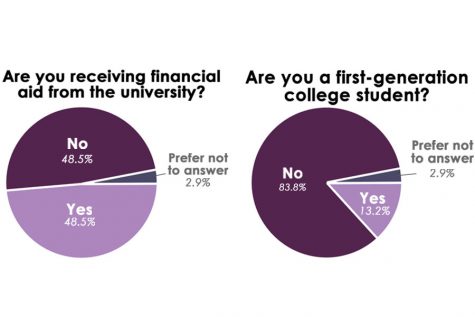 When it came to financial aid, respondents were divided almost down the middle. Further, 11.8 percent of respondents identified as low-income, raising similar concerns of the responsibility to report low-income stories falling on that small group. Especially when leadership positions at The Daily require working long hours that could go toward one’s income instead, this is an area that clearly needs improvement. First-generation college students are similarly underrepresented — 13.2 percent of staffers are the first person in their family to attend a four-year American college or university.

About 10 percent of respondents said they had a disability. From our sparse coverage of disability issues to able-bodied staffers failing to meet the accommodations disabled staffers require to function at The Daily, ableism has negatively impacted every aspect of our paper. In coming quarters, we will work to ensure our own newsroom is an accessible space.

The Daily’s newsroom is 53 percent white. It’s no secret our newsroom is an overwhelmingly white environment, and that is reflected in our decisions to prioritize coverage of certain communities and not others. 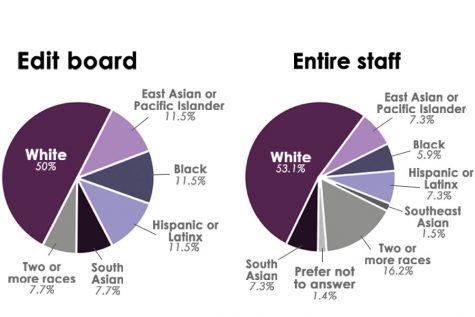 This whiteness can also lead to reporters of color feeling further alienated in the newsroom, and almost undoubtedly leads to less marginalized students joining our staff. Reporters of color also too often carry the responsibility of covering race-related stories, which is also true for queer reporters covering queer issues or first-gen/low-income reporters covering the FGLI community. We need to do a better job of making sure all reporters are equipped and expected to cover all communities when necessary. 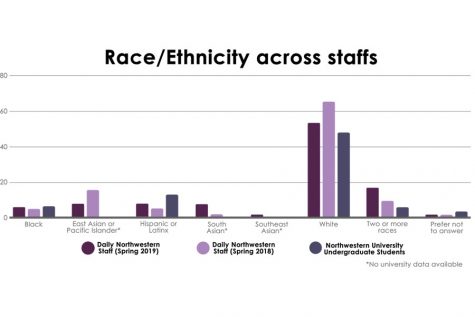 One of the ways we have tried to hold our staff accountable is by calculating coverage statistics. For the past two quarters, desk editors have compiled data about the stories published, how many views they got and breakdowns of our sources’ demographics. While numbers do not tell the whole story about our editorial process or convey the full nuance of our coverage, they do provide a baseline for discussing what communities we are speaking to — and how much further we have to go.

One major community The Daily needs to cover with a lot more nuance and care is first-generation and low-income students on campus. Many of our stories don’t go into detail about the implications of being low-income at this university or skip over important perspectives. Many aspects of being a student at Northwestern are made more difficult because of socioeconomic inequality, and The Daily does not do student concerns justice. In terms of city coverage, we have covered low-income resident issues more deeply this quarter because of the sheer number of movements and conversations concerning socioeconomic status, and we will continue that momentum into the summer and upcoming school year. 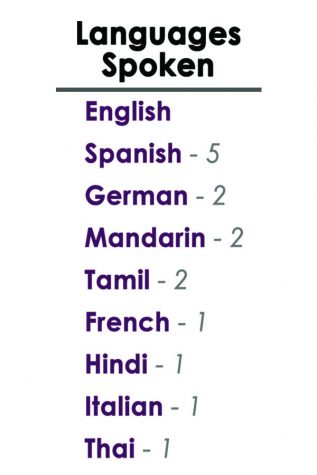 Another major gap in our coverage is the lack of multiple languages represented in our stories. While a few of our staffers are fluent in Spanish or Mandarin, for example, there was only one story written last year with Spanish interviews, and an upcoming investigative article to be translated into Spanish — both written by the same reporter. Multilingualism is an important asset we have on our staff, and we hope to use this skill set to our advantage in the future to benefit the language-diverse community of Evanston.

Additionally, The Daily focuses much of its city coverage on meetings and events close to campus and in city government, which means we under-cover or entirely miss important issues in areas of Evanston — especially concerning wards far away from Northwestern. We are working to build deeper relationships with communities in all wards of the city in order to best cover the vibrant community we live in, starting with our summer coverage onward.

As of last Sunday, our sports desk had written 88 stories on women’s sports and 45 stories on men’s sports. That stark ratio — much different than the nearly 50/50 split between coverage of men’s and women’s sports on the desk during winter quarter — is due largely in part to sports like lacrosse, softball and women’s golf playing deep into their seasons this spring.

At the same time, the dedication to covering non-revenue sports has noticeably increased in terms of staffing and idea generation. Two of our writers profiled women working inside traditionally-male-dominated sports this spring, a series we plan to continue in the fall.

There is still much work to be done — we’re planning to be more conscious of how many words we dedicate to different sports and where these stories are placed in the physical paper. The Daily sports desk needs to continue this momentum and ensure that all sports at Northwestern are covered thoroughly and fairly.

The opinion section is also not as diverse as it should be. While the opinion desk had strong female representation, it severely lacked racial diversity. Our section only featured four columns from black writers. Three individual Latinx writers and four individual Asian writers wrote columns this quarter, as opposed to 13 individual white writers.

The opinion desk relies entirely on submissions for content. Ultimately, certain identities and marginalized groups do not write for opinion because they do not see the section as a comfortable place for their voices to be heard. While we will continue to reach out to a variety of student organizations, we also need to reevaluate why students don’t view our opinion section as a place to submit columns and letters.

The arts and entertainment section also plans to increase the diversity of the sources they speak to — metrics found reporters spoke to a disproportionate amount of white, cis people and left out black, Latinx and genderqueer voices at astonishing numbers. This uneven coverage only adds to the perception of an unwaveringly homogenous arts community on campus and removing the narratives of underrepresented voices on campus trying to gain recognition and respect. Future editors have to give more attention to the organizations who are doing innovative work and fully showcase the vibrant groups on campus.

As explained in this week’s From the Newsroom, current print managing editor Marissa Martinez created the Diversity and Inclusion Editor position during Winter Quarter to streamline diversity responsibilities on staff. Last quarter, Martinez took on all the responsibilities herself. However, this quarter, she expanded the team to include five other senior staffers of various backgrounds and marginalized identities in the newsroom.

The D&I position was created to offset the errors from last year and provoke deeper conversations about the role of diversity and inclusion in the newsroom.

She and the team have compiled weekly newsletters and led discussions about inclusion in the newsroom and coverage. The topics ranged from race and gender dynamics in journalism to inclusive newspaper design practices to queer issues in media. Each newsletter drew from positive and negative national coverage, personal narratives by marginalized journalists and statistics from organizations like the American Society of News Editors.

Discussions about these newsletters included coverage analysis, deconstruction of The Daily’s stories and new article ideas based on the themes discussed that week. As the position grows stronger and adds new team members, the topics and talks will also become more nuanced and encompass more issues.

The success of our organization relies on our accuracy, to ensure our reputational credibility and develop trust with our readers, Northwestern and the Evanston community. This quarter, we took a look at our error policy and rolled out new procedures. Staffers will face stronger consequences for errors — especially identity-based errors — with an understanding that our mistakes cause real harm to people. This could include meeting with the D&I team and editor-in-chief, suspension from writing or removal from staff, depending on the severity and frequency of mistakes.

It takes the input of a diverse workforce to ensure we’re able to responsibly strive toward our goals. That’s why we’re committed to diversifying our staff and providing leadership opportunities to underrepresented journalists at all levels, from reporters to upper management. But while we aim to be transparent, we must also ensure new staffers are provided the institutional support they deserve. We cannot irresponsibly introduce new staffers to our ranks without addressing the institutional obstacles that work against their success.

Moreover, we will evaluate the identities of reporters and the stories they regularly produce — for far too long, it has been the expectation that marginalized journalists are the only ones who can write about their own communities. This is part of the point of having a D&I team: equipping all reporters with the tools and research skills to cover people of any background.

The Daily will never be perfect — we can only strive toward excellence. Many of our efforts have been in response to suggestions and criticisms from our readers. We rely on you, our audience, to provide real-time feedback, and we greatly appreciate it. Without your input, we would be not have crucial perspective about how our coverage is interpreted by readers. We’re still not great, but we’re actively working toward doing better.