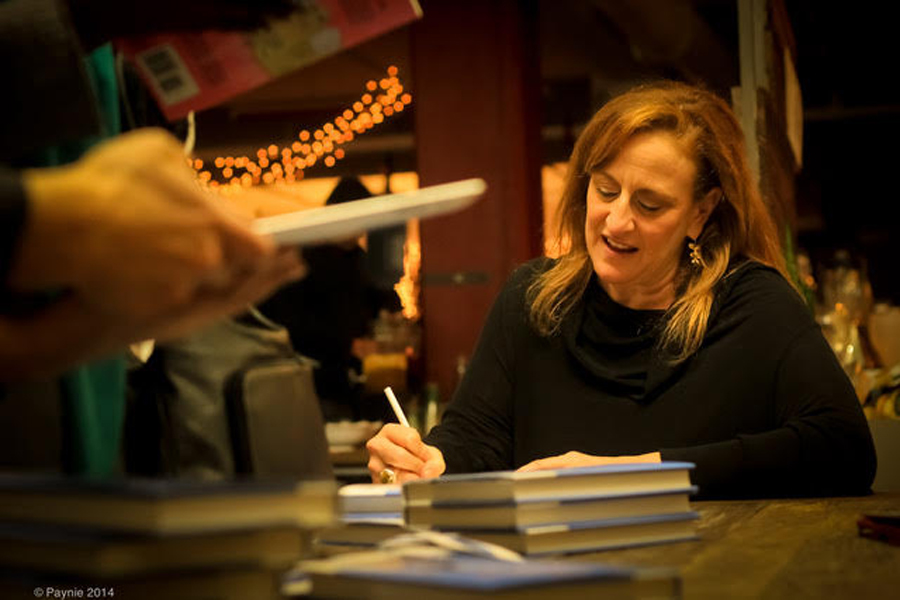 Writer, producer and director Cindy Chupack (Medill ’87) signs copies of her book, “The Longest Date: Life as a Wife.” Chupack’s new film, “Otherhood,” will be released in August on Netflix. (Courtesy of Cindy Chupack)

Writer, producer and director Cindy Chupack (Medill ’87) signs copies of her book, “The Longest Date: Life as a Wife.” Chupack’s new film, “Otherhood,” will be released in August on Netflix.

Cindy Chupack (Medill ’87) always knew she wanted to be a writer. But growing up in Tulsa, Oklahoma, Chupack said she didn’t know of many ways to make a career out of her craft — which was one of the reasons she decided to attend Northwestern and major in journalism.

“Journalism seemed like one of those ways,” she said. “It was partly my limited imagination, and partly my lack of role models of people who worked in Hollywood.”

Now, Chupack has found a way to point her imagination to the big screen. Her first feature film, a comedy entitled “Otherhood,” will be released by Netflix on Aug. 2.

“Otherhood” follows three suburban moms, played by Angela Bassett, Patricia Arquette and Felicity Huffman, as they travel to New York City unannounced to reconnect with their adult sons. For the empty nesters, the journey provides ample time to discover life after motherhood.

This area is not new for Chupack, who has penned works on dating, relationships and motherhood since starting out in Hollywood. Chupack has written and produced shows like “Sex and the City,” “Modern Family” and “Everybody Loves Raymond” — work that has earned her three Golden Globe awards and two Emmys. In addition to publishing a number of personal essays and columns which touch on the subjects, Chupack’s most recent book, “The Longest Date: Life as a Wife,” details her struggles with marriage and infertility.

Most known for “Sex and the City,” Chupack said it was fun to write for the show because she got to detail her experience as a young, single woman. She said she thinks the show is still popular today because the issues of romance are “universal and perennial.”

“You need a friend and you want to commiserate,” she said. “There were so many relatable female issues in the show that aren’t pinned to a certain time. I think they’re just pinned to what you’re going through when you’re in that stage of life.”

But the release of her newest work, “Otherhood,” was not without its challenges. Producer Cathy Schulman said the script was originally “too full of angst,” and needed a rewrite, which is how Chupack became involved.

“That was so long ago that no one ever spoke about how obvious it would be to bring in a woman to punch up the female dialogue,” Schulman said. “But nonetheless, they loved ‘Sex and the City’ and suggested I track down Cindy Chupack.”

However, the rewritten script was without a director for nearly seven years. After some convincing from Schulman, Chupack said it became clear she was going to have to direct the film if she wanted it to become a reality.

Directing was new territory for Chupack, who said she had long been intimidated by directing because she was unfamiliar with the more technical aspects of cinematography. But, she realized, she had to see what she did bring to the table — a lifetime of experiences both on- and off-set.

Chupack said these fears plague a lot of female creatives. Many women will feel like they “need to have a hundred and ten percent of the qualifications that are advertised to apply for the job,” she said, as opposed to many men who assume they will learn on the job.

In addition to many other factors which contribute to the abysmal number of female directors in Hollywood, Chupack said this mentality has to change.

“Women will take ourselves out of the running if we’re not only qualified but overqualified,” she said. “Hopefully women are seeing their glass as half-full more than half-empty and thinking more about what they do bring to the table rather than what they don’t bring.”

The film also pushed back its release date, having been originally scheduled in time for Mother’s Day, because of Huffman’s role in the college admissions scandal, in which it was revealed that she had paid $15,000 to have someone correct her daughter’s wrong answers on the SAT.

For Chupack, the news of the scandal was disappointing, especially given the years she had waited to make the film. While the timing and the subject matter of the film “could not have been worse,” Chupack said the team never thought of reshooting the film without Huffman.

“She definitely took responsibility and she’s been through the wringer publically,” she said. “I hope by the time this premieres in August, people will still just be able to see it for what it is, which is really a valentine to mothers.”

Schulman said she hopes people will see the film because of its subject matter — it focuses on the “fragile stage of womanhood” that comes after parenting but before the “grandmother” stage begins.

Women have full lives, Schulman said, and this gap period is one to be explored.

“Who are we supposed to be in this phase?” Schulman said. “The women we were before we had kids, the women we became with kids or something entirely different? The film digs deep into all of this unchartered territory.”

Chupack said she hopes to encourage other female writers to feel comfortable sharing their experiences — something she has done working with the Council of One Hundred network, a program dedicated to connecting female undergraduate seniors and recent graduates with successful Northwestern women. In these events, Chupack said she talks to women not only about how to be confident in business meetings and writers’ rooms, but how to write personal narratives.

Most recently, Chupack talked about those same skills while video chatting into a Medill graduate class focusing on personal essays. Prof. Mei-Ling Hopgood, who teaches the course, said the particular class was centered around writing emotions, and Chupack talked about her experience incorporating her own emotions and experiences into her writing.

Writing humor, Hopgood said, is difficult, but Chupack gave the class one piece of advice that stuck in her head: write the story how you would tell it to a close friend. This, she said, allows you to be vulnerable and connect with the audience.

Hopgood said she hopes the students were inspired by Chupack’s talk.

“There’s a lot of journalism students who would love to be screenwriters, and I think that she just had a lot of great advice about writing and thinking and feeling and sharing your story and how important that is,” Hopgood said.

Through her unconventional road to directing, Chupack said she wants to inspire young, creative women to realize their full potential.

And hopefully, Chupack said, she can be a role model for girls like her who couldn’t imagine a career in creative writing.

“For a long time, the networks were kind of going after the same audiences,” she said. “Now there are more voices, which is really what we need because that’s what keeps the industry alive and vital and that’s… what will hopefully bring us all together.”