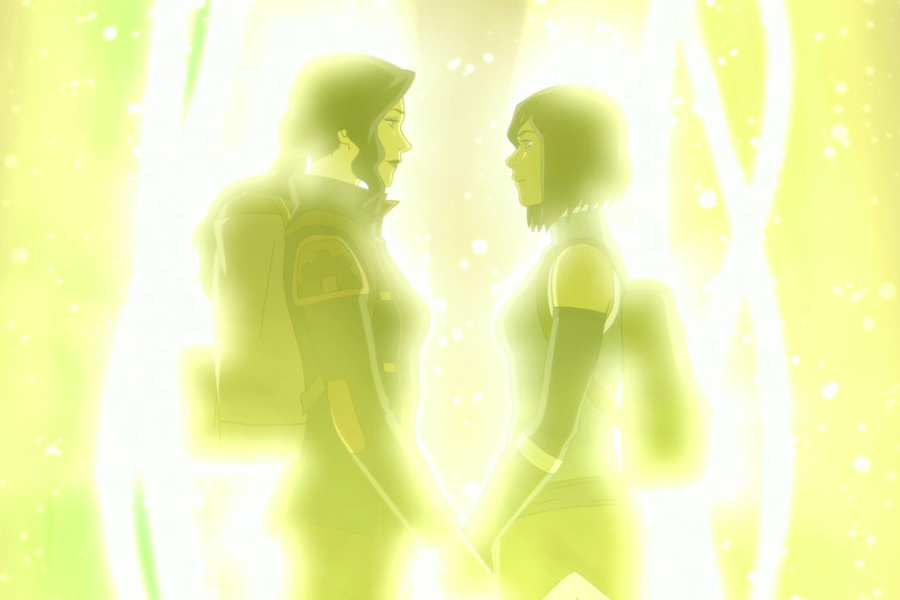 Korra and Asami in “The Legend of Korra.” Since ending in 2014, the show has proven to be a game-changer for queer representation in children’s media. (Courtesy: Sydney McCormick)

Korra and Asami in “The Legend of Korra.” Since ending in 2014, the show has proven to be a game-changer for queer representation in children’s media.

Five years after ‘The Legend of Korra,’ queer representation in children’s TV continues to evolve

It’s somewhat embarrassing to admit, but the only time I’ve ever cried watching a TV show was during the series finale of “The Legend of Korra.”

I was 15 when the show ended, and secretly started watching three years earlier out of loyalty to its parent show “Avatar: The Last Airbender.” I bought the tie-in merch, went as Aang for Halloween and tried running away from home when my Dad wouldn’t let me watch a new episode. I had, and still have to this day, a strong emotional attachment to the imaginative, colorful universe of the series. Diving back in through “Korra” comforted me during my rocky high school experience.

Still, the first two seasons of “Korra” often left me frustrated. There were highlights for sure: the spectacular animation that made “The Last Airbender” a hit was better than ever, and I loved Korra as a protagonist. But the show had many issues, none worse than Korra’s love interest and insufferable prick Mako, who cheated on his girlfriend Asami with Korra. The resulting drama was insipid and tedious, often coming across as something out of “One Tree Hill” rather than the epic fantasy of the original series.

It was only during the third and fourth seasons, when Mako and Korra broke up, that “Korra” reached its full potential. And one of the highlights was the depiction of Korra and Asami’s friendship. The two had more chemistry than either did with Mako, and there were certain scenes between the women I thought might be hinting at something more, but dismissed as me reading into things. “Korra” tackled mature issues like warfare and PTSD, but it was ultimately aimed at children, and it wasn’t going to include a lesbian couple, much less star one.

So when the show’s final episode confirmed Korra and Asami’s relationship, I became overwhelmed with emotion seeing them hold each other’s hands and stare into each other’s eyes. Emotion at seeing myself represented in this world I cared so much about, and emotion at thinking of how a children’s show was including an explicitly queer relationship.

“The Legend of Korra” isn’t the reason I came out. But the finale made me feel less alone when I felt isolated from everyone around me. If it wasn’t for “Korra” and queer representation in other shows I was watching at the time I may not have grown comfortable enough with my sexuality to come out in 12th grade. And looking back, if more children’s television had included queer characters, I may never have had to come out at all.

Before “Korra’s” watershed moment, queer representation in kids TV existed, but only subtextually. I recently learned one of my favorite childhood cartoon characters, goofball Richie from “Static Shock,” was gay in the original comic book. Although showrunner Dwayne McDuffie wanted to maintain that in the series, he was only allowed to hint at it.

This was the situation many animated TV creators were forced into with any characters they intended to be queer, as networks prevented them from portraying gay relationships. Greg Weisman was not allowed to portray the character Lexington in his ‘90s animated series “Gargoyles” as gay, X-Men villains Mystique and Destiny’s explicitly romantic relationship in the comic books was reduced to subtext in “X-Men: Evolution” and in the English dub of the “Sailor Moon” anime, lesbian couple Sailor Uranus and Sailor Neptune were turned into cousins and any references to their romantic relationship were removed.

“Korra” ended in 2014. Almost five years later, it’s clear the show broke barriers for queer representation in children’s TV. Since the finale, multiple shows have included explicitly queer romantic plotlines and characters. The most recent example — the gay wedding of Mr. Ratburn featured in the PBS show “Arthur,” — attracted praise on social media. At the same time, many conservative commentators disapproved of queer representation on a children’s show, and Alabama Public Television refused to air the episode.

Arguably the most notable animated show for queer representation since “Korra” is “Steven Universe.” The show premiered in 2013, and has since become one of the most queer-friendly shows on television. The show featured the first gay wedding in the history of children’s cartoons, between Ruby and Sapphire, and a plotline following a main character struggling to move on from the death of the woman she loved.

Even in shows that don’t star queer characters, creators have been making an effort to include more queer representation through minor characters. In particular, it has increasingly become a trend to depict same-sex parents in cartoons, reflecting the reality that many kids watching know a peer being raised in a same-sex household. One of the first shows to set this trend was “Clarence” with an episode that aired in 2014. Since then, animated kids shows like “The Loud House,” “Summer Camp Island,” “The Dragon Prince” and “Doc McStuffins” have followed suit.

This representation gives me hope current young queer children will grow up in a more accepting, inclusive world. However, these shows have not been flawless.

When “Korra” ended, having two women enter a romantic relationship was radical and progressive. Although the show did not explicitly portray Korra and Asami as queer until the last possible moment, their status as the first queer main characters in Nickelodeon’s history made its secrecy more understandable. In the years since, however, shows have continued to conceal queer relationships until the last minute, like in “Gravity Falls” and “Adventure Time.” Because networks still prevent creators from fully depicting queer relationships, these shows don’t fully explore queerness, instead including it as a final twist.

These shows also have many of the same issues with queer representation as adult-oriented television, like killing off queer characters. One appalling example is “Voltron: Legendary Defender,” a Netflix reboot of the classic ‘80s anime. In 2018, the show revealed the protagonist Shiro was formerly in a romantic relationship with a man named Adam, only to have Adam unceremoniously killed off in the season’s premiere to provide cheap angst for Shiro. This plays into television’s tendency to not only kill off queer characters, but also give them undignified and meaningless deaths. In the eighth and final season, the showrunners responded to the resulting backlash by ending the show with a time jump showing that Shiro married a man later in life. For many fans however, this ending felt like a desperate apology instead of a suitable and satisfying ending for Shiro.

Furthermore, like adult-oriented television, the representation these shows offer still often doesn’t include everyone. Even as Cartoon Network and Netflix make efforts to include gay and bisexual protagonists, transgender characters remain an unexplored area of children’s media. Trans people are some of the most vulnerable members of the queer community, and having representation of this population accessible to children could be invaluable for further acceptance and understanding of trans issues. And while shows like “Korra” and “Voltron” depict queer people of color, most fail to explore the experiences of QTPOC.

The only possible trans representation in a mainstream animated kids show so far is in the Netflix original “She-Ra and the Princesses of Power.” The show attracted a lot of attention from the queer community when it premiered in 2018 for the relationship between main character Adora and antagonist Catra, as well as several queer side characters. Fans of the show have speculated that one of Adora’s friends, Bow, may be a trans man. This stems from a season one episode where Bow, while at a spa, wears a garment that appears to be a type of chest binder. In spite of fan enthusiasm for this idea, however, Bow’s status as the first trans character in a mainstream children’s animated show remains frusturatingly ambigious.

And outside the world of animation, live-action children’s media has been slower to depict queer characters. “Good Luck Charlie” caused a stir, and a protest from anti-gay movement One Million Moms, when it had a lesbian couple appear on the show in 2014. In 2017, the second season of Disney Channel show “Andi Mack” began a storyline where middle-schooler Cyrus started slowly coming out to his friends, eventually becoming the first Disney character to say the word “gay” in a 2019 episode. However, the show was unceremoniously cancelled this year in the middle of its third season, and with it one of the sole current live-action representations of queer youth targeted towards children.

On some level, I feel guilty for pointing out the issues with the representation that this new wave of animated shows has worked to provide. When I watched Cartoon Network and Nickelodeon, I never imagined they would include romantic narratives I could find myself in.

But really, that’s the point. It’s important that these shows for kids make everyone, gay or bi or trans, feel accepted, and included, and normalized. And that’s why creators and channels need to continue to push the limits of the queer narratives we tell our children — so maybe someday, that final scene of “Korra” won’t be the titanic, earthquake-level event it felt like for me at the time. Instead, It’ll just be reality.

Related Stories:
– Inside Bachelor Nation’s diversity problem
– Reflecting on “One Day at a Time”, a month after its cancellation