The Daily Northwestern • May 28, 2019 • https://dailynorthwestern.com/2019/05/28/sports/lacrosse-northwestern-ends-season-with-blowout-final-four-loss-to-maryland/ 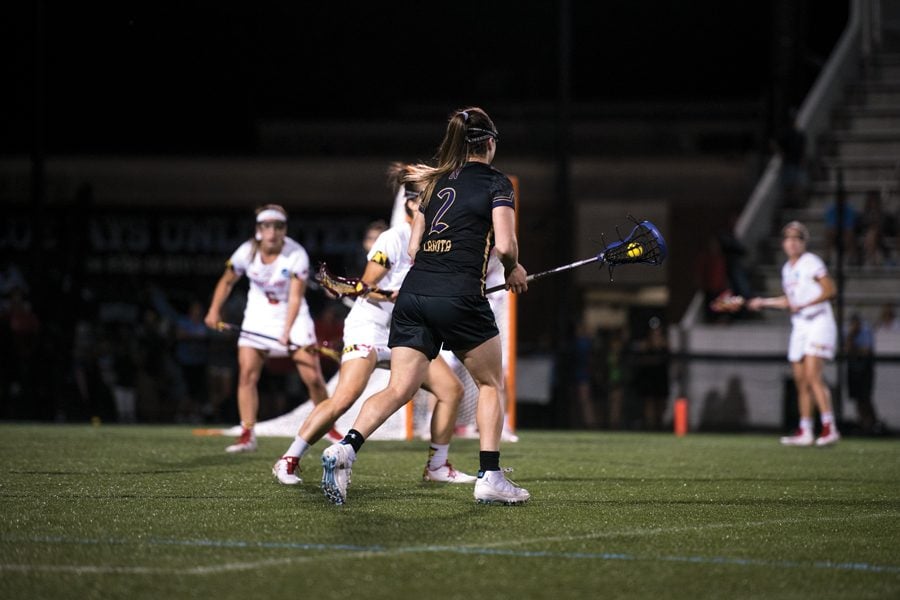 BALTIMORE — At around 8:40 p.m. Eastern Time on Friday, No. 4 Northwestern’s and No. 1 Maryland’s players jogged out onto Johns Hopkins’ Homewood Field and took their positions, primed for their highly-anticipated third matchup of the season in front of a sold-out, Final Four crowd.

A few minutes later, they jogged straight back to their sidelines because a shot clock wasn’t functioning properly, and it would be another 30 minutes before they would take the field again. An already-late start — the semifinal before between North Carolina and Boston College ran into two overtimes — was pushed even later.

This was déjà vu for both teams. In their first meeting this season in April, an hour-long delay due to weather gave the Terrapins new life and allowed them to pull away from the Wildcats. Friday was no different.

NU (16-5) kept the deficit within an arm’s reach for the first 40 minutes of the game, but the Terrapins (22-1) scored nine straight second-half goals and topped the Cats 25-13, ending NU’s attempt to reach its first championship game since 2012.

“It really stings to lose at this point, because we had high hopes for us down the stretch, but Maryland was the better team tonight,” coach Kelly Amonte Hiller said. “It’s unfortunate, but it doesn’t define us. I’m really, really proud.”

The Cats didn’t look like the same team that had defeated the Terrapins on the same field less than three weeks ago to win the Big Ten Tournament.

The 25 goals Maryland scored were the most an NU team has allowed in the program’s 34-year history.

“(The Terrapins) were really firing on all cylinders, and they obviously were very motivated,” Amonte Hiller said. “They’re a tough team to beat when everyone shows up.”

In their two previous tournament games, the Cats got out to early leads, going on runs of eight and six unanswered goals, respectively, against Notre Dame in the second round and Syracuse in the quarterfinals.

But on Friday, NU never had the lead, as Maryland jumped out to a 3-0 advantage in the first five minutes of the game. Led by rookie attacker Izzy Scane, the Cats battled back and went on a 4-1 scoring run, The Big Ten Freshman of the Year collected a hat trick in the game’s opening 10 minutes.

The Cats had their chances in the first half — they took 16 shots to Maryland’s 18 and out-drew the Terrapins 11-8 in the circle — but sloppiness on short passes and ground balls inside the 8-meter arc led to 10 turnovers in that span.

“We didn’t really do a great job with the fundamentals, and it was a little bit uncharacteristic of us,” Amonte Hiller said. “You really need everyone to step up — your role players, everyone — in order to win a game like this. And we just didn’t do that today, and they really did that.”

Maryland only held a four-goal advantage at the half, and while NU came out firing with four quick goals in the second, it didn’t have enough to stop the Terrapins’ multi-pronged offense. Eight different Maryland players scored at least two goals on the night, and attacker Brindi Griffin exploded to record five of her six goals in the second half.

As the Cats struggled after the break, Maryland goalkeeper Megan Taylor anchored her own team’s defense, making eight of her 14 saves in the second half. Taylor also forced NU into going 1-for-7 on its free-position attempts and held the Cats scoreless for the game’s last 19 minutes.

The Terrapins went on to beat Boston College 12-10 in the championship game two days later, riding Griffin’s three-goal performance and another strong, 10-save showing from Taylor — one that boosted her case to become the first-ever goalie in men’s or women’s lacrosse to win the Tewaaraton Award — to their 14th national title.

With three turnovers and only three goals on seven shots, it wasn’t the exit she’d hoped for, but senior attacker Selena Lasota cemented her place as one of the best players in team history. She finished with 85 goals this season and a program-best 287 career goals.

After leading the Cats to their first-ever conference title and their first Final Four in five years, Lasota’s legacy on the program will last long after this weekend, but she was quick to deflect the credit away from herself.

“I didn’t get this program back,” Lasota said through tears after the loss. “This team did.”