The Daily Northwestern • May 27, 2019 • https://dailynorthwestern.com/2019/05/27/sports/softball-northwesterns-season-ends-with-losses-to-oklahoma-in-super-regional/ 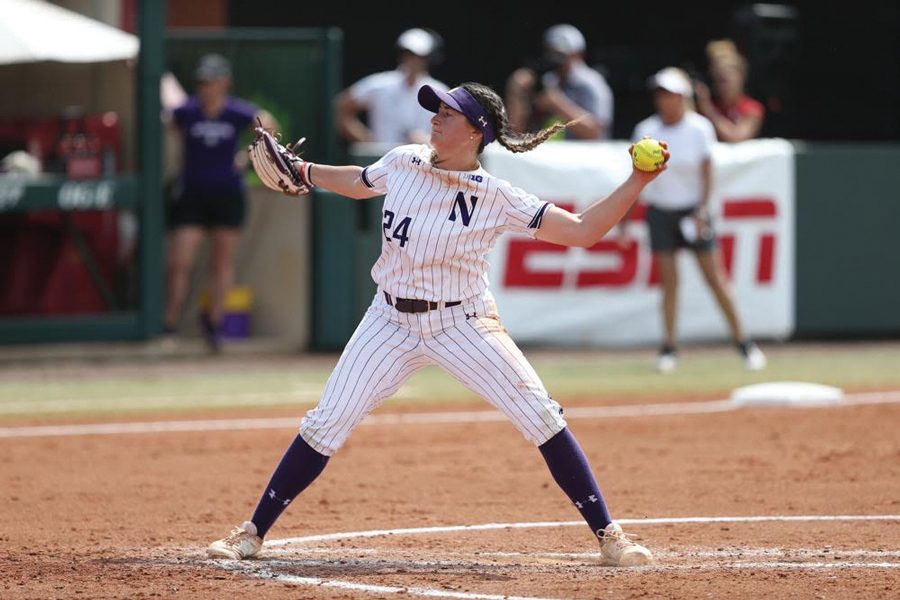 Danielle Williams delivers a pitch. The freshman pitcher started in both of NU’s Super Regional losses in Oklahoma.

All good things must come to an end.

After achieving a 20-game win streak, claiming the 600th win for coaches Kate and Caryl Drohan, and embarking on its deepest run in the NCAA Tournament since 2008, Northwestern’s 2019 season reached that end this weekend with two losses to No. 1 Oklahoma in the Norman Super Regional.

“Oklahoma’s the number one seed in this tournament because they’re so deep,” coach Kate Drohan said. “Offensively — I mean, even their pinch hitters are tough. There’s no drop off there. From the pitcher’s (circle), all three pitchers are tough.”

Sooners pitcher Giselle Juarez dominated Friday’s game as she struck out 11 Cats and allowed only two hits — a first-inning single to freshman Nikki Cuchran and a sixth-inning double to sophomore Rachel Lewis.

Though the hits may have sparked some energy in NU’s dugout, the Cats couldn’t eke out any more to drive in their teammates.

“I think our hitters got a little big — tried to do too much,” Drohan said.

Freshman Danielle Williams gave up a double in the first inning of the Super Regional’s opener to Falepolima Aviu, which scored Sydney Romero. Romero scored again in the fifth, and Caleigh Clifton followed after an error from Cats third baseman Mac Dunlap.

Saturday’s game started out similarly, with Oklahoma scoring a run early off Williams. The game broke open in the third when Romero blasted a solo shot and Jocelyn Alo cracked a two-run homer. Grace Green then trotted home after an RBI single from Nicole Mendes.

NU replaced Williams with sophomore Kenna Wilkey, and she gave up the remaining three runs — all on solo homers — in her 4.2 innings of work.

“For our pitchers, it’s just worrying about being sharp, and today we weren’t completely sharp,” freshman catcher Jordyn Rudd said. “I think it’s something our pitchers need to keep being better at.”

“You face a team like Oklahoma, you want to keep the ball in the park,” she said. “I don’t think we saw our best stuff out there today, (but) we’ll learn from it — we’ll get better from it.”

Despite the outcome this weekend, Drohan said she was proud of her team for their growth this season, and she is optimistic about next season.

Not only does she think the incoming freshman class will “inject even more energy” into the team, but she thinks the returners will be pumped as well.

“They’re hungry for it,” Drohan said. “And I’m excited about our work ahead.”