The Daily Northwestern • May 27, 2019 • https://dailynorthwestern.com/2019/05/27/sports/rosenberg-quiet-ending-not-reflective-of-northwestern-softballs-resurgent-season/ 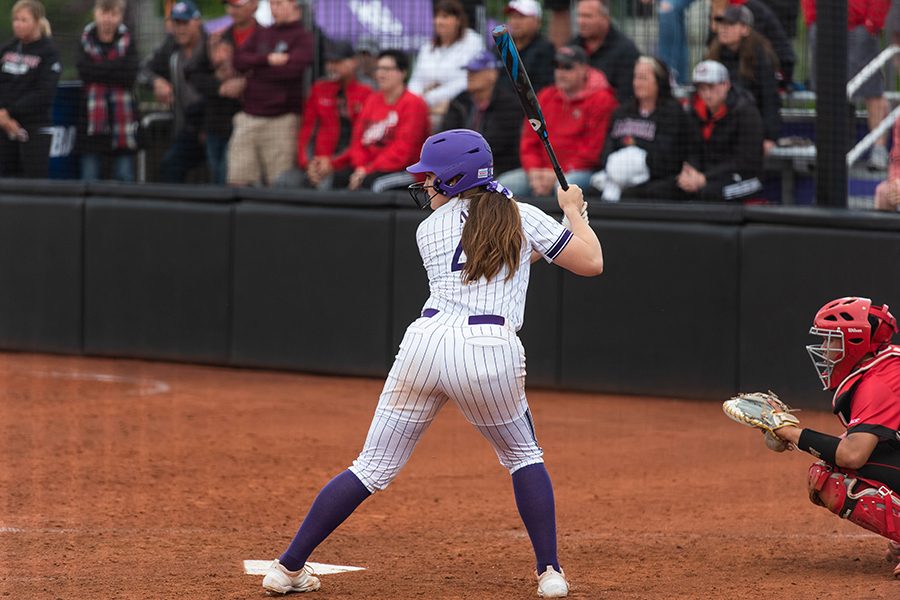 Maeve Nelson takes up her stance. The shortstop was one of many freshmen who made an immediate impact in NU’s best season since 2007.

Each time Northwestern took the field at home this season, Imagine Dragons’ “Machine” blared over the loudspeakers at Sharon J. Drysdale Field.

The song was appropriate. The chorus includes the lyric “I’m not a part of your machine,” indicating that the Wildcats wanted to create their own identity, regardless of what they had done in years past.

Did they ever. NU finished 47-13, its best record since 2007, and the Cats’ 21 Big Ten wins were their most in program history. They had a 20-game winning streak that lasted from late March to early May and won their first 21 games in conference play.

Along the way, NU put itself back in the national softball spotlight and created a palpable buzz on campus.

The story of the 2005-08 teams has been told time and time again — the Cats went to the NCAA Super Regionals four times during that span, won two Big Ten championships and went to the Women’s College World Series twice.

After that, the program stagnated. NU was a regular participant in the NCAA Tournament, with six regional appearances in 10 years, but never had the pieces to make a deep postseason run.

That changed this year. Freshman pitcher Danielle Williams gave the Cats a bona fide ace the likes of which they had not seen in at least a decade. Between 2012 and 2018, NU’s team ERA was never better than 3.41. This season, the Cats pitched to a 1.96 mark, thanks in large part to Williams, who threw 230 of NU’s 397.1 innings and struck out nearly seven batters for every walk.

But Williams was only part of the resurgence. Coach Kate Drohan repeatedly talked about how this team’s story started with the 2018 senior class, which included four-time all-Big Ten honoree Sabrina Rabin and a steady presence behind the plate in Sammy Nettling. Drohan said that class set the course — and their legacy is now coming to fruition.

Complement that with impact freshmen filling in at key positions — including Jordyn Rudd at catcher, Maeve Nelson at shortstop and Skyler Shellmyer in center field — and you get a team that is ready to do more than just make the postseason.

By no means did NU achieve all of its goals this year. The Cats were foiled twice by Minnesota, in both the final regular-season series and the Big Ten Tournament semifinal, and were ultimately eliminated in the Super Regionals by an otherworldly Oklahoma team.

But this season will be remembered for the highs, and the returning feeling that something special was happening at “The J.”

It was felt during a dramatic sweep of Wisconsin in mid-April that gave NU sole possession of first place in the Big Ten. It was felt during a Senior Day comeback win over Purdue on a warm, sunny Sunday afternoon. And it was certainly felt at the Evanston Regional, when the Cats overcame a loss to Louisville in the first-round winners’ game to beat the Cardinals twice a day later and extend their season another week.

And the future could be even brighter. Just two starters graduate from this year’s team, and the returners will be joined by a top-25 incoming class that includes the nation’s No. 10 overall recruit in Sydney Supple.

This year, NU’s season was ended by a machine. It might not be long before the Cats become a machine themselves.