The Daily Northwestern • May 26, 2019 • https://dailynorthwestern.com/2019/05/26/multimedia/audio/the-weekly-a-history-of-the-harley-clarke-mansion/

The Weekly: A history of the Harley Clarke mansion 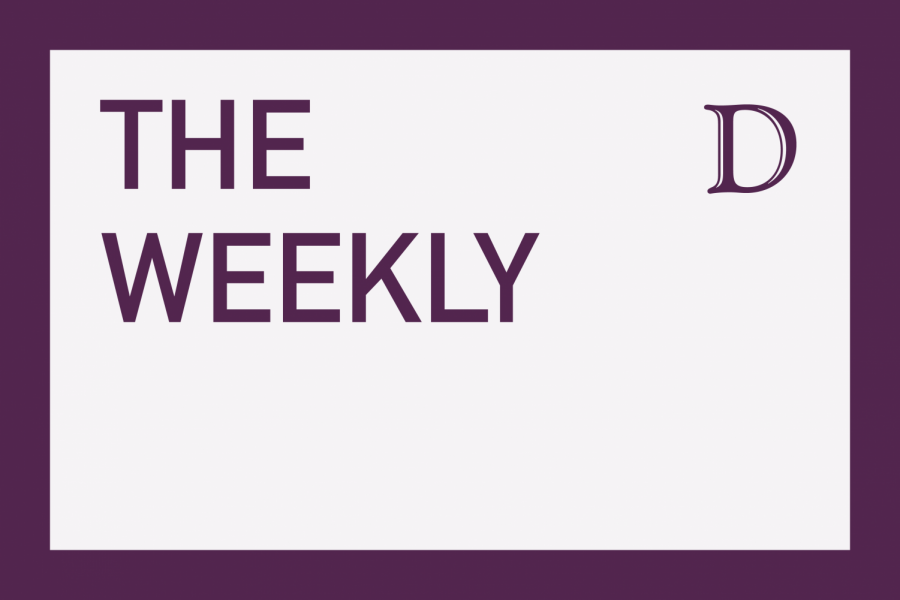 HEENA SRIVASTAVA: From The Daily Northwestern, I’m Heena Srivastava. Welcome to The Weekly. In this podcast, we’ll fill you in on the latest news and give you a deeper look at Evanston’s most hotly contested issue, the Harley Clarke Mansion.

SRIVASTAVA: Black Boy Joy Week, a sequence of programming dedicated to fostering joy in the black community, is wrapping up this Sunday. Organized by The Collective, a community of black men on campus, the week’s events have consisted of a self-care night, basketball game and listening party. Black Boy Joy Week concludes on Sunday with a barbeque.

SRIVASTAVA: Wednesday, Evanston Township High School students held a die-in. The event was meant to memorialize ETHS graduates who’ve been fatally shot and to bring awareness to gun violence. Students wrote names of Evanston gun violence victims on the pavement with chalk, held a rally before school started and took eight minutes to lie on the ground and memorialize the victims.

SRIVASTAVA: Now, for a deeper look at Evanston’s most hotly contested issue. The city has debated it for years. The Daily has covered every twist and turn. The Harley Clarke Mansion. I sat down with one of our reporters who covered it all. Can you introduce yourself?

HANDLER: I’m Samantha Handler. I am a reporter for The Daily Northwestern and have been since fall of freshman year.

SRIVASTAVA: So, this place obviously has a really long history. Can you tell me, what is Harley Clarke?

HANDLER: So Harley Clarke is a mansion. It’s right off of Sheridan Road. It’s three stories. It leads right down to Lighthouse Beach. It’s one of these last huge lakefront mansions built in the 1920s before the 1929 stock market crash. It’s really architecturally valuable because of the stonework, it’s interior, there is a grand spiral staircase. I mean, it’s just kind of the type of architecture you don’t see anymore. This is the only one left in Evanston.

SRIVASTAVA: The mansion’s construction was completed in 1927, 12 years before Harley Clarke and his family sold the house to the Sigma Chi national fraternity. The house was then sold to the city in 1965, and was leased to the Evanston Arts Center for a symbolic one dollar a year.

HANDLER: During that time, city and Evanston Arts Center are not doing maintenance. But this is when residents kind of start to get that sentimental attachment to the property because they come in for art classes, the Evanston School District 65 had field trips there for students to experience the lake. But then 2011, Wally Bobkiewicz, the city manager, says aldermen had been expressing concerns to him about the lack of maintenance, the lack of upkeep and the amount of money that the mansion would eventually start costing the city, so he identifies it as a property that the city needs to start considering other uses for.

BOBKIEWICZ: This evening is meant to be a first step. There may be no additional steps for some of these alternatives. But again, in order for this council to have maximum flexibility to maintain the citizen experience in this community, I believe it’s important that we look at all options.

HANDLER: So 2011, they start considering other uses for the mansion. Around 2012 they issue their first request for proposal period which is just the city saying we want businesses, nonprofits, whoever to send us proposals. 2013, there was a proposal to turn the mansion into a 57-room boutique hotel from Jennifer Pritzker of the Pritzker family. And that was when residents really started coming out for Harley Clarke. It had been the Evanston Arts Center for about 50 years. But in 2013, when that hotel was proposed, suddenly it wasn’t going to be public property anymore. Suddenly it was going to be private, commercial property. And people started putting up signs like don’t turn our parks into profit. And that’s when Harley Clarke mansion became on Evanston’s radar.

PUBLIC COMMENT AT CITY COUNCIL: The people in this city can use that and have a venue there that benefits everyone not for a private investor.

PUBLIC COMMENT AT CITY COUNCIL: That the city would sell off something as priceless as a portion of its limited lakefront was to me unfathomable.

HANDLER: That is shot down because of all this public backlash. Then in 2015, the Evanston Arts Center Officially moves out. The mansions now been vacant ever since 2015. In 2014, the city also considered another plan with the Illinois Department of Natural Resources. But with the election of Governor Bruce Rauner at the time, the state of Illinois was then about to start that three year stalemate with the budget so the state did not have the money to take over the mansion anymore. And that plan fell apart. It was that moment, in 2014, 2015, Pandora’s Box of Harley Clarke opened.

SRIVASTAVA: So, what does that mean?

HANDLER: When Evanston Lakehouse and Gardens formed. They started two years of talks basically with the city to turn it into this coastal education center where kids were going to be able to come in and learn about the lake and all the ecosystems around it. They were going to be parts of the mansion for office space. Maybe there would be a restaurant or a little café for people at the beach. It was around 2015, 2016, when Evanston Lakehouse and Gardens, they went through the committee process, presenting their plan. And then the committee recommended the plan to the council. Evanston Lakehouse and Gardens was the only respondent to that request for proposal period. So the city basically agreed to form an agreement with them. And then a few days before the vote, the final vote on the lease, they find out that this other group, Evanston Lighthouse and Dunes has been talking with alderman about how they don’t think that the Lakehouse and Gardens group can fundraise in time. And they start talking to alderman about their plan for demolition.

ALD. ANN RAINEY (8TH): …to begin the process that will result in the city’s acceptance of their generous financial support leading to the immediate restoration of the dunes to their natural state, to the removal of the house and the coach house, being Harley Clarke.

HANDLER: That was kinda went everything went to hell. Residents would come out and speak for hours at council meetings about what the city should do with Harley Clarke. I went to the meeting where council denied the Evanston Lakehouse and Gardens lease. And I remember the city editor Syd Stone telling me ‘Oh yeah, they’ll probably approve it.’ I wrote up the story like they would approve it. And I sat there and I texted her they just denied it. People are pissed. That’s when Evanston Lakehouse and Gardens forms their political action committee, Save Harley Clarke. They had heard about this demolition plan and they wanted to get a referendum on the ballot asking if Evanston residents wanted to preserve the mansion for public access. Was in November of 2018.

SRIVASTAVA: And results of the referendum?

HANDLER: Eighty percent of residents said they wanted to preserve the mansion. But it’s important to note that the referendum was advisory so it was not legally binding. But Mayor Steve Hagerty said at a pretty recent City Council meeting sometime in March that everything is still on the table. That demolition is still an option.

HAGERTY: Harley Clarke does present an opportunity to our city. Our job is to reset the table.

SRIVASTAVA: So, where are we now?

HANDLER: So now, a huge difference between now and say 2013, even really 2015, is residents are really organized. There’s Friends of Harley Clarke, Harley Clarke Community, and then Evanston Lakehouse and Gardens and Save Harley Clarke. Evanston Lakehouse and Gardens still wants to put forth another proposal. They are planning to respond to this third request for proposal period. There is also an Evanston resident who has said she could put up about $500,000 I think to turn the mansion into a bookmaking, printmaking place for artists. But everything is really up in the air. And it will be until February of 2020 when the request for proposal period ends and council enters into negotiations with another group.

SRIVASTAVA: Why do you think people care so much about this public space?

HANDLER: For a lot of it, it is the architectural significance of the building. The building itself is a landmark. After the sudden denial of the Lakehouse and Gardens lease people felt it wasn’t a democratic process. All happening at like 2015 through 2018, when national politics were really heating up, some people saw it as a way to get involved in local issues. They were really upset about national politics going on at the time, but they can’t do anything about that, whereas they can try to save this mansion. I think people just see this kind of symbolism in having this huge mansion that can be everybody’s mansion on the lake. Very few people can afford a mansion on the lake.

SRIVASTAVA: What is the biggest takeaway you want readers to get from this story?

HANDLER: Really just that this is a mess right now. And we don’t know what’s going to happen. The city has tried everything really. And that’s been the history of it. That it’s a mess.

SRIVASTAVA: To give a glimpse of Harley Clarke’s significance to the Evanston community, we included some public comments given by Barbara Barewin Riley, Chris Kruger and Allie Harned, local residents. These comments were given at a City Council meeting in July of last year when the possibility of demolition was at a high.

BARBARA BAREWIN RILEY: Many of us in Evanston are hurting. Harley Clarke may soon be listed in the obituaries. Harley has been in hospice on life support, and now, a few wealthy citizens have captured the minds of the council with an easy fix: to disconnect the support, to pull the plug over the objections of thousands of Evanstonians.

ALLIE HARNED: I’ve had the opportunity to speak to a number of you and I’ve really appreciated the time that you’ve given me. I also have been busy spearheading a citizen group we call Save Harley Clarke, a group that is now just ten days old and includes a phenomenal group of volunteers representing all wards, ages and socioeconomic groups in Evanston who believe in the potential adaptive use of Harley Clarke will benefit the city for many years to come. We have worked extremely hard in the past 10 days to put a referendum question on the ballot […]. In just ten days, our amazing crew of over 50 volunteers have collected 3,245 signatures of Evanston voters.

SRIVASTAVA: Thanks for listening. This is Heena Srivastava, and I’ll see you next time.