The Daily Northwestern • May 23, 2019 • https://dailynorthwestern.com/2019/05/23/sports/softball-notebook-cats-excited-for-challenge-ahead-of-this-weekends-super-regional/

Softball Notebook: Cats excited for challenge ahead of this weekend’s Super Regional 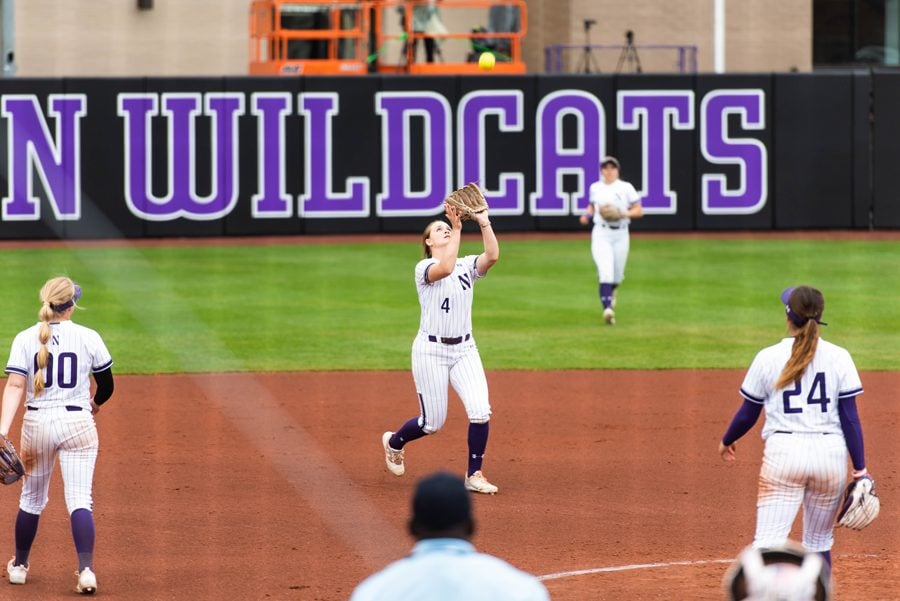 Maeve Nelson makes a catch during a game in the Wildcats’ home NCAA Regional. NU will return to the field this weekend against Oklahoma in a Super Regional.

Ahead of its first NCAA Super Regional since 2008, Northwestern was already chomping at the bit to get on the plane to head south and face No. 1 Oklahoma, coach Kate Drohan said.

“We’re all excited, but I can’t say anyone’s surprised,” she added. “This was part of our plan all year, so it’s a good excitement.”

As the Evanston Regional champions, the No. 16 Wildcats (47-11, 21-2 Big Ten) are set to play the Sooners (52-3, 18-0 Big 12) this weekend. The Daily heard from freshman catcher Jordyn Rudd, associate head coach Caryl Drohan and Kate Drohan about the team’s thoughts heading into the trip to Norman.

In the national spotlight

Though NU has received increased national coverage from the end of the regular season to the postseason, this weekend brings the highest level of attention so far. Tickets to the series sold out in three minutes, and each game will air on the ESPN family of networks. Friday’s game will air on ESPN2, while Saturday’s — and Sunday’s, if necessary — will be on the network’s flagship channel, ESPN.

Kate Drohan said the media attention is great for the team but also for softball overall.

“The growth of our sport, in general, with our television coverage, the attendance numbers, the attendance we had here at the J over the weekend — it’s a great sport to watch,” she said. “It’s a great tempo, and it keeps getting better and better, so I think we’re excited about the spotlight.”

For Rudd, a first-timer in the NCAA Tournament, the increased attention is exciting.

“That’s just amazing that we can go out there and there’s a bunch of people watching,” she said. “Maybe — hopefully — we’ll turn a lot of them into Northwestern fans.”

Unlike their semester-school opponents, however, the Cats still have to focus on their classes, and managing both academics and softball has sometimes been challenging.

“It’s a lot, but we’re really good at managing our time,” Rudd said. “We’ve learned that over the course of this year, and the coaches really help.”

In fact, Kate Drohan said she’ll be monitoring a physics exam for junior outfielder Morgan Newport on Thursday, and that freshman shortstop Maeve Nelson had an engineering exam before last Friday’s regional game.

Though NU’s rigorous academic atmosphere may be difficult to balance with sports at times, Kate Drohan said the team is used to juggling both.

“It’s who we are,” she said. “Our young women chose Northwestern because we have such a great academic environment to offer, so that’s not a negative thing in our mind at all.”

The Big Ten in the Tournament

NU is one of only two remaining Big Ten teams in the tournament, after Michigan, Wisconsin, Illinois and Ohio State were all eliminated last weekend. However, Minnesota — whose pitching silenced Northwestern in the Big Ten Tournament — will stay at home and welcome LSU to Minneapolis.

Caryl Drohan said the Cats’ experiences struggling early on in the batter’s box against teams like Minnesota during the regular season has prepared them to take on the Sooners.

“In-game, the most important thing you can do as athletes is stay confident and know that you have to be better the next pitch than you were the previous pitch — you don’t need to reinvent anything,” she said. “We’ve worked on that certainly in the past few weeks, and I think we’ll see that this weekend.”