The Daily Northwestern • May 22, 2019 • https://dailynorthwestern.com/2019/05/22/lateststories/local-artist-tells-family-migration-story-from-alabama-to-evanston-in-up-from-down-home-exhibit/ 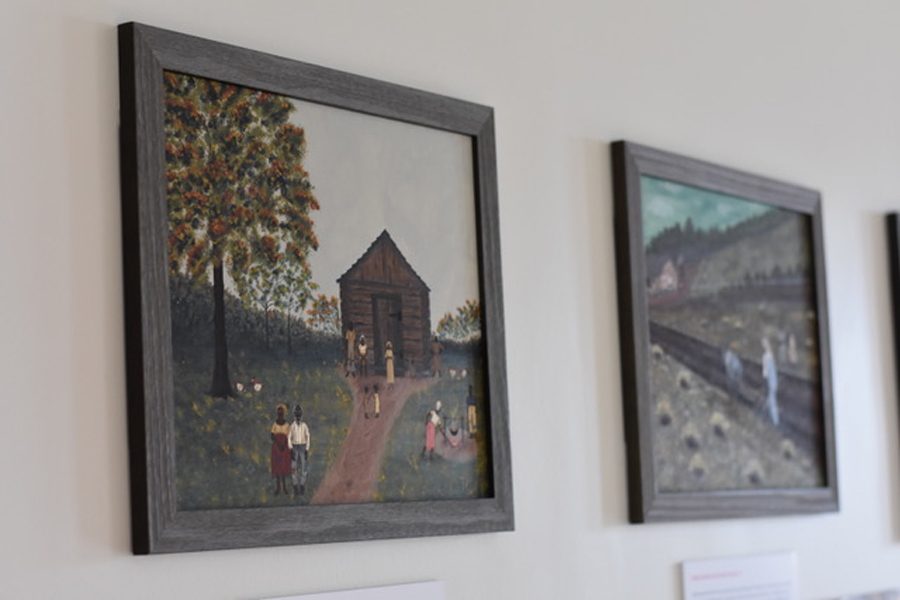 Part of the “Up from Down Home” series by local artist Jevoid Simmons. The new exhibit opened at the Lorraine H. Morton Civic Center on May 10.

Local artist Jevoid Simmons’ family was forced to flee Alabama in the early 1950s because of threats from the KKK. Today, through his exhibit “Up from Down Home,” Simmons tells the story of his family’s migration from the South to Iowa and then to Evanston, where they eventually settled.

“The exhibit is a personal story, it’s a family story,” Simmons said. “And from a context standpoint, there’s the broader migration pattern that we were a part of.”

Seventeen paintings and accompanying narratives are displayed along with 40 carvings of family and friends. The exhibit, currently on display at the Lorraine H. Morton Civic Center, was previously showcased at the Noyes Cultural Arts Center and the Evanston Art Center.

Simmons said he decided to start the series when he realized some of his siblings didn’t know their family’s history. The oldest and youngest of the 16 children are 25 years apart. Simmons said he saw communicating their family story as part of his duty as one of the oldest siblings.

“It was an important part of connecting our generations, the past, the present and the future generations for my family,” Simmons said. “On the broader scale… I don’t want (my family story) to slip, lost in time.”

Simmons said others should work to ensure their own family stories are documented as well.

Simmons said he appreciates art because of this personal element. He said he never studied art, and never even took an art class after middle school, but always saw his family members express themselves artistically. His biggest inspirations are artists who tell stories through their work, Simmons said.

“‘Up from Down Home’ stood out because it is not only visual art, but storytelling as well,” Martínez said. “The powerful narrative of the migration of a black family to Evanston is rarely found in the way that Jevoid Simmons has been able to portray it and represent it.”

Martínez said Evanston residents have had a positive response to the exhibition. Over 60 attended the exhibit on opening night, May 10, with more visiting each day, she said.

Nina Kavin, co-founder of community activism group Dear Evanston, found Simmons’ family migration similar to the story of the Israelites leaving Egypt, which her family recounts every Passover. She said she appreciated that his story was not only personal, but also spoke to the universal narrative about moving from oppression to freedom.

Simmons’ next project is a series he plans to call “Seven Seconds,” which will deal with how police violence has inordinately impacted people of color. He said he plans on using a similar style of painting and wants to capture the moment before a tragic decision is made.

Simmons said the story of police brutality has been “burning on my heart” and he likes the freedom of doing art on his terms so that he can tell the stories he wants to tell.

“Art has always been personal and not so much about wanting to be commissioned by anyone to do anything,” Simmons said. “That would be like a job. I’ve had jobs before.”