The Daily Northwestern • May 22, 2019 • https://dailynorthwestern.com/2019/05/22/lateststories/fusion-restaurant-stacked-folded-social-house-opens-second-location-in-evanston/ 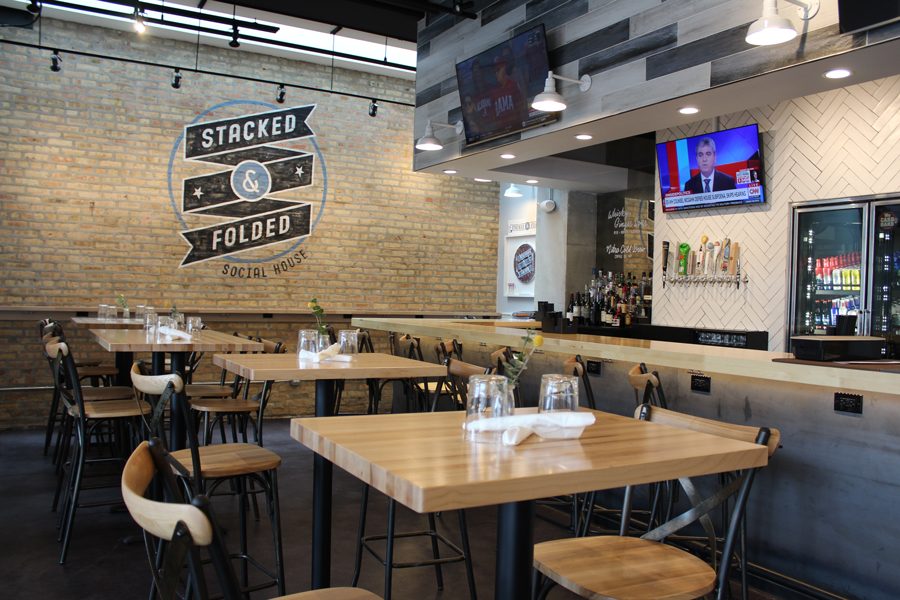 Stacked & Folded Social House serves up dishes like a short rib banh mi and an ahi tuna poke bowl. The new Noyes Street restaurant is open for lunch and dinner every day of the week.

Stacked & Folded Social House opened to the public on Monday, hoping to bring new flavors to Noyes Street with fusion dishes of tacos, sandwiches and salads.

Chris Rimer, the establishment’s general manager, said the new fusion restaurant “fills a void in the area” with its “bright and cheery” dining room, full-service lunch and dinner menu, and bar.

“The restaurant is located in the middle of where students and families live,” Rimer said of the space, located at 824 Noyes St. “We are here to serve both groups, which are the best of the best in this community.”

Stacked & Folded’s Evanston restaurant is the group’s second location, joining a shop that opened in Winnetka in 2015. Joshua Lee Keating, executive chef and owner, described the Winnetka restaurant as “small and more of a sandwich joint.” Over the years, customers have requested a sit-down dining room, and Stacked & Folded’s Evanston locale is making this request a reality.

Keating said Stacked & Folded’s menu is “an enhancement” of what is offered in Winnetka. He plans to add dishes in response to customer feedback, as well as showcase classics like the short rib banh mi and ahi tuna poke bowl. The Evanston location also gives Keating the opportunity to “grow into a dinner menu.” He plans to develop bar bites and light fare offerings like appetizers, in addition to rotating specials.

“We are in service to this community, and we will adapt to what it wants to eat,” Keating said. “It’s also important to me to support local businesses, so everything’s locally sourced.”

It’s crucial to Keating that Stacked & Folded’s food is considered “to die for,” but he also wants to ensure it can be enjoyed by everyone. The chef has a culinary nutrition degree and is conscious of dietary restrictions and allergies. Stacked & Folded has a dedicated gluten-free fryer and special pans to avoid cross-contamination. Keating said staff are trained to accommodate allergies and dietary restrictions and follow strict protocols.

In addition to the main dining room, the Evanston restaurant has outdoor patio seating. Rimer said there are televisions and speakers throughout both spaces to screen Northwestern sports games. He added that outlets are placed around the dining room for students to plug in while they eat.

As for Stacked & Folded’s bar, Keating said the establishment is the first restaurant on Noyes Street to have a full liquor license. He brought bar manager Jill Harvey on to the team to spearhead all things alcohol. Harvey said she is “really excited” to offer creative cocktails and craft beers.

“There are a lot of breweries opening in Evanston, which shows that the brewery movement is alive and well here,” Harvey said. “I love having local options.”

“At Stacked & Folded, we are a family, we are not a corporation,” Keating said. “We are a group of passionate individuals serving those who come to this gathering place.”