The Daily Northwestern • May 21, 2019 • https://dailynorthwestern.com/2019/05/21/sports/womens-golf-northwestern-struggles-in-third-round-of-ncaa-championships/

Women’s Golf: Northwestern struggles in third round of NCAA Championships 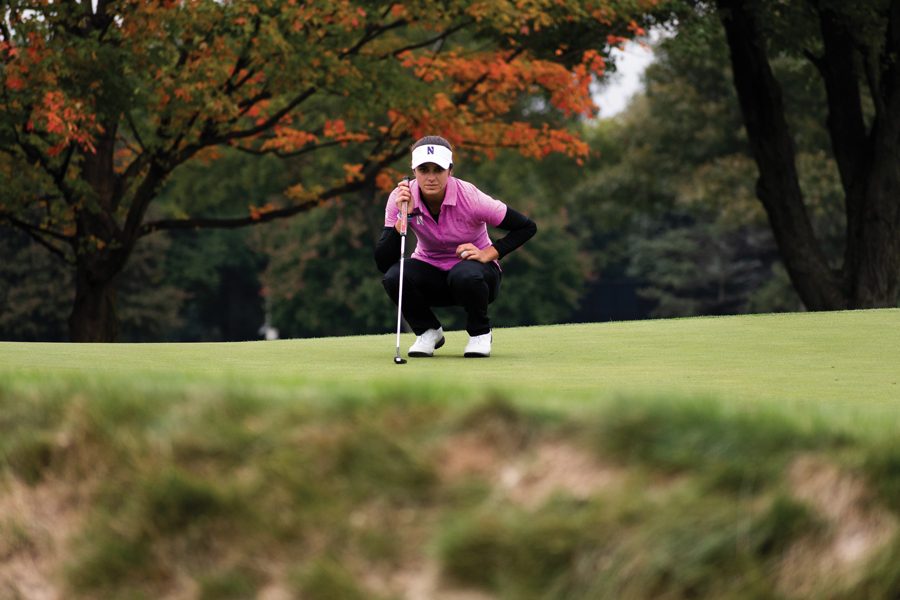 Brooke Riley surveys the green. The junior had Northwestern’s best individual performance in round three of the NCAA Championships, but the Wildcats will likely miss the cut for match play.

Northwestern entered the final day of the opening portion of the NCAA Championships in eighth place, only needing to hold serve to be one of the eight teams to qualify for match play. The Wildcats were four good rounds away from winning the first national championship in program history.

But double, triple and quadruple bogeys cancelled those plans, and NU shot its way out of tournament contention with a 26-over-par round Monday at the Blessings Golf Club in Fayetteville, Arkansas.

Since junior Brooke Riley and freshman Kelly Sim had three combined holes left when play was suspended due to darkness, the Cats will formally finish the tournament Tuesday. After shooting 49-over the first three rounds, NU is 11 strokes back from the eighth spot it needs to reach to advance.

Since the Cats need to make up 11 shots with so few holes left, it is statistically improbable that they will move on. Their season will likely end early Tuesday as NU will not qualify for match play for the first time since 2012.

The Cats finished 13th among the 24 teams that made it to the championship round, ranking just below Big Ten rivals Purdue and Illinois. Texas is currently at the top of the leaderboard, holding an eight-shot lead over Duke with a few holes left for both teams. The Longhorns have scored 6-over the first three rounds, which is 43 shots better than the Cats’ final total.

Riley leads NU with a 12-over score over three days, and Sim and senior Janet Mao are both at 13-over. But senior Stephanie Lau and freshman Kelly Su finished at 27- and 30-over, respectively, and they both contributed to the Cats’ drop in the standings on day three.

Auburn leaped NU to take command of the eighth spot with three holes remaining for the Tigers, and the Fighting Illini, Florida and Florida State also jumped the Cats on Monday. NU took the eighth-place spot by shooting a 294 team score on Sunday, which was one of the three best one-day totals in the entire tournament. But it has taken the Cats over 300 shots to finish the third round, leading to their five-spot drop in the standings.

NU is slated to finish higher than its No. 16 national ranking, so statistically the Cats exceeded expectations in Fayetteville. The team returns three starters, and Riley, Sim and Su were three of the top four performers over the season. But as they both finished their 18-hole rounds, Monday marked the end of Lau and Mao’s collegiate careers.