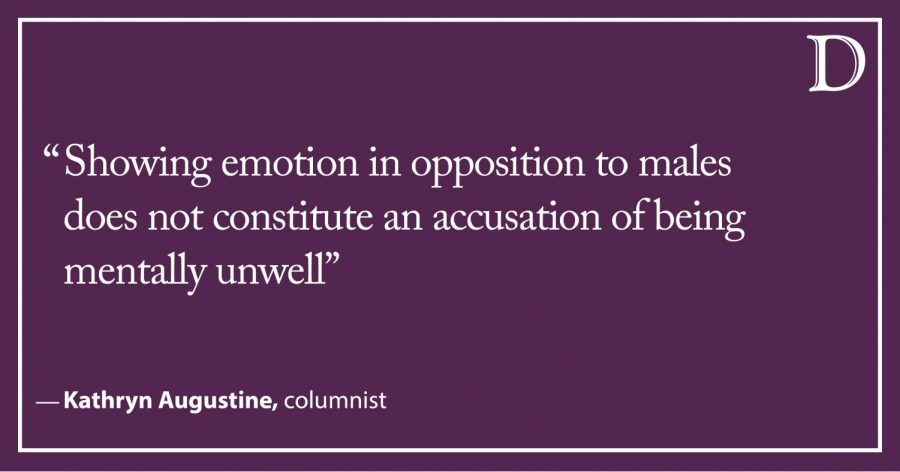 The overarching theme that unifies the instances in which women are branded as crazy by men is the invalidation of their experiences, emotions and beliefs. This invalidation, in turn, conjures self-doubt and dismantles the self-confidence of women.

In September of 2018, Dr. Christine Blasey Ford publicly disclosed her experience of sexual assault at the hands of Brett Kavanaugh and testified against Kavanaugh on national television. The Drudge Report, founded and edited by Matt Drudge — a white male — attempted to publicize an article titled “Something’s Wrong with Her” on Twitter, in which her alleged students call into question not only her teaching ability, but her personal characteristics as well. These reviews by students were actually for a different Christine Ford.

The Drudge Report’s desperation to portray Ford as crazy and deranged, implied by the title, illustrates a direct attempt to invalidate and silence a woman whose story poses a potential threat to a man’s desired political power. The logic here is that if Ford is portrayed as a crazy professor who lacks any teaching ability, then her accusations cannot be valid and Kavanaugh can rise in the ranks of the United States government.

Yet, that logic is faulty nonetheless. Even if that article presented accurate statements regarding Ford’s teaching and personal characteristics, does that mean she deserved sexual assault? Does that automatically mean that she was lying or dramatizing her experience?

During a heated argument, it’s not out of the ordinary to hear a man exclaim with exasperation, “You’re crazy,” in response to a woman who proposes a complaint regarding his behavior. The phrase “You’re crazy” sends the message that a woman is mentally unwell since she is in disagreement with the actions of a man. In reality, the man is unwilling to validate her concerns and change his actions in accordance and instead, uses “crazy” as a tool to silence her.

Also in September of 2018, Serena Williams was accused by umpire Carlos Ramos of receiving coaching from the sidelines during the U.S. Open final match against Naomi Osaka. Rather than accepting the warning that he issued complacently, Williams pushed back. She denied receiving any signals from her coach and asserted that she’d “rather lose” than partake in cheating of any form. Just minutes later, Williams threw her racket on the ground of the court after a missed shot. She received an additional penalty, and proceeded to rightfully point out the inherent sexism after the match.

Male athletes voice their opposition to referees and react violently when they feel a situation is unfair. Let’s not forget Marcos Baghdatis, who destroyed not a single racket but four rackets in under a minute. And yet the names of these men are not soiled with accusations of insanity. Jim Courier, a former Australian Open champion, instead viewed Baghdatis’ actions as a “raw moment” and hoped Baghdatis racked up views on Youtube.

Williams’ and Ford’s experiences are not isolated incidents. Women are accused as crazy or delusional both in and out of the public eye. Showing emotion in opposition to males does not constitute an accusation of being mentally unwell. Women, like men, are allowed to be angry without being perceived as crazy.

Kathryn Augustine is a Medill first-year. She can be contacted at [email protected] If you would like to respond publicly to this op-ed, send a Letter to the Editor to [email protected] The views expressed in this piece do not necessarily reflect the views of all staff members of The Daily Northwestern.