The Daily Northwestern • May 21, 2019 • https://dailynorthwestern.com/2019/05/21/lateststories/from-the-newsroom-how-the-daily-has-expanded-its-multimedia-efforts/

From The Newsroom: How The Daily has expanded its multimedia efforts 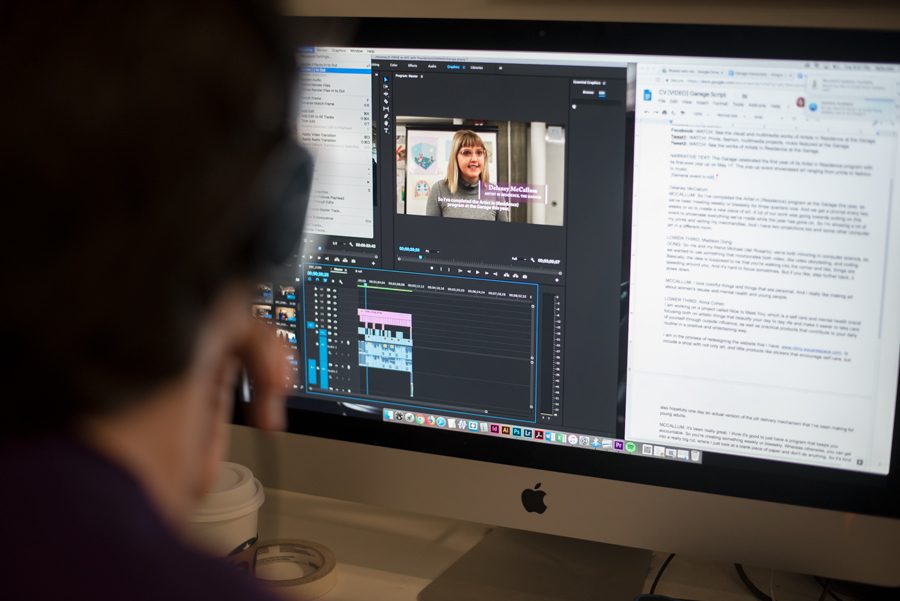 A Daily staffer edits a video. In recent years, the video desk and other multimedia sections have expanded the scope of their coverage.

In this series, Daily staff members hope to provide more transparency about how we operate. If you would like to submit a question to be answered here, please send an email to [email protected].

When you think of The Daily, what comes to mind? Chances are, you recall one of our news stories, an investigative article, an opinion column or a breaking news brief.

But there’s more to The Daily.

If you’ve scrolled through social media, especially over the past few quarters, you’ve probably seen the words “WATCH” or “LISTEN” preceding a fair number of our posts, followed by a new video or a flashy podcast logo.

Those are produced by our teams of dedicated multimedia journalists.

Print stories were one of The Daily’s only ways of conveying information to our audience during the grand majority of our nearly 140 years of existence. In 2008, that all changed when The Daily published its first video on YouTube. About four years later, we published our first podcast. In the past, however, our multimedia content consisted mainly of round table discussions with Daily reporters or other journalists — video and audio stories that contained on-the-ground reporting were few and far between.

Looking back, that was a problem. Multimedia journalism has a unique power to humanize stories, to put faces to the issues we’re covering, to amplify the voices of marginalized individuals and communities — in their own words — who may have been either misrepresented or not covered at all in the past. While the written word has stood and will stand the test of time, these newer forms of news reporting can help provide a more direct line of communication between our sources and our audience — you can see and hear their stories for yourselves. In the last few quarters, we have been striving to take full advantage of multimedia’s ability to do so.

Although this effort has been strengthened recently, it is by no means new. Past Daily editors introduced a slate of podcasts including The Weekly, our flagship news podcast, and The Spectrum, a podcast based on an opinion series of the same name dedicated to providing a platform for marginalized writers.

We’ve aimed to use these media to humanize issues on campus and in Evanston, covering everything from how the parents of Evanston gun violence victims have dealt with the loss of their children to the low-income experience at Northwestern to Chicagoans’ reactions to the inauguration of their first black, female, openly gay mayor.

We don’t always do a perfect job — sometimes, it’s far from stellar — but we strive to take in audience feedback and implement it with each new piece of multimedia content. A massive part of institutionalizing these desks, both internally at The Daily and externally for our audience, is ensuring that we are covering marginalized communities and the issues they face fairly and fully.

Over the past two years, The Daily’s specific efforts to achieve these goals have included multiple video series and short documentaries. We’ve also rebranded The Weekly to move away from one-on-one interviews, which previously constituted the majority of The Weekly, to a more heavily reported and edited narrative style. On social media, we launched section-specific Twitter accounts to further target readers and build a better relationship with our audience, while also posting more frequently and intentionally on our Instagram account. And while Wide Angle is no longer a staple of The Daily’s print edition, we have made a more concerted effort this quarter to publish more photo spreads both online and in the paper itself.

By opening up more avenues to tell stories, we broaden the range of stories we can tell and voices we can include. Our first video series last winter looked at the history of immigration to Cook County, a topic that may have been considered too general for a daily newspaper to cover in print, but just right for a documentary explainer series. The Daily looks at the stories we want to tell, asks what medium would be the best fit and launches new multimedia series or projects when a print story is not the right answer — and more often than we expect, it isn’t.

Of course, multimedia reporting has its drawbacks as well. When covering sensitive issues that sources may be squeamish speaking out about, the presence of a camera or microphone can further deter them. If a source wishes to speak to us anonymously, orchestrating a multimedia piece around that is more difficult, though not impossible. But by building trust with our sources and clarifying that we want to take photos, film video or record audio of them to further amplify their voices, the impact The Daily’s multimedia coverage can surprise even those of us who produce that content.

The last 130-some years of The Daily have been primarily print-centric. But in the last decade, we have made strides in both our quantity and quality of multimedia content. As video, audio, photo and other forms of multimedia continue to evolve, The Daily must evolve with them to best serve the communities we hope to cover and build trust with.