The Daily Northwestern • May 21, 2019 • https://dailynorthwestern.com/2019/05/21/city/expressing-frustration-residents-disrupt-playing-of-video-at-robert-crown-community-meeting/ 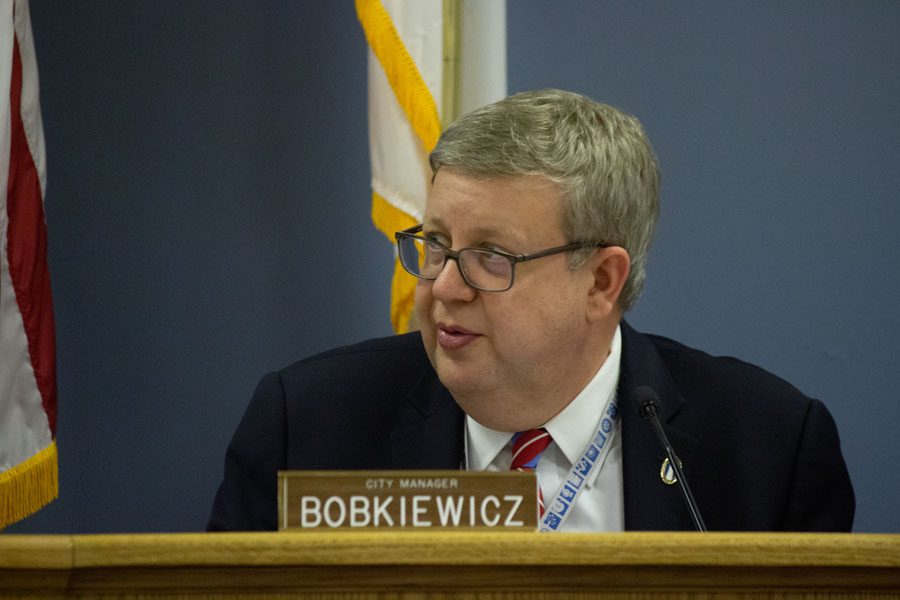 City manager Wally Bobkiewicz during a community meeting in May. Bobkiewicz will be leaving his position for a new job in Issaquah, Wash. at the end of September.

Residents shouted throughout a 90-minute long video the city presented at the Robert Crown community meeting Monday. The video started the meeting, which was set to “focus on project costs and financing” and did not have a posted agenda.

“What are you going to cut to pay for this?” chanted some Evanston residents over the video, which continued to play over their cries.

About 35 residents attended the meeting hosted by city manager Wally Bobkiewicz. When staff ignored resident cries and continued to play the presentation, many residents flooded out of the council chambers.

Before the meeting, residents were asked to submit questions through index cards, which Bobkiewicz and city staff answered after the presentation ended and during a short period when the presentation faced technical difficulties.

Evanston resident and Poor People’s Campaign member Meg Welch said index cards are a way for the city to “control the discussion.”

Welch said the costs of the project will increase taxes and force the city to cut back on services, a concern vocalized at prior town halls and community meetings. She emphasized that residents concerned about affordability need to also be concerned about the project.

“We have been through this over and over and we’re done,” Welch said. “(The debt) is going to go up. And, conveniently for … the people that are sitting on the city council … they won’t be around.”

According to Evanston resident Misty Witenberg, the city prioritizes maintaining a certainty for Friends of the Robert Crown Center donors but does not give residents the same respect. She said city staff behavior has contradicted the organization chart on the city website, which puts Evanston residents at the top.

Wittenberg did not agree with the process of submitting questions through index cards, but still continued to write questions.

“I did make sure I was clear earlier and let them know that this was not acceptable,” Wittenberg said. “I’m going to continue working through his process, but I’m also going to continue to hold them accountable.”

City clerk Devon Reid said community meetings offer a space for public comment and said residents are “justifiably upset” about the way the meeting was run.

Reid said the meeting may be in violation of the Open Meetings Act, which regulates meetings of all public bodies. The law requires the city to “properly notice” a meeting when conducting city business with more than three aldermen, according to Reid.

The community meeting had five aldermen present but neither an agenda was posted nor were minutes kept. Reid plans to bring the possible violation up with the attorney general office.

Bobkiewicz said the city chose to present a video to ensure all the information was given out.

He said he’s unsurprised some residents are dissatisfied with this meeting. Two similar meetings have been held in the last six months, according to Bobkiewicz.

“Our challenge is we answer the question and then get shouted down,” said Bobkiewicz. “We’re answering the question to the best of our ability… They’re not getting the answer that they want or think is correct. How do you have that kind of dialogue?”