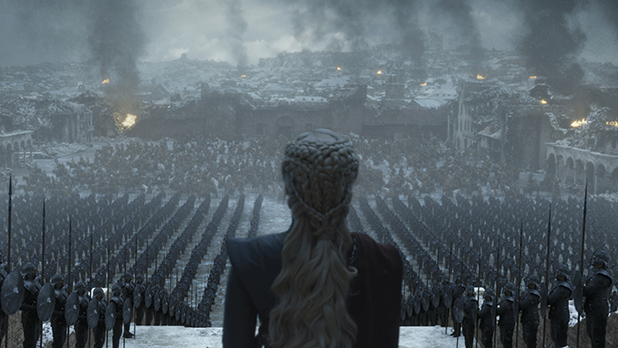 Daenerys Targaryen addresses her army during her brief reign as Queen in Sunday’s finale of “Game of Thrones.” Daenerys’ season eight turn from savior to tyrant was seen as rushed and unearned by many critics.

On Sunday night, HBO’s fantasy epic “Game of Thrones,” a cultural phenomenon that reached unprecedented heights and has been showered with awards, came to a close after a final season many considered uneven and rushed. For Medill junior Ryan Coleman, who started a podcast about the show and has talked about it “every day” for years, the finale brought an overwhelming sense of emptiness.

The dragon-sized void “Thrones” will leave in Coleman’s life was exasperated by what he saw as the inconclusivity of the finale. While praising the cinematography and acting, critics have knocked the writing of the eighth season, accusing the showrunners of prioritizing plot points rather than earning them through the character development that has anchored the show since its beginning in 2011.

After the much-predicted climax of the season occurred — honorable leader Jon Snow killing his lover and aunt, the hero-turned-villain Queen Daenerys Targaryen — Coleman said he felt the show veered towards unreasonableness by keeping Jon alive, thereby guaranteeing a happy ending for the Stark siblings, some of the protagonists of the show. He was particularly upset the show cut to a meeting of the lords and ladies of Westeros that occured weeks after the regicide rather than the characters’ immediate reactions to the murder.

Communication sophomore Annika Weinberg also had mixed feelings about the finale. She said she struggled specifically with the decision to go for a “happy ending” of a montage of all of the Stark children living their dreams in a show known for subverting expectations and adhering to a mantra uttered by villain Ramsay Bolton in season three — “If you think this has a happy ending, you haven’t been paying attention.”

“I didn’t expect all of the Starks to be able to live out their dream at the end,” Weinberg said. “The Starks are my favorite family in the show and I think they’re the favorite for a lot of people, so I was just a little bit confused as to all of them coming full circle perfectly with their storylines.”

Ange Toku, a Weinberg sophomore who said he is an “obsessive” fan of the series, also felt character development was rushed in the final season and somewhat abandoned in the finale. Toku said he thinks Daenerys’ loyal military leader Grey Worm would have killed Jon, as he’d previously threatened, rather than taking him prisoner. However, he said he is less critical of the finale than most and believes the major characters saw their arcs completed.

Both Toku and Coleman said they believe the lackluster reception to the eighth season will detract from the show’s formidable legacy. Coleman said he fears the ending “tarnished” Thrones’ ability to be considered the best show possible. While Toku certainly understands the criticism and even shares some complaints, he said Thrones got so large that its conclusion could not have possibly been totally satisfactory.

“There was a couple years between the end of season seven, start of season eight,” Toku said. “That kind of built up a lot of expectations. I don’t think it could have really ever lived up to them, expectations were just so insane.”

Despite the flaws of the ending, all three students said they will miss the series and the cultural significance it inspired, from the fan community to the lasting impressions of the its iconic characters. The unsatisfactory ending will make immediate appreciation difficult, Coleman said, but he believes the show will be regarded as historically influential in the future.

Weinberg said she will miss her investment in the characters the most, and the feeling that her time watching was being rewarded by the immense growth characters displayed. While she initially disliked Sansa Stark, watching her progression from a whiny child to a formidable leader exemplifies the character development the show provided.

Weinberg also said she appreciated how a fantasy show could be such an effective window into modern politics, especially as exemplified by the decision in the finale to move Westeros towards democracy.

For Toku, the creations “Game of Thrones” inspired — from YouTube fan theory channels to new friendships — will be missed. He said the final season’s struggles and the analysis it incurred ultimately serves as a testament to the series’ cultural significance.

“I haven’t seen a show see this much support or this much criticism, which still speaks to how widely popular it is,” Toku said. “Definitely gonna miss all that — the good and the bad — going forward.”

Related Stories:
– Podculture: Daily staffers talk ending theories, reflect on eight seasons of ‘Game of Thrones’
– Students get in on “Game of Thrones” hype from abroad