The Daily Northwestern • May 21, 2019 • https://dailynorthwestern.com/2019/05/21/campus/northwestern-was-a-pilot-school-for-sats-adversity-score-to-assess-a-students-privilege/ 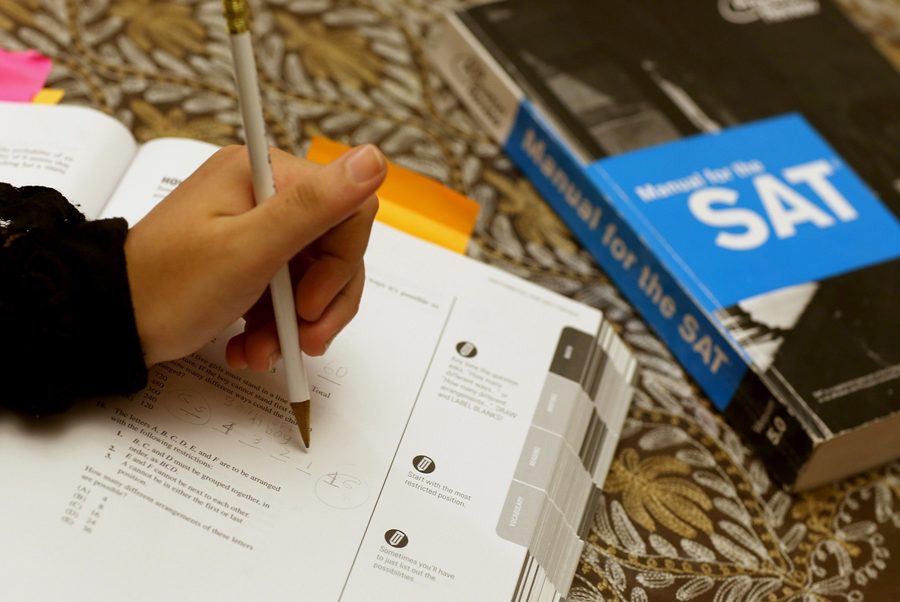 An "adversity score" will be added to SAT college entrance test results, rating applicants on environmental factors meant to offer admissions officers a glimpse into a student's socioeconomic background, the College Board said Thursday. Northwestern was among the schools who participated in a pilot program.

The College Board plans to assign SAT test takers an adversity score that aims to capture their social and economic background, the company announced Thursday, an apparent attempt to remain relevant amid criticisms that it reinforces social inequities.

The mark will not impact test scores, but instead supplement it with additional neighborhood and high school data to contextualize a student’s performance. The initiative will score students on a range from 0 to 100, with 50 as average and higher scores demonstrating more “adverse” environments, the company said through a spokesperson. College counselors will be able to access the scores through the Environmental Context Dashboard, though it will remain a secret to students.

About 50 schools participated in a pilot program of the dashboard, the company said. Northwestern was among the schools, though it said Monday that it did not use the score to make admission decisions.

“We’ve always evaluated students’ academic and personal records in the context of their high school and community settings, and some of the dashboard data can be helpful in that effort,” University spokesman Bob Rowley said in a statement, though he did not say whether the school planned to use the information in the future.

Chris Watson, the dean of undergraduate admission, did not respond to an email seeking comment.

The College Board hopes the program will better highlight overlooked students who have faced disadvantageous upbringings. Critics of college entrance exams have said they reflect a student’s privilege better than their academic ability.

“There is talent and potential waiting to be discovered in every community – the children of poor rural families, kids navigating the challenges of life in the inner city, and military dependents who face the daily difficulties of low income and frequent deployments as part of their family’s service to our country,” David Coleman, the CEO of the College Board, said in a statement. “No single test score should ever be examined without paying attention to this critical context.”

The College Board plans to expand the program to additional pilot schools this fall, then make it more widely available the following year. The dashboard uses College Board data and national data sources to provide neighborhood and high school information like SAT performance, percentage of students eligible for free lunch, average neighborhood family income, housing stability and educational attainment. It does not include information on race.

The initiative, which was first reported by The Wall Street Journal, comes at a time when college entrance exams are under particular scrutiny for not accurately predicting a student’s ability to do well in college, and for privileging those who come from advantageous backgrounds and are able to afford advantages like tutors. Most recently, the college admissions scandal exposed wealthy parents who exploited the tests by facilitating cheating for their children, including the parents of a Northwestern student.

The move by the College Board aims to tackle those concerns, though some said it indirectly addressed problems with a test that is inherently flawed.

“Promotion of ‘adversity scores’ is the latest attempt by the College Board to defend the SAT against increasingly well-documented critiques of the negative consequences of relying on admissions test results,” Robert Schaeffer, public education director of the National Center for Fair and Open Testing, said in a statement. “This latest initiative concedes that the SAT is really a measure of ‘accumulated advantage’ which should not be used without an understanding of a student’s community and family background.”

It remains to be seen whether the initiative will keep the SAT relevant in an environment that’s grown more hostile to it. The CEO of ACT, the College Board’s main competitor, said the program “will not follow the College Board’s example,” though a company spokesperson told the Journal it was “investing significant resources” in a comparable tool.

Some schools, like the University of Chicago, have done away with the ACT and SAT altogether. Northwestern President Morton Schapiro, however, has opposed going test-optional.

“If the test score is the thing that gets you in, then that’s a problem,” Schapiro said in an interview with The Daily in April. “But I don’t see why you don’t look at people’s test scores as long as you evaluate those test scores based on the opportunity of that person to get high test scores.”

“You have to put it in perspective,” he added. “But I’m not a fan of test-optional.”

Standardized test scores are commonly used in college rating schemes like the U.S. News & World Report. Of the 45 percent of Northwestern first-years this year who chose to submit SAT scores, half of them scored between 700 and 760 in reading and writing, while half scored between 730 and 790 in math, according to University data.

On average, racial minorities score lower on standardized tests than their white counterparts, leading critics to denounce the adversity score for ignoring a major determinant of disparities. Data on Northwestern students’ standardized test scores by race is not publicly available.

Many higher education officials echoed Schapiro’s comments, noting that much of the information in the dashboard is already available to them through other parts of a student’s application. The College Board said it saw more “positive” effects at schools that make “holistic” admission decisions, a mantra of Northwestern’s process.

Chief among concerns was the inability of students to view their scores. Student advocates and others said it added problems to a process that already lacks transparency. The College Board also did not say how it calculates the scores.

“It would be helpful to better understand the research behind the scoring system, as there’s no transparency in how it’s being calculated,” Jeff Thomas, a director at Kaplan Test Prep, said in a statement supporting the tool. “To that end, it remains to be seen how admissions officers will evaluate an adversity score relative to the more traditional admissions factors.”

Some also worry the elements of the adversity score could be misinterpreted, and that students wouldn’t be able to correct inaccuracies.

Still, college counselors could find it useful, especially with a greater prospect that the Republican-controlled government could restrict how colleges use race in admissions.

Racial, ethnic and first generation status are among the factors considered for admission to NU, though academic factors like test scores, GPA and rigor of secondary school record are the most important. The University says it adheres to a “need-blind” policy for U.S. citizens and permanent residents, meaning it doesn’t consider income.

It remains unclear, however, how these factors are considered during the application process, and at what stage. While a 2014 document says Northwestern doesn’t use test score cutoffs, for example, the admissions office doesn’t explicitly say so on its website.

Northwestern and other elite schools have in recent years put in greater effort to admit underrepresented and disadvantaged students by considering their structural limitations. “Now we can take more chances on kids who are really outside the box” because Northwestern is selective and attracts top-tier students, President Schapiro said in a March interview with Bloomberg.

Northwestern achieved its goal this fall of admitting a freshman class in which at least 20 percent of students were eligible for the federal Pell Grant, a measure of low-income students.

Still, some students have been pushing the school to accept more from underrepresented groups, and do more to make Northwestern a welcoming place for these students.

“We’re tired of having the same conversation over and over,” Medill sophomore Emma Evans said of the campus climate at a community dialogue earlier this month, “and it’s hard to see the point of conversations like this and task forces when there’s documents of recommendations that are out there.”