The Daily Northwestern • May 21, 2019 • https://dailynorthwestern.com/2019/05/21/campus/northwestern-muslim-cultural-students-association-presents-first-hijab-wearing-supermodel-as-spring-speaker/ 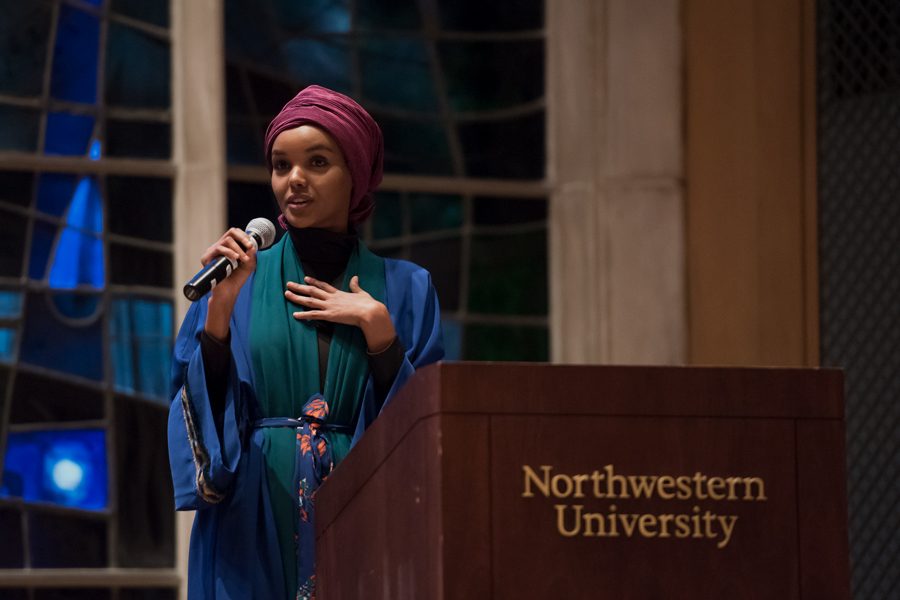 Halima Aden speaks at the Alice Millar Chapel. Aden, who grew up in a Kakuma refugee camp, was the first model to wear a hijab on an international runway.

Muslim activist and Somali-American supermodel Halima Aden recounted the story of how she went from living in a Kenyan refugee camp to walking international runways to becoming the first-ever fashion model to wear the hijab in Sports Illustrated’s Swimsuit Issue. She told her story Monday night at Alice Millar Chapel as the Muslim Cultural Students Association’s spring speaker.

In telling her story, Aden began by describing life in the Kakuma Refugee Camp where she was born.

“War brings out the worst in humanity,” Aden said, as she recounted the story of her mother’s 12-day trek on foot from civil war in Somalia to seek refuge in Kenya, where the camp is located.

Aden recalled her family’s anticipation waiting for the possibility of getting relocated. While the adults prayed to see their family’s names listed among the families who were going to be relocated, she recalled how the children prayed for the opposite, to stay in Kakuma with their friends.

At the age of seven, Aden and her family were on that list. She was anxious to leave and had little idea of what America entailed. She said that when she asked her parents what to expect, they said they didn’t know either, but they were going to find out.

“We won the million-dollar lottery by coming to America,” Aden said, “but millions of kids will never be that lucky.”

After moving to St. Cloud, Minnesota, Aden decided to challenge the conventional definition of “American beauty” and compete in the Miss Minnesota USA Pageant.

She explained this was most likely the moment that launched her career, as she made headlines by wearing a ‘burkini’ — a swimsuit designed to respect Islamic traditions of modest dress — during the swimsuit competition. Just over two years after her pageant debut, Aden was featured in “Sports Illustrated” Swimsuit Issue, wearing two custom burkinis.

Coming from a family that valued education over everything, she noted how even now, her mother cares more about her work at the United Nations Children’s Fund than seeing her on the cover of different magazines.

“That conversation with my mom… if I made it through that I could do anything,” Aden said. “When I told her, ‘Mom, I’m going to give this a try,’ she said, ‘What’s a hijab-wearing model?’ I said, ‘Good question, I don’t know — kind of like America, we’re going to find out.’”

As the talk came to a close, Aden discussed how she found herself positioned at the point where fashion and activism meet.

“The world will meet you where you stand,” Aden said. “Sometimes you have to be first — if not you, then who?”