Warren: What made Saturday an all-time classic 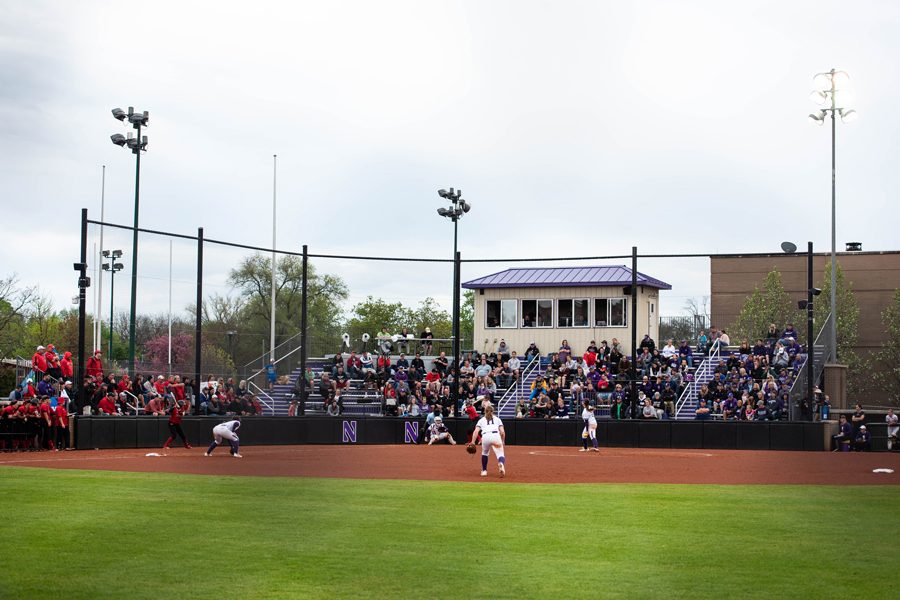 Sharon J. Drysdale Field. “The J” hosted the first regional in Evanston since 2008.

As they were ordering their cold brews from Starbucks or pouring milk into their Froot Loops, supporters had to decide where they would be when the clock struck 1 p.m. — Martin Stadium, Sharon J. Drysdale Field or Miller Park.

Would they go watch the lacrosse team try to power its way to its first Final Four since 2014, the softball team compete in its first home regional since 2008 or the baseball team honor an influential senior class and fight for the final spot in the Big Ten Tournament?

On top of that, the weather was projected to be dandy — a little bit of rain was in the forecast, but a high of 80 degrees, easily the warmest of the young spring, would make the slight, short drizzle tolerable.

The forecaster must have failed his midterm last week.

For the first 82 minutes after 1 p.m., the weather was colder than expected, but good enough for a Midwest Saturday in May.

Each game had just reached a critical moment. On the Lakefill, Syracuse had just cut its deficit to five goals. At “the J,” Morgan Nelson was about to hit to start the bottom of the fifth. And right adjacent to that, Minnesota’s Jordan Kozicky had just hit a home run to take a 4-3 advantage.

None of those moments initiated the change. In fact, the real reason is only a footnote in the box score. When the clock showed all “2s,” play stopped at all three events due to a lightning delay.

What followed was chaos.

After a few minutes, the rain started, and did not relent. Fans, players and coaches deserted the premises of all three fields. Within half an hour, stands were empty. Dugouts were vacant. The stadiums were ghost towns.

The baseball team was huddled in its clubhouse, watching two other conference games that would make its current game against the Golden Gophers into a win-and-in contest. The lacrosse team gathered in its locker room, trying to stay even keel while waiting to return to the field. The softball team also waited indoors for the weather to pass. Southern Illinois’ softball team, set to play after the Wildcats and Louisville, left the complex.

At Miller Park, the umpires, coaches for both teams and a member of the NU athletic department had discussed contingency plans if the rain continued late into the night. Miller Park has no lights. If the rain did not stop, the game — and the Cats’ season — may have been over in the crack of a thunderbolt.

Sharon J. Drysdale Field has lights, so NU and Louisville’s game would start once the clouds opened. But there were two other games to be played, and they were going to happen, whether they started at 6 p.m., 9 p.m. or midnight.

Earlier in the season, the lacrosse team played a regular season game against Maryland that had been pushed inside Ryan Fieldhouse due to lightning. The two teams were tied at 12, but the Terrapins dominated the time inside, and won 17-13. After that experience, the Cats probably did not want a repeat of last time.

Then a little after 4 p.m., a breakthrough came. The lacrosse team went back outside, despite the rain, and began to warm up. It was announced the game would resume at 4:20 p.m.

Soon after, the rain halted and the baseball and softball players started returning to the field. The baseball game would start at 5:20 p.m., and the softball contest 10 minutes after that.

NU sports teams have had weather delays before, even in championship games. But to have three games of the utmost importance all occur in Evanston and all postponed at the exact same moment — that’s unique. That’s remarkable. That’s noteworthy.

I’m sure everyone who woke up Saturday morning would have preferred blue skies and warm temperatures to watch the games. But the weather provided a wrinkle that transformed May 18 from an exciting day for Cats sports into an all-timer.

Even if none of it will show up in the stats.