The Daily Northwestern • May 20, 2019 • https://dailynorthwestern.com/2019/05/20/campus/youtubers-cantomando-discuss-asian-canadian-experience-in-media-industry/ 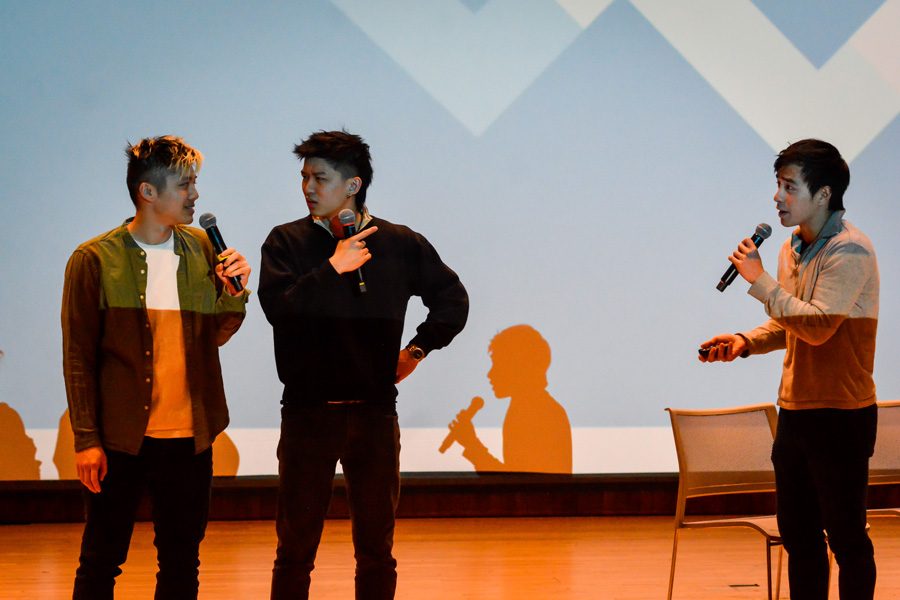 Members of the popular YouTube channel CantoMando speak in McCormick Auditorium. They shared their experiences as Asian Canadians in the media industry during CSA’s speaker series.

Members of the popular YouTube channel CantoMando shared their experiences as Asian Canadians in the media industry at a Northwestern Chinese Students Association event Sunday afternoon.

CantoMando consists of three Asian Canadians: Sheldon Ho, Mike Wu and Edward Leung. The channel has over 154,000 subscribers, as of this past Sunday. Their comedic skits, which range from making DIY bubble tea to Asian parents’ reactions to memes, represent their experiences as second-generation Asian Canadians.

Matthew You, an executive board member of the organization, said the group hopes that their events reach beyond CSA members to the greater Northwestern community.

“CSA events are aimed at fostering Chinese-American community on campus, but some events are open to the public, which allows the public to better understand our culture,” the Bienen and Weinberg first-year said.

About 70 people attended the event, hosted in McCormick Auditorium in Norris University Center, including students from the greater Chicagoland area.

CantoMando performed a skit portraying the struggles they initially faced as YouTubers.

Ho, the founder of CantoMando, elaborated on the group’s struggles and explained how they ultimately decided to prioritize their YouTube channel over their jobs. He said he and other members of CantoMando quit their jobs and faced varying degrees of backlash from their parents.

“We don’t know where we’ll be, we don’t know whether we’ll succeed, we don’t know if our parents will stop worrying for us,” Ho said. “But we do know that there is an opportunity for us right now, and we have to lay it all on the line, and that we won’t have any regrets doing it.”

During the event, the members of CantoMando also participated in a moderated Q&A session and answered questions from the audience.

Wu, who joined the group shortly after Ho, realized early on that they would face hardships in their rise to YouTube stardom.

“This is something that we loved to do,” Wu said. “We loved to make videos. However, you start to see your friends going out and you realize there’s really only one person watching our videos, and it’s probably Sheldon.”

Wu said that the group is always learning how to better curate their creative content and connect with their audience.

When asked how the trio finds inspiration for their videos, Leung said he is often influenced by talking to his mom, emphasizing CantoMando’s desire to provide relatable Asian Canadian humor in their videos.

The group gave the audience advice to take away from their own experiences, but also provided a note of caution to those hoping to follow in their footsteps.

“If the risk says take it, then take it, but don’t come back to me,” Leung said.