Lacrosse: Kelly Amonte Hiller has Northwestern back in the Final Four 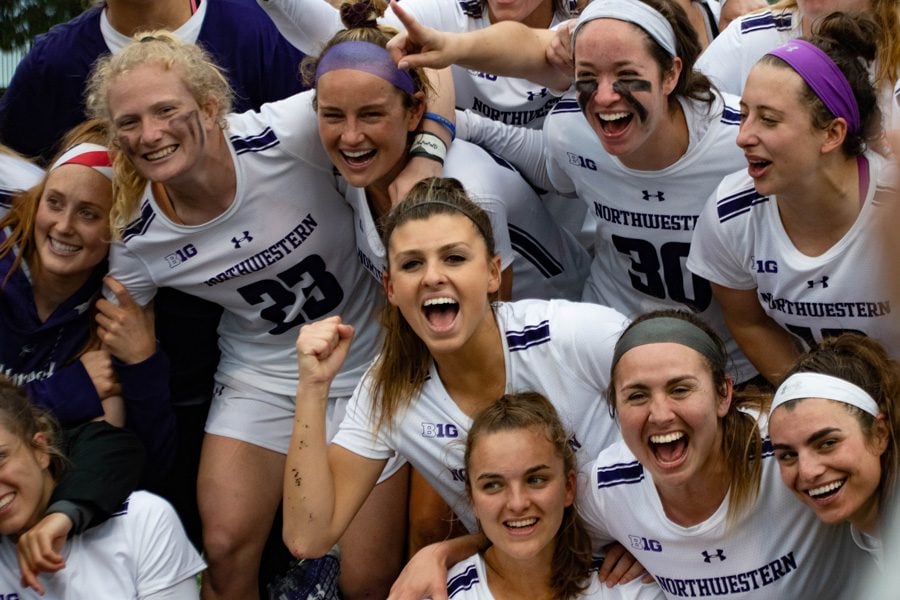 The Wildcats celebrate their 18-14 win over Syracuse on Saturday. NU advanced to the Final Four for the first time since 2014.

After the final horn sounded in Saturday’s NCAA quarterfinal and Northwestern clinched a spot in the Final Four for the first time since 2014, there were two celebrations.

On the field, the Wildcat players threw their sticks in the air and sprinted down the field before huddling in front of their net. Then on the sideline, coach Kelly Amonte Hiller hugged all of the coaches before finding athletic director Jim Phillips.

She told him two things: it felt good to be back and the Cats were not done yet.

“It’s been a grind to get us back to the level that she has set,” Phillips told the Daily. “Lacrosse at Northwestern is Kelly Amonte Hiller, and the seven national championships that we have are because of her. We’ve been really looking forward to this day of getting back where we belong.”

No. 4 NU (16-4, 5-1 Big Ten) led the entire way in a 18-14 win over No. 5 Syracuse (16-5, 5-2 ACC) and was up by two or more goals for all of the second half. The Orange keyed their defense on senior Selena Lasota, who was unanimously named Big Ten Attacker of the Year. While Lasota struggled to get open and scored only three times, seven players scored multiple goals, including a season-high three from junior midfielder Megan Kinna.

Kinna started every game this season, but had only scored two goals in the Cats’ five prior games this season against the current top-5 teams. Amonte Hiller said she especially worked with Kinna on her shooting this past week, anticipating pressure on Lasota and freshman attacker Izzy Scane.

Kinna responded with the best game and the biggest goal of her career. With just over seven minutes left, she scored off an unassisted shot to extend the Cats’ lead to three and put the game away.

But Kinna wasn’t the only NU player who broke out in the Elite Eight. Freshman midfielder Elle Hansen hasn’t started a game all season or scored since Feb. 25. Amonte Hiller said she trusted Hansen to play Saturday because her offense had really picked up recently in practice.

Hansen rewarded her coach’s trust by scoring twice against the Orange and doubling her career goal total.

“They have such a depth of talent where really anyone can step up in any moment,” Amonte Hiller said of her players. “When you have that, it gives each of them confidence.”

The Cats will face No. 1 Maryland in Baltimore on Friday, less than three weeks removed from a 16-11 upset win over the Terrapins on the same field in the Big Ten Tournament championship game.

The winner will face No. 2 Boston College or No. 3 UNC in the championship game Sunday, potentially setting up a rematch of last year’s Elite Eight meeting between the Tar Heels and NU. That 19-14 loss to UNC almost exactly a year ago was on the team’s mind Saturday, Lasota said, as this year’s Cats team proved that it belongs among the top teams in the NCAA.

“Making the Final Four is a very hard task,” she said. “Showing up every day and competing at the level you want to compete at is hard to do. But this team has it in them, and this is the result of that.”