The Daily Northwestern • May 19, 2019 • https://dailynorthwestern.com/2019/05/19/lateststories/womens-golf-wildcats-sit-in-eighth-place-after-second-round-of-ncaa-championships/

Women’s Golf: Wildcats sit in eighth place after second round of NCAA Championships 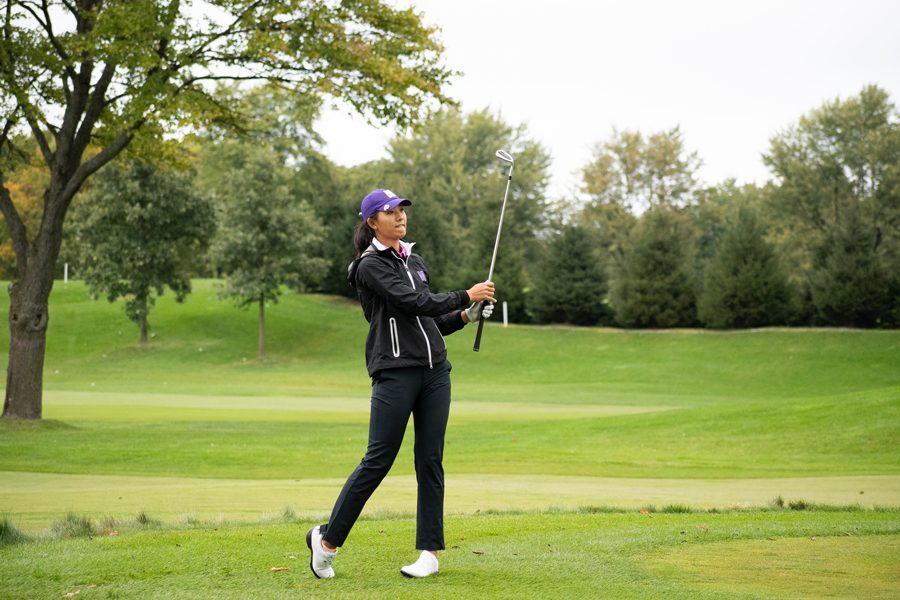 Kelly Su watches her shot. The freshman shot a team-best 1-under in the second round of the NCAA Championships on Sunday.

After a shaky first round and a suspension of play all day Saturday due to inclement weather, Northwestern responded with a 2-over-par team performance in the second round of the NCAA Championships on Sunday. The Wildcats now sit in eighth place overall, in prime position to advance to the match play portion of the tournament for the third consecutive year.

The stoppage of Saturday’s action forced the tournament’s stroke play portion to be shortened from 72 holes to 54 holes, meaning that all 24 participating teams will play again in Monday’s third round before the field is cut to eight teams for Tuesday’s match play.

NU opened the tournament Friday with a 21-over showing that placed it in 11th place after the first round. Senior and Big Ten Golfer of the Year Stephanie Lau had the Cats’ best performance of the day, shooting 3-over. She posted three birdies and finished round one tied for 19th place.

Play was suspended before NU could even begin its second round Saturday. But the Cats came out strong when it resumed Sunday morning. Freshman Kelly Su led with a team-best 1-under — the second time this season she’s shot a under par for a round.

Su began with a birdie, but then followed it with back-to-back bogeys on the next two holes. The freshman added one more birdie and finished the front nine even.
Fellow rookie Kelly Sim rebounded from a double bogey on the second hole to hit four birdies in a row and finish the front nine 1-under.

On the back nine, senior Janet Mao and junior Brooke Riley each had strong performances that pushed the Cats into the top-10 on the leaderboard. Mao shot three birdies and an eagle on the last nine holes, while Riley added three birdies of her own. Both finished at 1-over for the round.

NU will play its final round Monday. The Cats, with a cumulative score of 23-over, are trailed by Auburn and Wake Forest, who both hold scores of 24-over. The tournament leader, Duke, shot a remarkable 11-under in the second round and holds a nine-stroke lead.