The Daily Northwestern • May 17, 2019 • https://dailynorthwestern.com/2019/05/17/sports/lacrosse-no-4-northwestern-readies-for-quarterfinal-rematch-with-no-5-syracuse/

Lacrosse: No. 4 Northwestern readies for quarterfinal rematch with No. 5 Syracuse 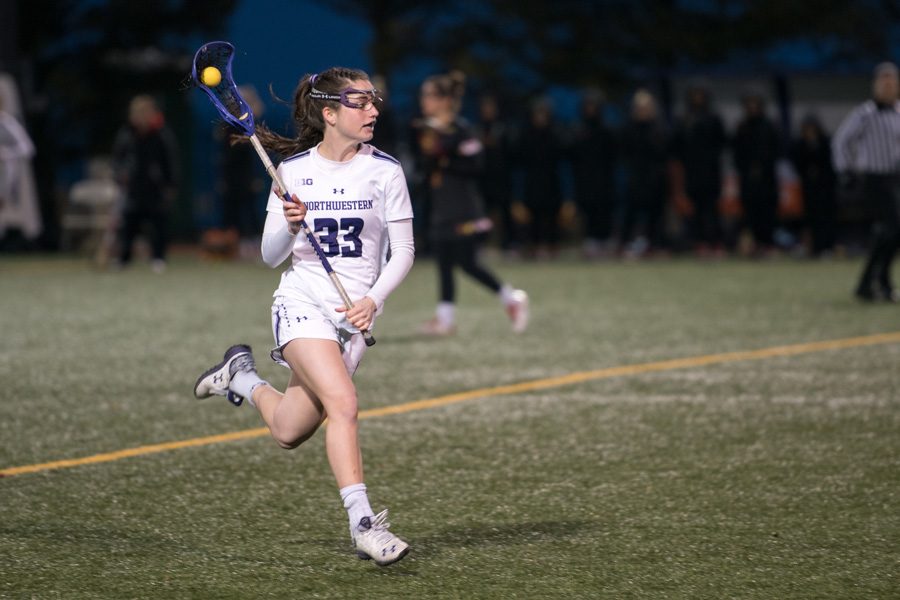 Brennan Dwyer drives the ball down the field. The sophomore won a game-high 8 draw controls when NU and Syracuse met in February.

In late February, then-No. 5 Northwestern traveled to upstate New York to face No. 7 Syracuse. The Wildcats entered the game on a roll — in their previous three games, they’d scored a total 63 goals — but with the help of a late-game comeback and an overtime game-winner, the Orange brought that hot streak to a stop. Syracuse won 15-14, and NU went on to drop two of its next three games.

Nearly three months later, the Cats and the Orange are set to face off again — this time, with both teams much improved, coach Kelly Amonte Hiller said, and with the stakes much higher.

No. 4 NU (15-4) and No. 5 Syracuse (16-4) will meet Saturday at Martin Stadium in the NCAA Tournament quarterfinals, with a trip to the Final Four on the line. The Cats, fresh off Sunday’s second-round 13-10 win over Notre Dame, are looking to make their first appearance in the national semifinals since 2014, while the Orange’s most recent visit to the semifinals came in 2016.

“They’re definitely a very aggressive and a very talented team,” said sophomore midfielder Brennan Dwyer. “It’s two teams who obviously have made it this far and are both really good, so we’re going to have to really focus on what our coaches are telling us and trust what they have in mind and follow their plan.”

Ahead of this Saturday’s quarterfinal, Amonte Hiller emphasized how NU is a different — and a better — team than it was when it lost to the Orange in February.

“We’ve improved on every aspect of the game,” Amonte Hiller said, noting how Dwyer has developed into one of the top draw-control specialists in the country and that freshman Izzy Scane — now NU’s second-leading scorer — was playing defense, not attack, in February. “You can take a few things from the first game, but the most important thing now is you have two hungry teams coming at each other and it’s really whoever has the most will (who) is going to be the one that comes out on top.”

Syracuse doesn’t crack the top 10 in most statistical categories — at 14.05 goals a game, its offense is ranked 22nd in the country, while its defense is 24th overall, allowing around 10 scores — but its resume stood out enough to earn the Orange a top-five seed in the tournament. They beat seven ranked teams playing in the country’s top conference this season, and have dropped only four games.

Three of those four losses, though, came to No. 1 Maryland and No. 2 Boston College, and in all three, Syracuse only lost by one goal.

Attacker Emily Hawryschuk leads the Orange with 70 goals on the season — 36 more than any other player on the team — but they do average around 7 assists per game. Syracuse’s defense will also pose a challenge: The Orange play a zone, a style the Cats haven’t faced much this season.

To beat it, they’ll have to focus on finding cutters and moving the ball around to find openings. Against Towson’s zone defense in the second round of the NCAA Tournament last year, the Cats put up one of their best offensive performances of the season.

They’ll hope they can do that again this season on Saturday, especially with a home-field advantage in the first quarterfinal game played in Evanston since 2013. Even with the biggest prize growing within reach, though, NU is still taking it one game at a time.

“Against Notre Dame (in the second round) we came out really, really strong, but then we lost our core values … I don’t think we played for a full 60 minutes,” said senior attacker Selena Lasota. “We’re very capable of playing for a full 60 minutes, so that’s definitely something we’ve been working on and talking about.”