The Daily Northwestern • May 17, 2019 • https://dailynorthwestern.com/2019/05/17/campus/former-u-s-ambassador-to-russia-michael-mcfaul-says-u-s-and-russia-are-not-natural-enemies/ 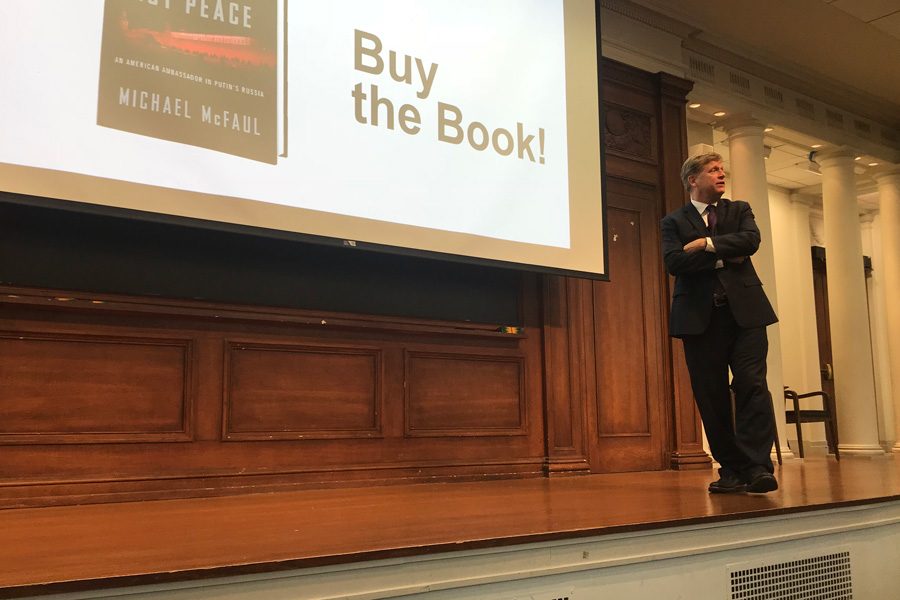 Michael McFaul spoke in Harris Hall Thursday about U.S.-Russia relations and present tensions. He said Putin’s zero-sum view of the U.S. is a major obstacle to improved relations.

McFaul spoke of the past, present and future of U.S.-Russia relations Thursday, as part of the NU Political Science department’s annual Weber Lecture speaker series. Heworked within the Obama administration for five years. He served as special assistant to the President and senior director for Russian and Eurasian Affairs from 2009 to 2012, and was later nominated as U.S. ambassador to Russia, serving in the position for two years.

Currently, the Stanford University Political Science professor works as director and fellow of its Institute for International Studies. He has appeared on NBC as an analyst and written columns for the Washington Post. He has also written several books, including his most recent piece, “From Cold War to Hot Peace: An American Ambassador to Putin’s Russia.”

McFaul said the book, although written as a history of U.S.-Russian relations, is also supplemented by much of his own history.

McFaul’s interest in Russia began in high school. Amid the heightened tensions between the U.S. and Russia during the Cold War, he remembered becoming intensely fearful of what he felt was an imminent possibility of complete global destruction due to the global political climate.

It was during this time, McFaul said, that he developed the theory that would influence much of his work within the White House and beyond.

“The idea was a simple one,” McFaul said. “If we could just get to know the Soviets better, we might be able to reduce tensions between our two countries.”

In an effort to test his hypothesis, the former ambassador said he began to take Russian language and international relations courses as an undergraduate at Stanford. He studied abroad in Russia during his sophomore year, aspiring to meet the Russian people who were harshly represented by President Reagan’s rhetoric at the time.

Through this trip, and later experience gained working and collaborating with Russians officials, McFaul was able to discover truth supporting his high school theory.

“We are not destined to be in tension with Russia,” McFaul concluded. “This is not about culture.”

In fact, McFaul believes today’s tension-filled relationship is not due to many commonly referenced issues such as the Iraq War or NATO expansion. It is not about Russia’s growing international power, or a negative Russian public opinion of the U.S.

Rather, McFaul says today’s climate is largely due to President Putin himself.

“Putin is fighting an ideological war,” McFaul said. “He thinks America, and the liberal world order we created, is out to destroy Russia. In the early days he was pushing back, and now he is going on the offensive to propogate what he calls ‘conservative Orthodox family values against the decadent liberal West.’”

Before Putin’s second term as president, McFaul said, U.S.-Russia relations had significantly improved. McFaul worked with President Obama to help orchestrate the 2009 “reset.” It was a period of cooperation, he said, that resulted in many positive outcomes for the two countries. Through the pursuance of “win-win,” outcomes, they were able to cooperate on the New START Treaty, a nuclear arms reduction initiative, among other positive agreements.

In contrast, McFaul said Putin can view the U.S. as a competitor one day, and an enemy the next. As long as Putin is in power, he said, U.S.-Russia relations will remain confrontational.

Weinberg senior Carina Kaplan said McFaul’s analysis of international issues seemed to be the opposite of Putin’s views.

“I liked that he took a nuanced way of looking at these conflicts,” Kaplan said. “It wasn’t a zero-sum view, or an argument of a binary situation that can’t be fixed.”

McFaul gave the over 80 audience members a peek into his more interesting experiences as ambassador to Russia. He recalled one instance during his residence at the Spaso House, the home for U.S. ambassadors in Moscow, where he was told to assume that Russian authorities may be wiretapping his conversations in every room.

Weinberg first-year Ruby Scanlon said she was surprised by the depth of knowledge and experience he provided about the issue.

“It is not custom for politicians to share openly about their experiences working with other officials,” the Weinberg freshman said. “I was happy that I got to hear the perspective of a high-up official working so close to these issues.”