The Daily Northwestern • May 16, 2019 • https://dailynorthwestern.com/2019/05/16/sports/womens-golf-northwestern-prepares-for-ncaa-championships/ 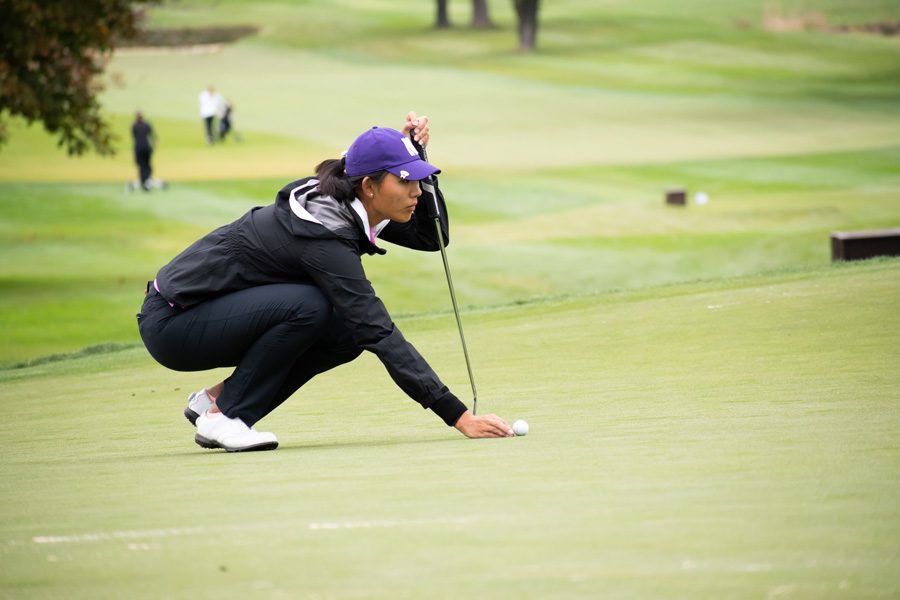 Kelly Su lines up a put. The freshman is one of five golfers who will represent the Wildcats in this weekend’s NCAA Championships.

This weekend, Northwestern will participate in the NCAA Championships, hosted by the Blessings Golf Club in Fayetteville, Arkansas. The private course opened in 2004 and was funded by Tyson Foods, the world’s second largest provider of chicken, beef and pork.

This weekend, the Wildcats will be the ones trying to bring home the bacon.

Heading to the NCAA Championships for the fifth consecutive season, No. 16 NU is one of 24 teams that qualified for the five-day event. All 24 teams will play three rounds this weekend, then the top 15 performing teams will advance to Sunday. Following that round, seven more teams will be cut from the field, and finally, the top eight teams will compete in match play in a one-on-one format.

Last season, the Cats were eliminated in match play after advancing as one of the top eight performing teams in the field. The year before that, in 2017, NU advanced to the national championship match and was named runner-up.

The Cats had a strong start to their postseason last week, finishing third in their West Regional. Junior Brooke Riley set a course record, shooting a seven-under, 65, in the final day of the tournament and securing NU a spot in the championship.

But the Cats have performed better in warm weather environments all season, and the Arkansas climate will be on their side this weekend. Temperatures will reach the 90s every day this week, but there isn’t expected to be rain or heavy winds. In similar conditions at the Silverado Showdown in Napa, California played in February, the Cats finished first ahead of USC.

NU will trot out the same lineup it used in the regional round and the Big Ten Tournament, featuring Riley, Stephanie Lau, Janet Mao, Kelly Sim and Kelly Su. Three of those players were around for the championship last year, making the Cats one of the more experienced teams in the field.