The Daily Northwestern • May 16, 2019 • https://dailynorthwestern.com/2019/05/16/sports/mens-golf-wildcats-finish-season-just-short-of-ncaa-championships/ 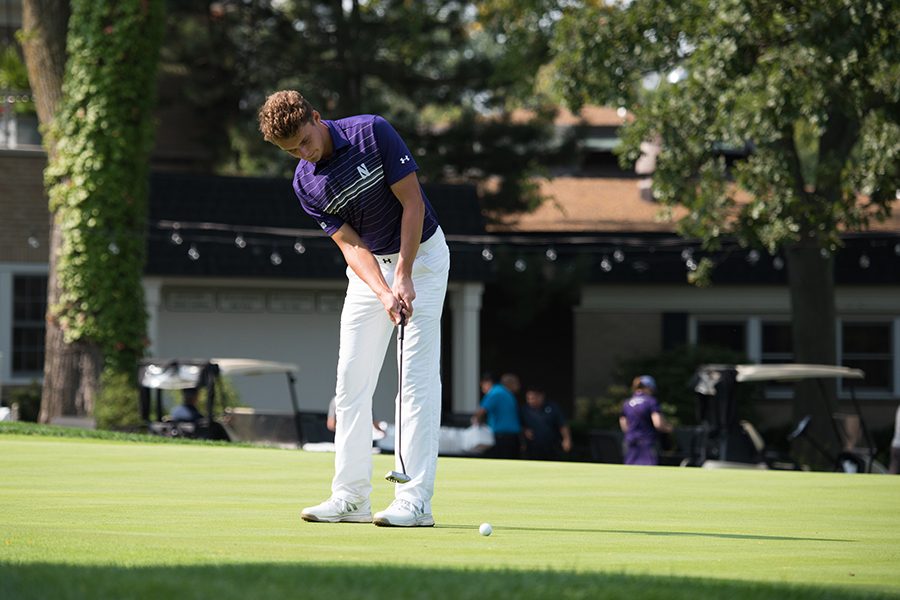 Northwestern’s season came to a close Wednesday as the Wildcats finished eighth in the NCAA Myrtle Beach Regional, placing eight strokes behind UNLV, the last team to qualify.

After shooting 14-over par on the tournament’s first nine holes, NU rebounded but could never fully recover to bounce back into the top five — ultimately finishing at even-par, while champion Illinois finished 25-under.

“We’ll live to rue the opening nine holes,” coach David Inglis said. “It was almost a reflection of the season really. We’ve played some good events, had some good rounds… but we couldn’t quite seem to put it all together at the right time.”

Through most of the tournament, the Cats played like they had nothing to lose, Inglis said. But he added reaching that mindset “just took a little too long” on Monday as three of the team’s five golfers finished 5-under or worse.

On the tournament’s second day, NU’s 284-stroke total, led by freshman Lucas Becht at 4-under, was among the top four team scores on the day.

Becht’s team-high six birdies on Day Two complemented freshman David Nyfjäll’s 3-under performance to bring the team to ninth place, up one spot in standings.

Despite no golfer shooting over-par on Wednesday — and the team coming as close as three shots back from cracking the top five — the showing wasn’t enough to push the Cats into the top five. Still, Inglis said he was pleased with how the team after rebounded after a disappointing showing at Big Ten Championships last month.

“If we close coming down the back nine… that would have been a hell of a story,” Inglis said. “But I’m still just so proud of those guys.”

NU was led once again by Nyfjäll, who opened the tournament one-over on Monday, before going 3-under on the tournament’s second day. He closed out Wednesday one-under — along with Becht, junior Everton Hawkins and senior Ryan Lumsden — to finish tied for 12th individually.

The Big Ten Freshman of the Year shot 5-under overall on Par 4’s, making him the third-best golfer on those holes over the tournament’s three days.

With his NCAA Regional performance to close out the season, Nyfjäll passed Luke Donald to take the best first-year stroke average in program history — and the best single-season average at 71.72.

After struggling during the Big Ten Championships, Lumsden turned around to lead the team on Monday at 2-under and join Nyfjäll as one of the three golfers at 1-under on Wednesday.

“That was great to see Ryan back to being more like Ryan Lumsden,” Inglis said. “He showed up that first day when the team struggled and played a good round to keep us in it.”

The Byron Nelson Award winner now holds the third-best career stroke average in program history, behind Dylan Wu and Luke Donald — and Inglis had nothing but positive things to say about the Scottish international.

“He’ll tell you he was disappointed with how he performed this spring, but you have to look beyond that,” Inglis said. “He’s leaving Northwestern as one of the best players in our history, and he’ll be sorely missed.”