The Daily Northwestern • May 16, 2019 • https://dailynorthwestern.com/2019/05/16/city/affordable-housing-plan-steering-committee-considers-smaller-developments-to-integrate-housing/ 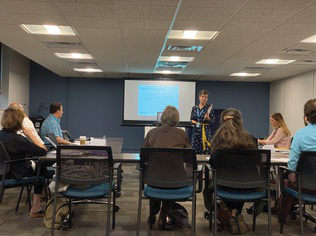 Housing and grants manager Sarah Flax gave a presentation on the changes needed to allow for smaller developments and ADUs. She said one way to allow for such developments is eliminating single-family zoning, which Minneapolis’ City Council did last December. Flax said the policy is “really just low-density zoning,” as opposed to eliminating single family homes. She described the policy as “adding density to single-family neighborhoods.”

Flax said such policies could help integrate affordable housing in different communities within the city.

“When you look at how much of our city is zoned R1 and R2, that’s a lot of land and a lot of lots,” Flax said. The policy “helps integrate affordable housing units in some of our highest-cost housing areas because large lots, single-family neighborhoods tend to be expensive.”

Flax also suggested using ADUs to address affordable housing needs and integrate inexpensive units into other neighborhoods. ADUs can take on the form of housing in any way — functioning as a basement apartment to a tiny house in a regular home’s backyard.

Flax said ADUs could be used to diversify and expand the city’s housing stock, making more efficient use of existing developments through subdividing them.

“A lot of our houses were built for larger families,” Flax said. “Our housing doesn’t necessarily meet the needs of our households. So how can we look at existing housing stock and maybe modify it?”

While Flax said the goal of ADUs are to put small, modest homes on the housing market, community member Tina Payton questioned whether they would really be used as affordable units.

“If you’re a homeowner, you recently got your assessment for next year,” Payton said. “And it’s really high. If you have a home that has an accessory dwelling unit, it’s a large home. Are they really going to be able to afford to rent to an affordable person?”

Minneapolis City Council voted to get rid of single-family zoning classifications, and instead allowing residential structures of up to three dwelling units on the basis that it has historically perpetuated segregation and racist housing practices.

“They’re pointing out that when you allow less expensive units where more people can move into different neighborhoods, you create opportunities for people, you start chipping away at [the idea] that your zip code determines your outcome, your income, your success,” Flax said.