The Daily Northwestern • May 16, 2019 • https://dailynorthwestern.com/2019/05/16/campus/blockchain-startup-headed-by-northwestern-and-cornell-professors-exceeds-10-million-in-investments/ 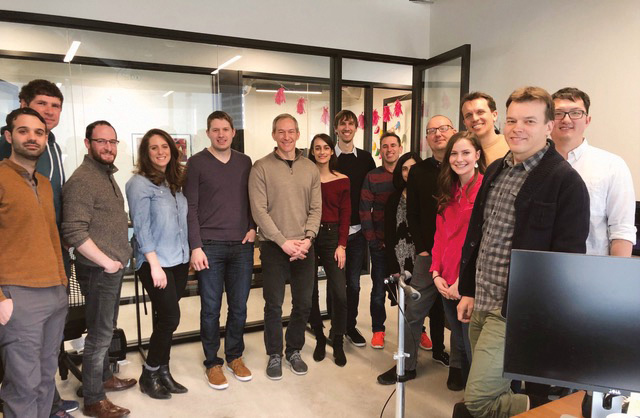 The bloXroute team in Chicago. The startup has expanded to three locations in Chicago, Ithaca, and Tel Aviv.

A blockchain solution startup co-founded by Northwestern and Cornell University networking experts announced May 9 that the company has exceeded $10 million in investments.

The latest round of funding for bloXroute, a blockchain scalability solution that aims to solve networking problems in the current blockchain ecosystem, came from leading venture capital hubs around the world, such as Pantera Capital, Coinbase Ventures and Fenbushi Capital.

The company works on solving the scalability “bottleneck,” a term the company uses to describe the limits in processing cryptocurrencies and blockchain. To achieve this, bloXroute maximizes the transaction volume of a given blockchain by a thousand-fold increase.

The company essentially created a network that propagates information more quickly and smoothly to make the world of blockchain work “better and faster,” said Computer Science Prof. Aleksandar Kuzmanovic, a co-founder of the company.

Kuzmanovic said the company idea originated from blockchain research he was doing with former doctoral. student Uri Klarman. The NU professor and student found that the blockchain network could benefit from a more optimized solution, prompting them to reach out to Cornell Prof. Emin Gün Sirer and Cornell Ph.D. candidate Soumya Basu, another co-founder, about a startup that applies his research in a real-world context.

“I am an entrepreneurial character,” Kuzmanovic said. “I always wanted to make things actually work in the real world, so this is really a dream come true for me.”

Basu said through bloXroute, his first and only startup experience, he found that research and real world application are two different processes and present different challenges.

“There’s the trouble of finding the right people, convincing them to join your company and getting them to invest in the right vision,” Basu said.

Robert Belson, a Weinberg senior and the only undergraduate student on bloXroute’s team of 25, said he was was approached by Kuzmanovic, his former professor, in the early stages of the company.

Belson said he was anticipating a busy Fall Quarter and knew that joining a startup would only add to his already heavy workload.

“Recognizing it was probably not a good idea, I said ‘Absolutely!'” Belson said. “How can I not take advantage of this opportunity?”

Since its founding in 2017, the team has grown considerably and expanded to three offices in Chicago, Ithaca and Tel Aviv, Belson said. Software developers at all three sites travel and work closely with each other.

Basu and Kuzmanovic said they see a lot of promise in the future of cryptocurrency and bloXroute’s role in it.

By building clearer and more intentional architectural designs, bloXroute can layer a more organized network beneath the chaos of blockchain, Basu said.

“A lot of things are being done in an ad hoc way,” Basu said. “People are coding in their own ways and doing thing from their guts. bloXroute looks at the network and says ‘alright, if we were to do this properly, what does that look like?'”