The Daily Northwestern • May 14, 2019 • https://dailynorthwestern.com/2019/05/14/sports/baseball-northwestern-rests-starters-in-loss-to-notre-dame/ 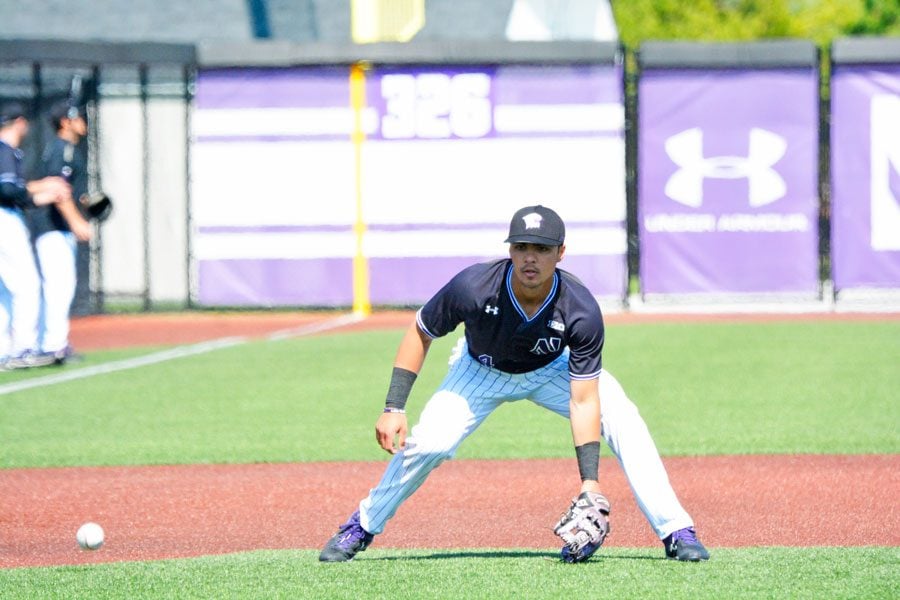 Alex Erro fields a ground ball. The Wildcats fell to Notre Dame in their final nonconference game of the season Tuesday.

It may have only been Tuesday, but Northwestern was looking forward to the weekend.

With a season-defining series against Minnesota starting Thursday, the Wildcats took a cautious approach to the home contest against Notre Dame, utilizing multiple pitchers and substituting out key starters early in the game.

“Obviously not the outcome we were looking for, but we were trying to rest most of the starters as much as we could and just make sure for the weekend,” junior infielder Charlie Maxwell said. “We are not too bummed about it. We have bigger things in mind.”

Three days after starting the second half of Saturday’s twin bill against Rutgers, freshman southpaw Parker Hanks again got the start for NU.

Hanks struggled in his one inning of work. He allowed the first three batters of the game to reach base to give the Notre Dame a bases-loaded opportunity with no outs. Hanks managed to force Daniel Jung into a sacrifice fly to center field, but the next batter, Eric Gilgenbach, slashed a triple into left-center to score the other two runners and make the score 3-0. Gilgenbach later scored on a Zack Prajzner single.

Replacing Hanks for the top of the second was junior right-hander Nick Cauley — who made his first on-field appearance in two months. Cauley got the first two outs of the inning before giving up back-to-back homers to Niko Kavadas and Jack Zyska.

The Cats almost reversed their fortune with a big fifth inning. Freshman designated hitter Michael Trautwein worked a leadoff walk and then stole second base. Three straight hits from juniors Leo Kaplan, Maxwell and Alex Erro scored Trautwein and then Kaplan while putting Maxwell and Erro in scoring position. After a groundout, freshman first baseman Anthony Calarco walked to juice the bases, and then senior right fielder Ben Dickey walked to force in a run.

Following another out, freshman center fielder David Dunn stepped up to the plate. After falling behind 1-2, the Fighting Irish’s head coach, Mik Aoki, elected to make a pitching change, subbing in Tommy Vail for Evan Tenuta. Vail induced a grounder to third but Kavadas made an error, allowing Erro to score and make the score 6-4.

But Notre Dame again responded, this time with back-to-back three-run innings against sophomore righty Anthony Alepra and junior lefty Sam Lawrence. The extra insurance pushed the contest from a close game to a blowout.

NU went with the “staff day” strategy for the game, using eight pitchers with only one throwing more than an inning.

“Sometimes it’s tough when you go a staff day,” Dickey said. “We will get back to good baseball this weekend.”

In addition to the bullpenning, coach Spencer Allen also made some defensive changes in order to give some stalwarts some rest to prepare for the weekend. Senior shortstop Jack Dunn — who has started every game since he stepped on campus — was taken out before the fourth inning and senior first baseman Willie Bourbon lasted one more inning before seeing his day end.

Allen said the move to take out the two mainstays was planned.

“We got to be healthy and got to win a game against the Gophers so that’s the key,” Allen said. “They were coming out regardless of the score.”