The Daily Northwestern • May 14, 2019 • https://dailynorthwestern.com/2019/05/14/lateststories/journalists-discuss-how-to-cover-refugees-asylum-seekers/ 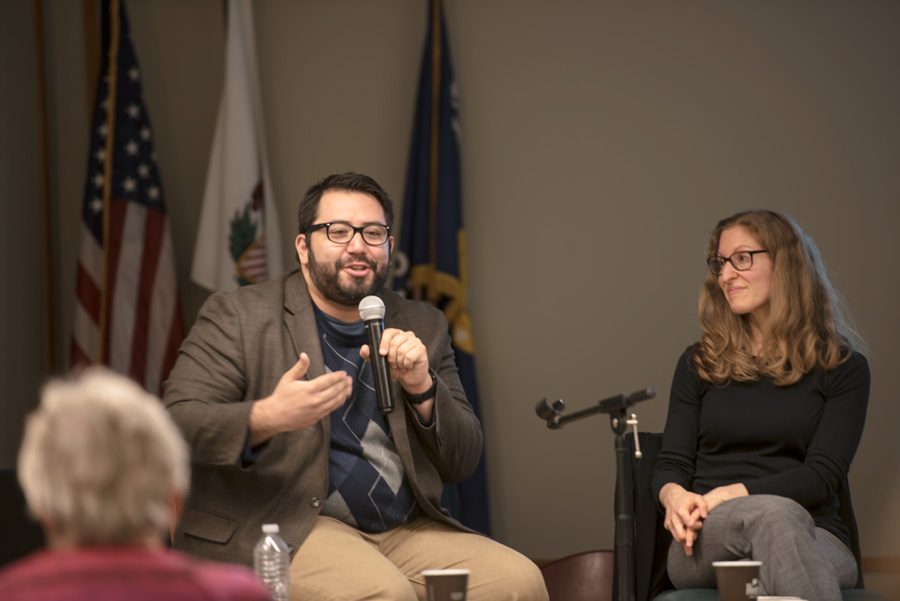 In recent years, refugees and immigrants have been highly covered communities by the media — from detention centers near the border to President Donald Trump’s so-called “Muslim ban,” there has been no shortage of policy updates and panels about the government’s treatment of those seeking entry to the United States.

Journalist Alex V. Hernandez, of Block Club Chicago, and Political Science Prof. Wendy Pearlman discussed telling the stories of refugee and asylum seekers during their panel at Evanston Public Library on Monday night. The event was sponsored by the Northwestern Middle East and North African Studies Program and 90 Days, 90 Voices. The panelists said media should be more focused on telling the stories of the people these abstract policies affect.

Pearlman wrote the book “We Crossed a Bridge and It Trembled,” a collection of interviews with Syrians across Europe, the U.S. and the Middle East over several years. She pointed out that the term “refugee” has been used as a categorization or type of person, rather than a description of a situation or moment in someone’s life. The Syrians Pearlman interviewed in 2012, for instance, did not consider themselves to be refugees at first.

“Their sense of themselves as identifying as refugees has been a process,” Pearlman said during the event. “It didn’t begin when they cross the border. The words we use sometimes reify things into these concrete bounded categories, and they don’t capture the fluidity of a nuance of the human experience. I think our type of work tries to bring back this human element into it all.”

Hernandez is engagement director for 90 Days, 90 Voices, a news outlet attempting to recapture that human element of immigration storytelling. The project began within two weeks of Trump’s ban, Pearlman said. According to its website, their goal is to “educate the public about those seeking a home in the United States” through personal narratives and reporting.

A lot of nuance goes into reporting such individual and potentially traumatic stories — both journalists stressed the importance of safeguarding the identities of sources. In addition, they noted the time it has taken for them to get to know their sources through mutual connections and careful interviewing. Pearlman has learned Arabic through travel, classes and homestays, while Hernandez said he speaks “second-generation” Spanish. Their experiences have allowed them to connect with their sources through language and pick up on contextual and cultural clues.

Hernandez compared some of the story documenting he has done to the work of journalist and radio host Studs Terkel, who was famous for his interviewee-driven stories. This style is different from the journalism he might do for Block Club Chicago, he said, where he focuses on accountability reporting. Those interviews are with “media-literate” people like aldermen or police commanders, who are already familiar with reporters. In comparison, the sources he documents with 90 Days, 90 Voices come from “a community that feels targeted right now.”

“I’m maybe the first time they’ve talked to a reporter,” Hernandez said during the event. “I’m kind of holding their hand through the process.”

Evanston resident Tamar Frolichstein-Appel works at an organization called Upwardly Global, which helps refugees and immigrants get jobs in the United States. She heard about the event on Facebook and said she wanted to learn more about the 90 Days, 90 Voices project.

“I know firsthand the power of the experience,” Frolichstein-Appel said, “about… the emotional toll and material toll of not being able to work in your profession, and it was all very resonant. The full humanity of immigrants and refugees, I think that that can be really lost, as well as the powers of people telling their own stories.”