The Daily Northwestern • May 12, 2019 • https://dailynorthwestern.com/2019/05/12/sports/softball-wildcats-fall-in-semifinals-of-big-ten-tournament-but-will-host-ncaa-regional/ 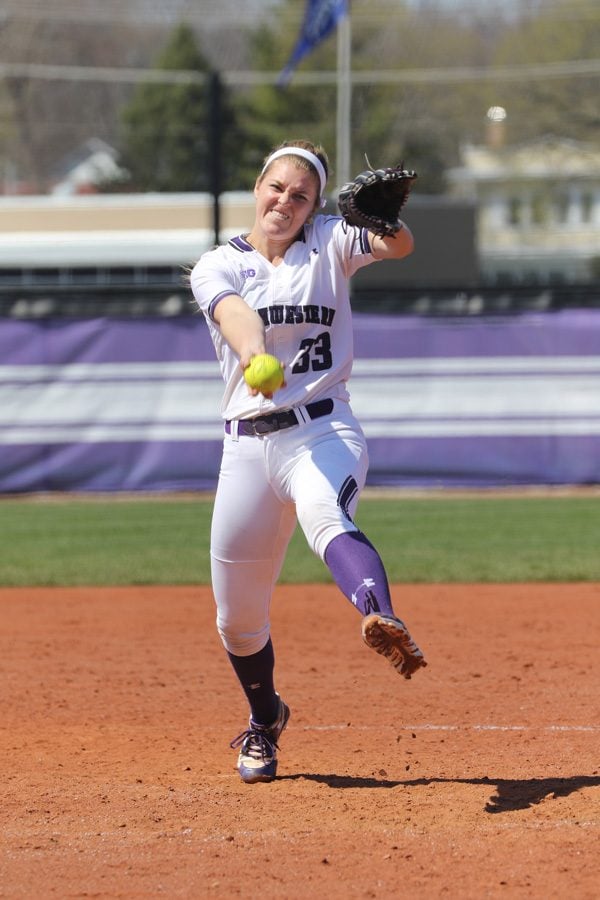 Kaley Winegarner pitches. The senior started against Minnesota in the semifinals of the Big Ten Tournament this weekend, but couldn’t power the Cats to a win.

Though the Wildcats steamed past Indiana in Bloomington in the quarterfinals, they fell to Minnesota in the semifinals, marking the fourth straight year the Golden Gophers have knocked NU out of the tournament.

In the quarterfinal against Indiana, the contest was scoreless until the bottom of the third, when Rudd singled to center to score freshman shortstop Maeve Nelson.

“I was seeing the ball really well, and it’s hard to get people in without someone else being on base, so a lot of our girls were doing really good at the same time,” Rudd said. “It was a lot of fun.”

In the fifth inning, Cuchran bumped the score to 2-0 with an RBI single that knocked in senior left fielder Morgan Nelson, who originally reached base on a walk.

In the circle, Williams threw her 13th shutout of the season, pitching a complete game, striking out nine and allowing only one walk.

“We always have another pitcher ready, but I thought she had excellent command of the game,” coach Kate Drohan said.

Though Williams performed well on Friday, Drohan decided to go with senior pitcher Kaley Winegarner for the start against Minnesota on Saturday.

She added she knew the Cats would use several pitchers on Saturday to combat a powerful Golden Gopher lineup.

“We’d just come off a three-game series with (Minnesota), so they’d seen our pitchers a lot, and we liked (Winegarner’s) matchup with them,” Drohan said.

However, in the first inning, Winegarner gave up a two-run homer to sophomore Hope Brandner, and an inning later she allowed a solo shot to junior Katelyn Kemmetmueller. In the meantime, Big Ten Pitcher of the Year Amber Fiser racked up 13 strikeouts against NU, tying her career-high.

Though the Cats saw Fiser in all three games last weekend, they still couldn’t break open the game against her.

“Nothing was too different (from last weekend),” Rudd said. “We just really needed to have a little bit more confidence in each other and knowing that if you can’t get it done, the person next in line can get it done.”

Drohan added that Fiser had a strong changeup this weekend and good late-break on her pitches.

Despite their performance in the conference tournament, the Cats will still host a Regional this weekend as the 16th overall seed in the NCAA Tournament. NU will face off against Detroit Mercy (31-26, 16-8 Horizon) on Friday, with Louisville and Southern Illinois battling in the other opening game.

Looking forward toward the weekend, Drohan said she hopes the team’s power can return, since the Cats had no extra-base hits this weekend and only one last weekend.

“We just need one person to spark us and get us going again and get us back on track,” she said. “I think it’ll happen.”