The Daily Northwestern • May 12, 2019 • https://dailynorthwestern.com/2019/05/12/sports/lacrosse-nu-advances-to-elite-eight-with-decisive-win-over-notre-dame/ 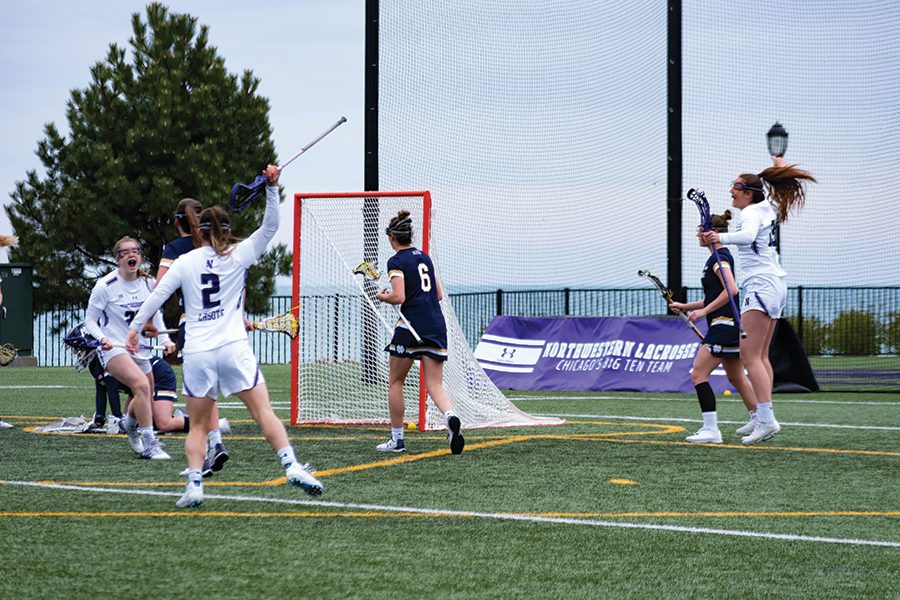 The Wildcats celebrate after a goal. NU beat Notre Dame in the second round of the NCAA Tournament at home Sunday.

Coach Kelly Amonte Hiller strolled into the postgame news conference staring at her phone as if the content on the screen was the most important thing in the world.

Minutes after beating Notre Dame on Sunday in the NCAA Tournament Sweet 16, Amonte Hiller had already turned the page to the Elite Eight. The 18th-year coach was fixated on the ongoing Syracuse-Georgetown game since the winner would play Northwestern in the next round.

Watching that game was icing on the cake for the No. 4 Wildcats’ (15-4, 5-1 Big Ten) after their 13-10 win over the Fighting Irish (14-5, 5-2 ACC), a matchup where the hosts got out to an early eight-goal lead before staving off a Notre Dame comeback in the second half.

“It wasn’t perfect,” Amonte Hiller said. “But hopefully it will be better next week.”

NU outscored the Fighting Irish 8-0 over the opening 20 minutes, led by two goals apiece from freshman attacker Izzy Scane, senior attacker Selena Lasota and junior attacker Lindsey McKone. The start was so overwhelming that with 12 minutes left in the first half, Notre Dame’s bench erupted in celebration just for getting a defensive stop against the Cats.

Following the seventh goal of the game, Notre Dame switched goalies and subbed in Bridget Deehan for starter Samantha Giacolon. The move impacted the flow and momentum for the Cats’ offense, said Lasota, who finished with five goals. Deehan was a smaller and quicker option than Giacolonand and held NU to fewer goals in 45 minutes than Giacolon allowed in the first 15 minutes of play.

A 6-1 Fighting Irish run made it a three-goal game, and Amonte Hiller said that stretch in the second half showed the Cats that they need to improve offensively.

“We could have really put our stamp on it towards the end of the first half, and we let a lot of opportunities go,” Amonte Hiller said. “We got a little bit stale on offense, and we’ve got to really work on that.”

After NU scored three consecutive goals in 10 minutes during the middle of the second half, Notre Dame made another run of its own to bring the deficit back to three goals, capped off by a goal from Notre Dame attacker Samantha Lynch with two minutes to go. But goalkeeper Mallory Weisse had five second-half saves and stopped three free-position shots to keep the Cats advantage.

NU’s defense had one of its best outings of the season, forcing 16 turnovers. But despite keeping the Fighting Irish to a limited amount of opportunities at the net, Weisse said the Cats need to improve their overall consistency on that end.

“Overall in the first half, we really dominated on defense,” Weisse said. “That’s something we need to work on, having a full 60 minutes.”

With the win, NU advances to the Elite Eight for the second consecutive season. The Cats will face Syracuse on Saturday in Evanston — Amonte Hiller watched the Orange pull away in between answering questions — and will vie for their first Final Four appearance since 2014.

“I’ve never even had the opportunity to host (a tournament game),” Lasota said. “Every year is a different group, and this group is just so special to play for.”