The Daily Northwestern • May 12, 2019 • https://dailynorthwestern.com/2019/05/12/sports/baseball-northwestern-picks-up-crucial-series-win-at-rutgers/ 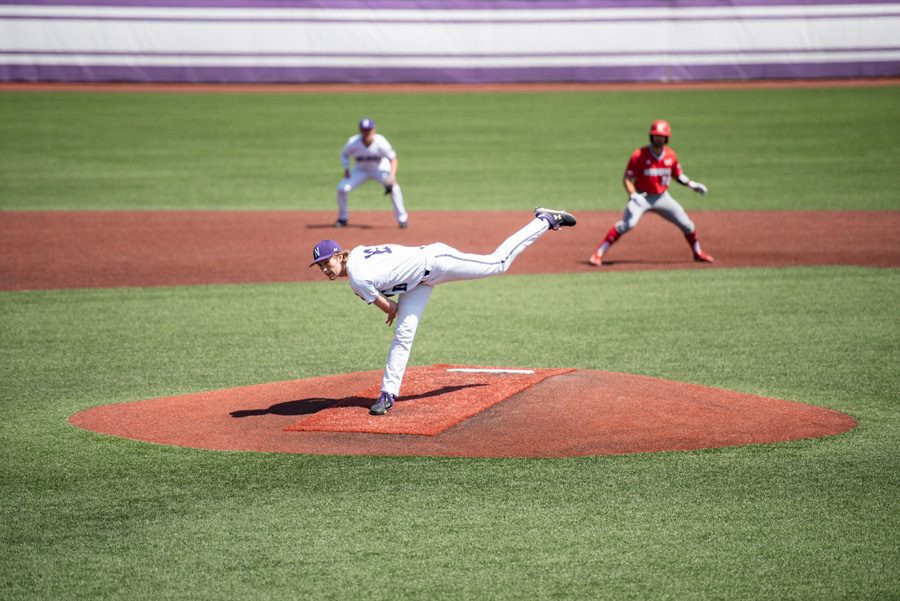 Ryan Bader throws from the mound. The sophomore threw six innings in NU’s series-clinching win against Rutgers on Saturday.

Since the beginning of last season, the top two pitchers in the Northwestern rotation have been junior Hank Christie and sophomore Quinn Lavelle. But with both players battling injuries, coach Spencer Allen has called upon sophomore left-hander Ryan Bader and freshman right-hander Mike Doherty to pitch the first two games of the weekend over the past two weeks.

Last weekend, Bader had his best game of the season, jump-starting an important series win over Nebraska. This weekend, it was Doherty who put in a masterpiece to lead the Wildcats to another crucial series victory, this time over Rutgers.

Doherty lasted into the ninth inning Saturday, giving up four hits and two walks while throwing only 87 pitches. The Massachusetts native saw only one baserunner reach third base before handing the ball off to junior Sam Lawrence, who closed out the 4-0 victory for NU (23-24, 10-11 Big Ten), clinching a series win for the Cats over the Scarlet Knights (20-28, 9-11).

“(Rutgers’ hitters) were aggressive but the height of his ball, they just couldn’t really elevate it to drive it and then (Doherty) just really started mixing towards the middle of the game,” Allen said. “That was a very, very impressive outing and it was fun to see.”

Doherty faced the minimum of three batters six different times. Relying mainly on his fastball, he found success by inducing fly balls — Doherty got 13 outs via the flyout, compared to eight groundouts and two strikeouts.

Senior right fielder Ben Dickey got the scoring started in the fourth inning when he roped a double into left field that scored junior third baseman Alex Erro. Freshman center fielder David Dunn knocked in another run in the frame with a sacrifice fly. In the ninth, Dickey added some insurance runs, mashing his second double of the game to score senior first baseman Willie Bourbon and then touching home on a groundout from freshman catcher Michael Trautwein to make the score 4-0.

In Friday’s lidlifter, Bader was a little shaky to start and Rutgers got out to an early 3-0 lead. But he settled down and finished the day with a solid 6.1-inning performance. Offensively, it took time for the NU bats to get going. But when the Cats’ best chance to swing momentum presented itself, they seized the chance.

With the bases loaded and two out in the seventh, sophomore designated hitter Jack Kelly walked up to the plate. Allen called the sophomore’s emergence over the last few weeks “huge” and Kelly exemplified that with a two-run single through the right side to extend the inning.

“It was kind of fortunate that second baseman was playing a little bit out of position holding that runner on,” Kelly said. “When some teammates in front of you get on base, it puts pressure on the defense and then it opens up some holes.”

Kelly said the stroke sparked the team for the rest of the inning. Senior shortstop Jack Dunn singled to again load the bases before Erro tied the game with a single of his own. Then freshman second baseman Shawn Goosenberg doubled home Kelly and Dunn to give NU the 5-3 lead.

In the final game of the series — which was moved from Sunday to Saturday due to impending weather — the Scarlet Knights got the initial lead and never relinquished it. The Cats managed to bring the deficit to within one run, but did not take advantage of their opportunities enough and lost 5-4. NU had four innings where it had at least one runner in scoring and did not score.

The two wins moved the Cats into sole possession of seventh place in the Big Ten standings, putting them in good possession to earn a berth in the eight-team Big Ten Tournament.

With the status of Christie and Lavelle unknown going forward, NU will again have to rely on the duo of Bader and Doherty to solidify that postseason berth. Doherty said he has been ready for this opportunity.

“Both of us know that we have the talent to be weekend guys and be effective and be good — maybe really good,” Doherty said. “I’m happy for Ryan and glad I’m in this position right now.”