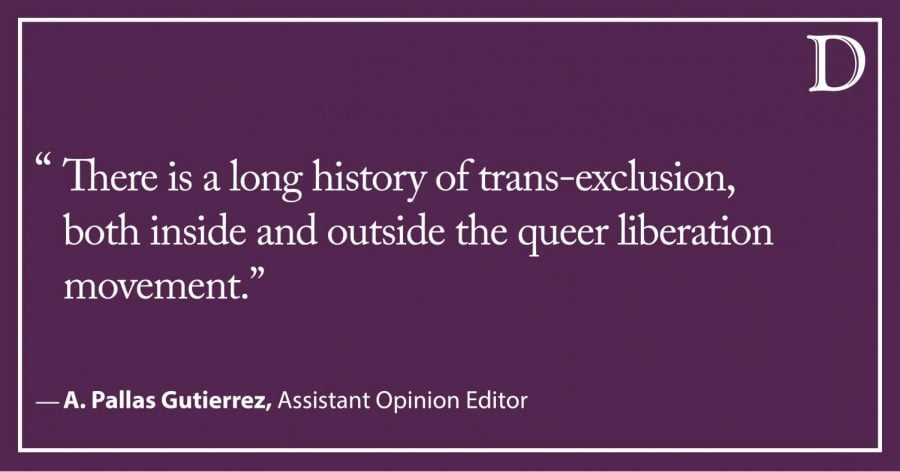 This is the thirteenth column in “50 Years of Queer Anger,” a series examining LGBTQ+ issues in the United States since 1969.

The abortion ban bills introduced in Georgia and Alabama have added further fuel to the national debate around reproductive health. News outlets have pointed out misunderstandings and misinformation being spread across social media, and celebrities have weighed in with Tweets, both serious and satirical, expressing their beliefs and proposing responses. However, all the mainstream coverage of this debate I have seen has had the same flaw: referring to reproductive health as a women’s issue or as something concerning women’s health.

We live in a binarily gendered society. In particular, we live in a society where gender and sex are assumed to be linked unless someone openly declares otherwise and comes out as transgender. According to a Williams Institute study from 2016, around 1.4 million adults in the United States identify as transgender, which amounts to about 0.6 percent of the adult population. This group is definitively too large to ignore, both in rhetoric and in practice.

Referring to reproductive health as women’s health or as a women’s issue is trans erasure. Not all women have uteruses, and not all people with uteruses are women. To claim otherwise is an act of violence against the trans community, either purposefully or ignorantly.

This rhetoric around reproductive health is obviously not new, just as the equation of gender and sex is not new. There has been a large, ongoing debate about biology-based signs at protests like the Women’s March. Slogans like “pussy grabs back” and “pussy power,” can be empowering to cis women, but feel reductive to trans people. While reproductive health laws obviously impact anyone with a uterus, and such laws are often the main focus of the Women’s March, equating gender and sex actively erases trans people. This biology-based rhetoric tells trans women that they don’t belong in the women’s movement, and tells all trans people that they are not valid.

While people making signs are often well-meaning and simply not thinking of — or aware of — trans experiences, there is a more malicious brand of trans erasure. Trans-exclusionary radical feminists do not believe that gender identity and sex are different; if an individual is assigned male at birth, that individual is a man in the eyes of TERFs. This rhetoric is extremely dangerous.

TERF rhetoric goes beyond the dismissal of trans identities, which is already heinously disrespectful and harmful to trans individuals. TERFs also believe that laws protecting trans rights are infringing on the rights of or otherwise endangering cis women. Worse, they claim trans rights endanger children. Although there is no evidence to back up either of these claims, TERFs are stubborn in their beliefs and actively fight any legislation that protects trans people.

There is a long history of trans-exclusion, both inside and outside the queer liberation movement. The role of trans women of color in starting and advancing the queer liberation movement has long been ignored. It can be extremely hard to identify trans people in history because of a lack of terminology and self-identification before the 20th century. This makes trans erasure even easier because historians can claim that there simply isn’t evidence of trans people, even in the face of people assigned female “living as” male.

Even today, trans people are misgendered after death. Trans roles are given to cisgender actors. Trans people are interrogated about their bodies. This harassment only continues erasure and ridicule of trans lives, which allows for a pattern of violence against trans people.

Gender neutral rhetoric may feel unnatural at first, because American society commonly uses terms like “women’s health,” but non-gendered alternatives are available. For women’s health, there’s reproductive rights. For brother or sister, there’s sibling. Using gender-neutral language in policy discussions makes them inclusive of everybody, and puts society on the right track to trans-inclusion.