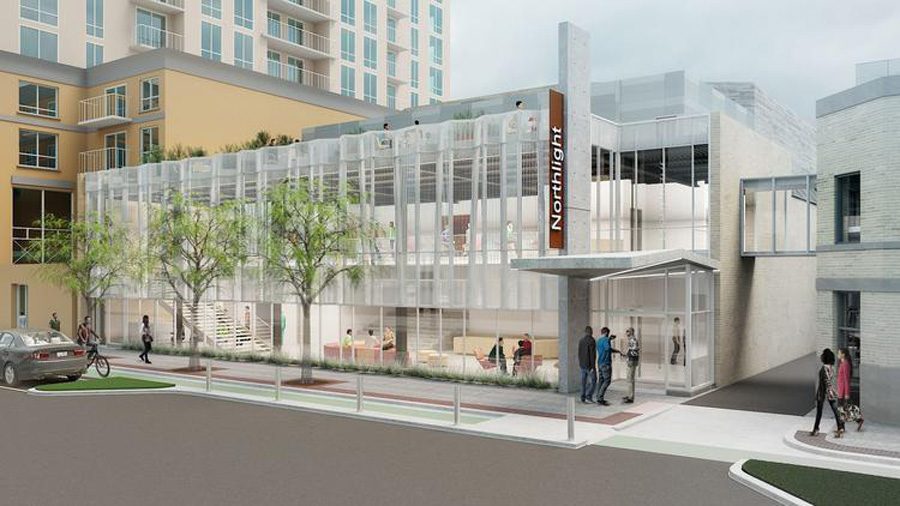 A rendering of a the proposed theatre at 1012-1016 Church St. Northlight Theatre has announced plans to build a theater in Evanston.

Northlight Theatre has signed an option agreement to purchase and demolish an existing Evanston building and build a new theater in its place, according to the Chicago Tribune.

The organization presents five mainstage productions a year, according to its website, which also says it has over 6,000 subscribers and audiences totalling over 50,000 each season.

Northlight plans to demolish an existing building located at 1012-1016 Church St. and is embarking on a $20 million campaign to fund a new 300-seat low-rise theater, according to the Tribune. The Tribune also reported that future plans include a new black-box theater and additional office space.

While Gregory Kandel, Mike Nussbaum and Frank Galati founded the theater in Evanston in 1974 under the name Evanston Theatre Company, it relocated to the North Shore Center for the Performing Arts in Skokie in 1997.

The plans to build a new theater were suggested by Amy Morton, who runs The Barn Steakhouse in Evanston, according to Northlight’s executive director Tim Evans. Morton’s restaurant would be located adjacent to the new building.

“There has been a drumbeat for Northlight to come home,” Tim Evans, Northlight’s executive director, told the Tribune.

This isn’t Northlight’s first attempt to relocate to Evanston. In 2017, Farpoint Development worked with Northlight to propose a 37-story building on Sherman Avenue, which would include the new theater as well as a boutique hotel, a restaurant, residential units and a parking facility. Developers eventually backed off of the development in 2018 due to local backlash, including concerns the high-rise would displace local businesses.

Northlight hopes to open a new theater in the fall of 2021 around the end of the current lease with the North Shore Center.