The Daily Northwestern • May 10, 2019 • https://dailynorthwestern.com/2019/05/10/campus/israel-story-presents-live-podcast-as-part-of-hillels-nu-israel-week/ 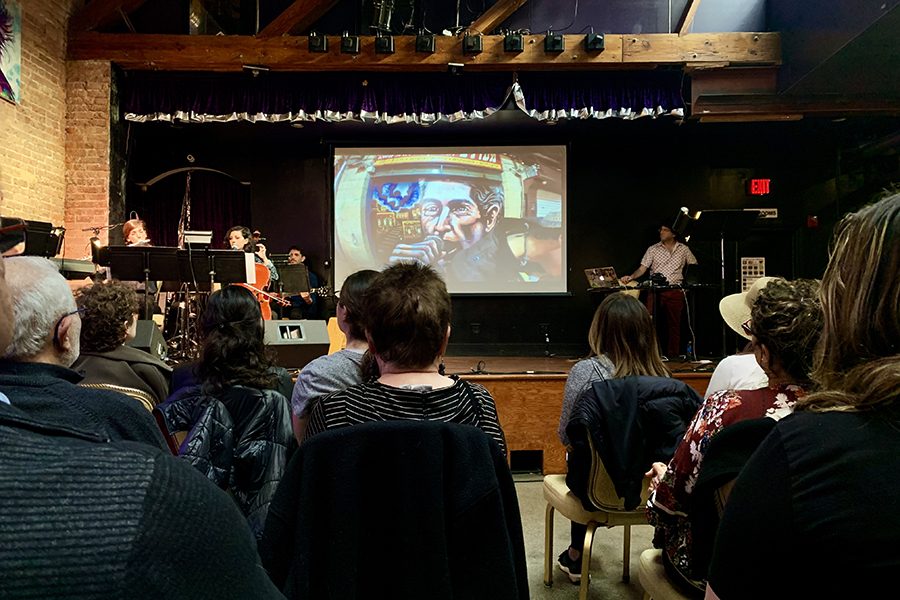 Israel Story’s performance at Evanston Rocks. Audience members watch a video of graffiti artists painting on walls and buildings while listening to music played by the live band.

Israel Story gave a live performance Thursday of the podcast “The Wall – A Look At The Barriers That Separate Us, And Those That Bring Us Closer Together” at Evanston Rocks. The performance is a part of a week-long series of events for Northwestern Israel Week, organized by Northwestern Hillel.

The team from Israel Story utilized a range of different multimedia elements in their performance, including a live band, a DJ set and a series of photographs and videos to tell stories, all the while weaving through an underlying theme of walls: human walls, obstacle walls, religious walls and separation walls, each connected to Israel in some way.

Performer and tour manager Hannah Barg explained that Israel Story is a radio initiative and podcast aimed at narrating the stories of members of Israeli communities through podcasts and tours of live performances.

“Every story that we tell is somewhat connected to Israel,” Barg said. “It has to have a link.”

The podcast works to connect a series of stories to one underlying theme — in this case walls — all the while explaining the process of finding each unique narrative. The stories of how the team comes across, looks for and sometimes even stumbles upon their narratives are unique stories within themselves.

Co-founder and host of the show Mishy Harman said the team has “sort of developed these story antennae of searching for stories everywhere.”

Harman said his favorite story from this show was “the story about the Arab woman who turned out to be a Holocaust survivor.” Between tracking down all the characters and following them around, “that story took over a year,” he said.

During the event, the team showed a video of a historical football game between Australia and Israel — where Israeli players stood shoulder-to-shoulder in an effort to prevent the opposing team from scoring a penalty — to highlight the theme of “human walls.” They also discussed obstacle walls, showing footage of the performers trying to climb a wall in a training center for the Israel Defense Force.

They spoke about the historical and religious connections of the Western Wall in Jerusalem, which is the most religious site in the world for Jewish people. The team ended the performance by mentioning separation walls, as they touched on the historical and political complexities of Israel’s West Bank Barrier wall, dubbed “apartheid road.”

Weinberg sophomore Galit Rosenblatt, who helped organize the program for Israel Week, said she thought the event was a dynamic way of telling a story.

“It’s not just storytelling,” she said. “There’s the visuals, the video, the music and really really talented performers. People are laughing and gasping at time… They get chills.”