The Daily Northwestern • May 9, 2019 • https://dailynorthwestern.com/2019/05/09/sports/womens-golf-brooke-riley-powers-wildcats-to-another-ncaa-championship-appearance/ 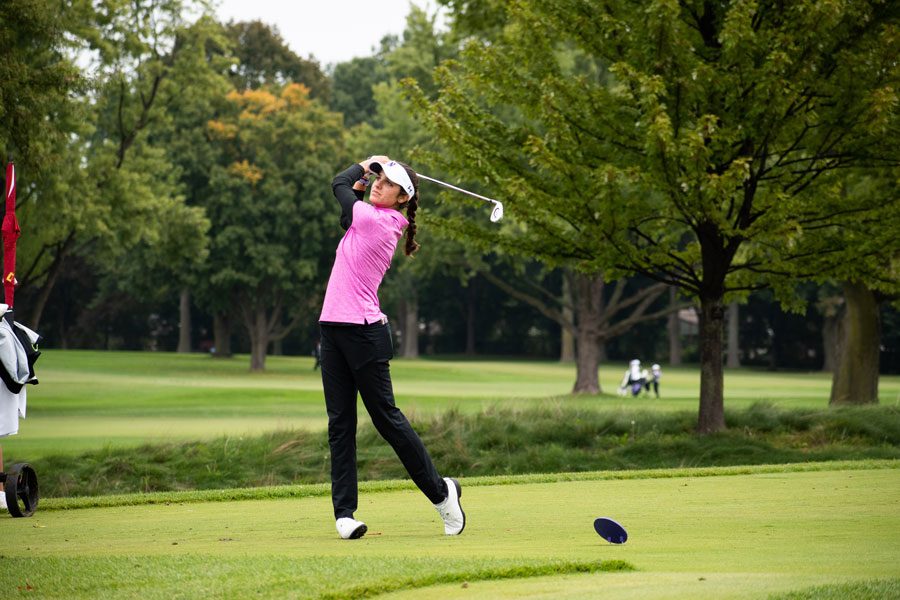 Brooke Riley follows through. The junior broke the women’s course record on the first day of NCAA Regionals to help the Wildcats advance to the NCAA Championship.

Course records are made to be broken, and redemption is the best motivator.

In the first tournament after Northwestern’s disappointing sixth-place finish in the Big Ten Championship in April, junior Brooke Riley broke the women’s course record at the Tumble Creek Club by shooting a 65 in the first round of the NCAA Tournament.

That led the Wildcats to finish with an even-par team score in the Cle Elum NCAA Regional in Washington and advance to the NCAA Championship.

On the first day of the three-day event, NU had the second-best score in the 18-team field, but after shooting 14-over-par on the second day of the tournament, the Cats entered the final day in fifth place. This put them in a precarious position, as only the top six scoring teams advance past the Regional.

On the morning of the tournament’s final day, Riley said she and her teammates had one of the best and most relaxed warm-ups they have had all season.

“It was just a really good vibe among the five of us,” she said. “My warm-up (Wednesday) was just really good, so I went out with a lot of confidence. We just were keeping everything light and having a lot of fun.”

Dealing with the pressure of the NCAA Tournament better than they did in the Big Ten Tournament, the Cats shot 10-under Wednesday. NU finished 11 shots better than seventh-place Ohio State, which was the best-scoring team to not make the cut.

Riley said there was some déjà vu for the team since Ohio State was the team that upset NU and won the Big Ten Tournament on April 21.

“Since the team chasing us was Ohio State fresh off Big Tens,” Riley said. “We had a competitive feel there.”

By moving on to the next round, NU is one of 24 teams advancing to the NCAA Championships. Last year, the Cats advanced to the national quarterfinals before losing a close matchup against Stanford that ended their season.

Riley said the team showed the ability to compete at a high level under pressure this weekend, and she said by advancing to the NCAA Championships, the team accomplished one of its major preseason goals.

“The first thing I think of is our seniors,” Riley said. “We just wanted to do everything we could today to keep the season going and give ourselves another shot at nationals.”