The Daily Northwestern • May 9, 2019 • https://dailynorthwestern.com/2019/05/09/sports/womens-basketball-the-8-steps-nu-takes-to-recruit-the-best-talent-and-how-its-different-from-everyone-else/

Women’s Basketball: The 8 steps NU takes to recruit the best talent — and how it’s different from everyone else 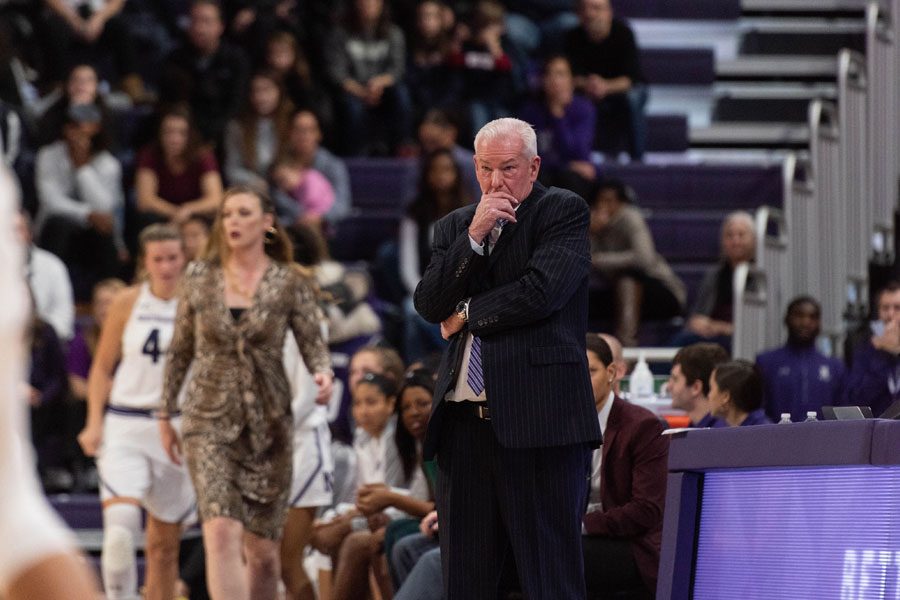 Joe McKeown calls out a play. The coach talked to The Daily about how he and his staff go about recruiting players to join his program.

After securing three consecutive highly-rated recruiting classes, The Daily Northwestern spoke with coach Joe McKeown and assistant coach Kate Popovec, who oversees recruiting, about the process of getting the right players to come to Northwestern. They laid out in detail the eight steps the coaches take to fill the roster with high-level talent.

They’re scouting eighth graders now, which is one of the biggest recent changes for NU’s coaches. It’s easier to learn about them now because of databases the team subscribes to that provide breakdowns of all the top players, including GPA and measurements. That raw material becomes the basis for national rankings, meaning the Cats and other programs that subscribe know a significant amount about players before those rankings are even released. Currently, NU tracks about 25 players in every high school class.

“That gives us a group to follow from when they’re young,” McKeown said. “Still, we don’t really look at scouting services and say, ‘Hey, we have to get the number one player in the country.’ We have to do a little more homework than most schools because of our academic piece.”

2. Check Twitter and call as many people as possible

Once the coaches identify a potential fit, they try to learn everything they can about a player — from their family background to whether they use GIFs. They cross-reference what they learn in the databases with coaches they know on the grassroots levels, but recently they’ve been able to get much of this information via social media, where the Cats can learn details as revealing as which schools have reached out to which prospects.

“Social media has completely changed the scope of recruiting in a lot of good ways and a lot of hard ways,” Popovec said. “I think it’s great because we can find out a lot of information on social media. I can dig and see who’s offered a kid. But it’s also hard for the kid because they’re constantly being bombarded through that network.”

3. See them for yourself

NU sends coaches to many NCAA-approved AAU tournaments because access to players is limited to short windows of time scattered throughout the year. One of McKeown’s favorites is the annual “Boo Williams” tournament, where he has seen several future Cats play. He attended a recent year’s tournament already familiar with current freshman guard Veronica Burton. After Burton thrived in front of other college coaches, McKeown said he had to step up his recruiting game to secure her commitment.

“Once she showed out at (Boo Williams), man, it was like the floodgates opened,” McKeown said. “So I had to jump hard. We had to get on our game quick, say that, ‘Yeah, we really want you here.’”

After that, McKeown said NU had coaches at every game sitting in the front row to ensure the Cats kept their recruiting edge. It worked. Burton committed to the program and then started every game she played in during her first year.

4. Project how they might fit five years into the future

No matter how young a prospect NU is recruiting, the team always analyzes how they project the team will look during that player’s tenure in Evanston. Popovec evaluates how many open scholarships the team will have every year and where holes in the roster might emerge. Then, she communicates with the other coaches about pinpointing specific areas of need.

The recruiting calendar is a very contentious topic among coaches, since everyone has changes they want to see that would allow them to watch prospects in person more regularly. There are certain “dead periods” when coaches aren’t allowed to contact a player, and coaches have a predetermined collection of 100 days when they are allowed to speak with players. If McKeown got his way, he would have dead periods eradicated and be able to allocate those 100 days in any way he wanted.

Currently, there are strict limitations that prevent the coaches from attending high school and AAU practices, certain AAU events and connecting in person at specific locations. McKeown is advocating for less governance by the NCAA about this process in what he calls his campaign for a “free 100 days.”

“If you read about that (being considered by the NCAA in the future),” he said, “you’ll know that idea came from me.”

6. Always track the transfer market, even if they might not add one

The Cats have one open scholarship for the 2019-20 season and only one returning post player in junior center Abbie Wolf, and McKeown said the team is always looking at the transfer market for an addition to complement the team. But he said he doesn’t want his team to become reliant on bringing in transfers, despite playing in an era where several programs are bringing in multiple transfers every year.

“Obviously we follow it, and it’s changing our game and having a huge impact,” McKeown said. “But we’d probably want to know why they’re leaving. Can they academically fit Northwestern? And obviously, can they play in the league? It’s a big trend. If we can get one or two every couple years, I think that’s been our policy.”

The Cats haven’t added a transfer since center Oceana Hamilton, who joined the program in 2015 after spending two seasons at Alabama.

7. Receive a commitment, celebrate and move to the next one

Despite recruiting being such a pivotal part of college basketball, Popovec said sometimes a team secures a player because it just “gets lucky.” Other times, the coaches can do everything right and still lose the recruiting battle. Since it’s such a tenuous process, the coaches are excited when they receive a commitment, high-fiving each other in the moment and frequently going out to dinner that night to celebrate.

“It’s just such a relief,” Popovec said. “Especially when kids commit early, during (their) junior season, I think it’s such a weight lifted off your shoulders because you can start to have pieces of the puzzle matched up. So you’re able to formulate a better plan and also invest a lot of energy into other kids.”

8. Anticipate the incoming players, which for 2019-20 will be Kaylah Rainey and Laya Hartman

Coming off a run to the WNIT Championship, NU will be adding two highly-recruited guards in Rainey and Hartman. Rainey played on a Chicago-based AAU team, which allowed the staff to see her often, and she picked the Cats over Iowa, Illinois and Kansas, among others.

“She’s also a kid that really fit what we felt we needed,” McKeown said. “She’s really athletic, got great size, she plays on both ends of the court.”

Hartman, who the staff identified as a target after playing tenacious defense at an AAU tournament, is a strong 5-foot-11 scorer and perimeter defender who picked NU over offers from five Big Ten teams, among others.

“When I saw her play, what impressed me the most was that she wasn’t having her best scoring game,” Popovec said. “I knew she could score, but she generated her offense from her defense, which is something that I don’t think you could coach.”