The Daily Northwestern • May 9, 2019 • https://dailynorthwestern.com/2019/05/09/sports/softball-northwestern-turns-page-after-minnesota-series-readies-for-big-ten-tournament/ 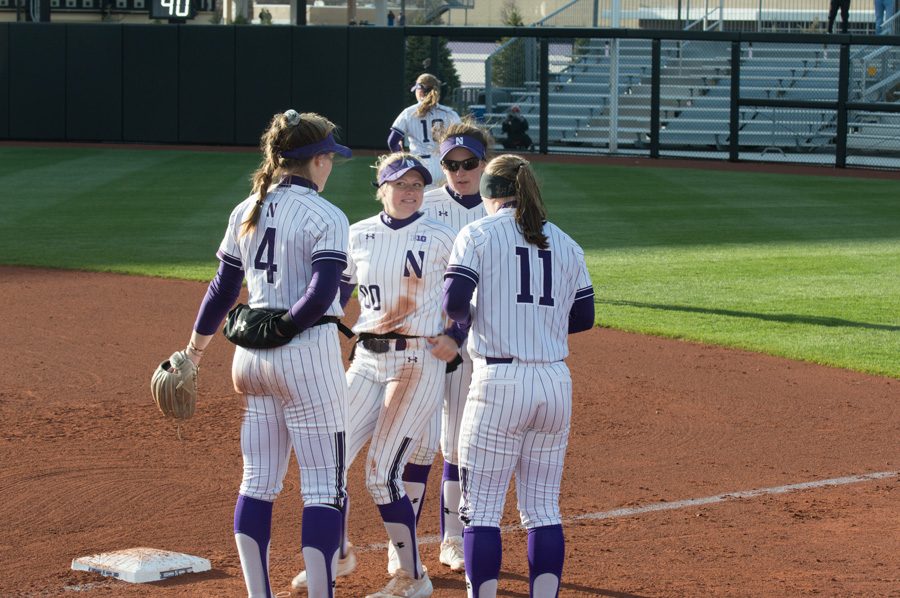 The Wildcats gather in a huddle. NU will face Indiana in the quarterfinals of the Big Ten Tournament on Friday.

As the No. 2 seed in the Big Ten Tournament, Northwestern has the chance to make some serious noise. But the Wildcats are competing for much more than a trophy this weekend.

No. 18 NU (42-9, 21-2 Big Ten) has an RPI of 11, which puts the Cats right on the bubble for being a top-16 national seed and hosting an NCAA regional. In the end, their fate will be in the hands of the selection committee, but a deep run in Bloomington, Indiana, will help solidify their chances of being seeded.

It will not be easy. NU will play the tournament hosts, seventh-seed Indiana, in the quarterfinals Friday. The Hoosiers (36-20, 10-13) defeated Penn State 4-2 on Thursday to advance, and split the game between their two top pitchers, Tara Trainer and Emily Goodin, so both should be ready to go again against the Cats.

“We’re definitely not overlooking our first matchup,” senior left fielder Morgan Nelson said. “That happens every year in the Big Ten Tournament, someone gets upset. You don’t want to be that team, you want to be the team that takes care of the teams you need to take care of.”

NU beat Indiana 5-0 on March 16 in a game that did not count toward the Big Ten standings. Freshman pitcher Danielle Williams threw a two-hit shutout in that game, and the Cats’ four hits were all home runs. But the Hoosiers love to put pressure on defenses, as their 141 stolen bases lead the Big Ten by far.

Should NU advance to the semifinals, it would likely mean a rematch with No. 3 seed Minnesota, who won two of three against the Cats last weekend in Minneapolis. Coach Kate Drohan said her team, which starts five freshmen on a regular basis, learned a lot from that series.

“What a great experience it was for us,” Drohan said. “Yes, our team was very disappointed on that bus coming home, but I’m excited about their maturity and their hunger to get a little better.”

Drohan was named Big Ten Coach of the Year on Wednesday for the third time in her 18 seasons at NU and the first time since 2006. Several players earned accolades from the conference as well, with Williams winning Big Ten Freshman of the Year honors.

Maeve Nelson said the team’s upperclassmen have been helping her and the other freshmen prepare for postseason play.

“It’s been unspoken guidance,” Nelson said. “They know how everything goes, and their calmness and their preparedness has been flowing through the team.”

The Cats’ pitching staff, led by Williams, has been strong all season, with NU’s 1.92 team ERA ranking second in the Big Ten. The offense, however, has been up and down, and the Cats are coming off a weekend in which they managed just one run on four hits in three games against ace Amber Fiser and company.

NU is viewing the Minnesota series as the start of its postseason, and although the Cats fell short of the regular-season championship, Drohan said NU is built for this tournament.

“What we experienced last weekend was the most valuable lesson,” Drohan said. “With the atmosphere, the great pitching we faced, that was a true gift.”