The Daily Northwestern • May 9, 2019 • https://dailynorthwestern.com/2019/05/09/opinion/thuillier-speaking-another-language-should-never-be-an-indictment-of-your-ability-to-function-in-american-society/

Thuillier: Speaking another language should never be an indictment of your ability to function in American society 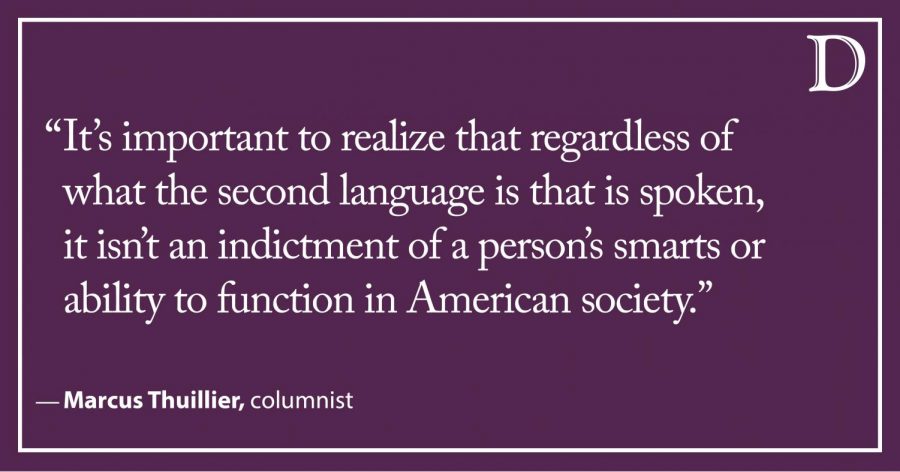 “Say something in French,” was a sentence I heard constantly when I first moved to the United States. Within the first five minutes of meeting new people, I would be known as “that guy who speaks another language.” I have struggled to really understand what that means for me throughout the years as I transitioned from high school to college. More often than not, it doesn’t mean much, since speaking French in and of itself isn’t a big deal. However, there have been instances in the past where not being a native English speaker signaled another way my experience in this country was diminished.

Despite not having an official language as defined by the Constitution, many people and organizations within the United States prefer that other people living in this country speak English. If you don’t speak English, they like it when you speak a traditionally “white” language. When people learned that I spoke French, it would never cause much prejudice. People would be curious, enthusiastic and ask me questions about it — questions that, although annoying, were never meant to be harmful. Meanwhile, people can get detained by Border Patrol solely because they are seen speaking Spanish in public, as happened in Montana about a year ago.

Speaking another language can make you feel marginalized. There are obviously different levels to this, as my feelings of uneasiness cannot compare to what people speaking Spanish or Arabic — or languages viewed with similar prejudice — face on a daily basis. There are countless examples of people being heckled or targeted for speaking their native language in public settings in America. The “This is America; speak English” phenomenon has gotten more attention with the rise of social media platforms like Twitter, and has helped to show how the marginalization of those communities remains a true problem.

The bulk of my issue with how people view bilingualism if your first language is not English is the assumption that people speaking other languages in public cannot speak English well. Most of us choose not to speak English in public for convenience. I don’t speak English to my parents, because it would be weird. Yet that somehow is a problem to people we are not even interacting with. In this country that is constantly held up as a paragon of freedom, I sometimes feel not free to speak my language without judgement.

Much has been written about the advantages of bilingualism, both as a competitive advantage and leading to improved brain improvements, but there is at least one major drawback. Bilinguals are bound to feel stupid at some point when trying to navigate the language they are less comfortable with. Even after living here for almost eight years, I still think faster and perform better in French. My first year of college, despite being fully fluent in English, I struggled to grasp key concepts of my physics lectures because I had been in the French school system for so long. I even got wrong answers on one test, where I blanked on what the word “wavelength” translated to in French. As I said, it is in no way comparable to being detained for speaking my language. It is, however, one more struggle to face in a world full of them.

Author Dragan Todorovic had a simple take on it: “It was painful to realize that in my language I was smart, but I sounded stupid in English.” This is all good and fun when it is a white person speaking French, but because of entrenched racism, it quickly devolves into a problem otherwise.

It’s important to realize that someone’s first language isn’t an indication of a person’s smarts or ability to function in American society. It is an added layer of complexity that the speaker has to navigate, but that ultimately should not lead people to differentiate you from native English speakers. It especially can’t be evaluated on a case by case basis, dragging traditionally suppressed languages down and glorifying the use of Western European tongues.

In most cases, knowing more than one language is an advantage, and this recognition needs to be extended to the public sphere for all languages.