The Daily Northwestern • May 9, 2019 • https://dailynorthwestern.com/2019/05/09/campus/illinois-house-bill-would-classify-graduate-and-research-assistants-as-employees/ 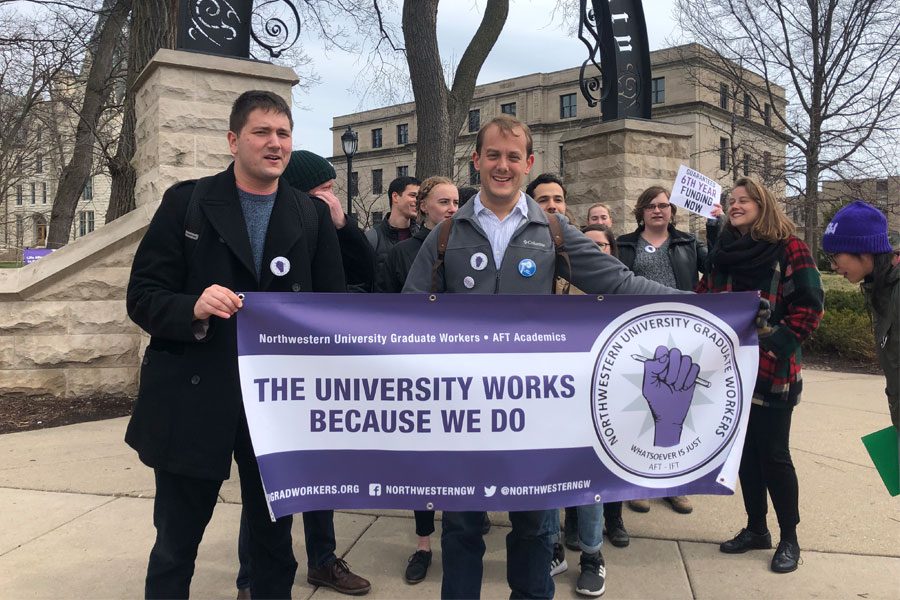 Graduate students march to the Rebecca Crown Center to secure sixth-year funding from The Graduate School. The passage of Illinois House Bill 253 would be a significant win for graduate students, who have been pushing for rights as employees instead of students.

A House bill making its way through the state Senate would give graduate and research assistants the same labor rights as other educational employees.

The bill, sponsored by state Sen. Laura Fine (D-Glenview), would give graduate and research assistants the rights to bargain collectively for “better working conditions and fairer pay,” as well as guaranteeing the same rights to assistants as other educational employee in the state, according to a Wednesday news release.

“Having a say over one’s own labor is a right that should be guaranteed to everyone,” Fine said in the release. “I’m proud to be fighting to ensure graduate and research assistants can continue to do their important work with dignity.”

Currently, graduate and research assistants are classified as “students” under state law. Under House Bill 253, these assistants would be removed from this category, reclassifying them as employees.

In August 2016, the National Labor Relations Board ruled that student assistants at universities should be considered as employees. This spurred a push toward unionization from the Northwestern University Graduate Workers, to gain that recognition.

The University disagreed with the NLRB’s rulings, saying that recategorizing students as employees would “significantly change” their relationship between the students and their faculty mentors.

The House bill passed through the Senate’s Labor Committee and awaits consideration from the full state Senate. A similar bill was vetoed last year by former Gov. Bruce Rauner, a Republican.