The Daily Northwestern • May 9, 2019 • https://dailynorthwestern.com/2019/05/09/campus/crushes-and-confessions-nucrush-allows-shy-students-to-shoot-their-shot/ 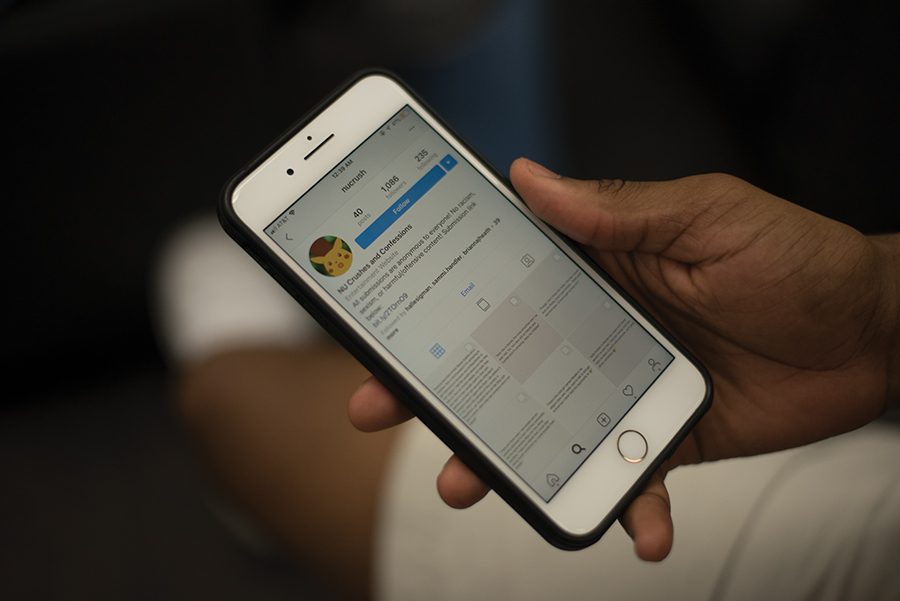 The NU Crushes and Confessions account. A student scrolls through the page

For many Northwestern students, the thought of admitting feelings to a crush is paralyzing. Even worse is the possibility of those feelings going unrequited. A Northwestern student, who has asked to remain anonymous, saw this struggle for college students to confess their feelings of love as an opportunity, and created the Instagram account @nucrush.

Titled “NU Crushes and Confessions,” @nucrush debuted Feb. 14. It has since posted 40 times, each time with a carousel of multiple confessions anonymously submitted by Northwestern students. The account has quickly grown since its creation, and has now received over 400 submissions since February and 1081 followers, as of Wednesday evening, according to the account owner.

Anonymity and safety are at the forefront of the account owner’s mind, with guidelines for submissions included in the account’s bio: “All submissions are anonymous to everyone!” the bio reads. “No racism, sexism, or harmful/offensive content!”

The founder of the account said they stick to these guidelines so the account stays true to its original purpose.

“It’s purely entertainment and I really don’t want this account to get away from that,” they said. “It’s a good place for people to rant or confess things they wouldn’t normally say without the veil of anonymity.”

Romance is at the forefront of each post — each one usually includes compliments to a specific individual. Communication freshman Michael Senko was the focus of a post from March 26, calling him cute and sweet while also asking if he was single.

Not all submissions are strictly about romantic crushes, though. A post about Communication freshman Alana Friedman professed a friend crush for her instead of something romantic.

Friedman still is not sure who sent it, but enjoyed the submission.

“It’s honestly kind of flattering to be mentioned,” Friedman said. “I wondered who submitted it after my friends starting tagging me in the post.”

The account owner said they aren’t aware of any students that have met each other because of the account’s posts.

Although the account provides an opportunity for students to anonymously admit their feelings for others, some students mentioned in the submissions feel the posts create a “dead end” for possible future interactions.

“I didn’t understand why someone would submit a crush to the account but then not do anything about it,” Friedman said. “I get that people want to get their feelings out there but if you don’t shoot your shot, what’s the point?”

When sorting through submissions to post, the account owner sets a few rules to follow to ensure that each post is of the highest quality. These include prioritizing submissions that are more than 10 words, relevant, original and don’t name someone that has already been posted about.

The current account owner said they have no plans to stop posting as frequently as they do, especially considering the growing number of submissions they receive each day.