The Daily Northwestern • May 9, 2019 • https://dailynorthwestern.com/2019/05/09/ae/womens-empowerment-play-festival-to-premiere-in-evanston/ 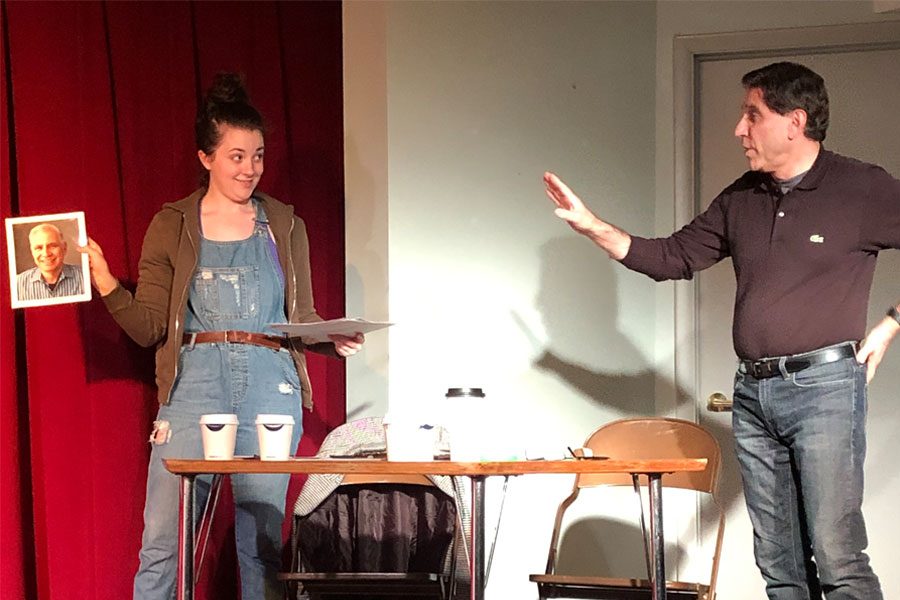 Actors rehearse for the Women’s Empowerment Play Festival. The festival will run from May 11 through May 25.

As conversations surrounding women’s rights continue to saturate the media, such as the #MeToo movement and national marches, a local theater company is hoping to contribute to the dialogue with the 2019 Women’s Empowerment Play Festival.

The festival will run from May 11 through May 25 at the Northminster Presbyterian Church of Evanston, and feature two one-act plays that highlight issues surrounding sexual assault and gender roles. The festival is produced by the 2nd Act Players, a local theater company aiming to explore themes that surface during the latter half of people’s lives such as divorce, heart disease and aging loved ones.

John Frank (Medill ’76) founded 2nd Act Players with his wife Carolyn Calzavara (Kellogg ’87) in 2013. Frank produced and directed the plays in this year’s festival, and he said he helped put on a similar festival last year that also centered the #MeToo movement.

In addition to the performances, two local ministers and two people from the Northwest Center Against Sexual Assault will lead a panel discussion after the May 19 show to talk more in depth about the themes of the plays. Frank said he hopes the show will act as a starting point for a more in-depth conversation.

“We normally do at least one talk back for each play because we feel that our plays should just be the start of the discussion on the topics,” Frank said. “We want people to talk more about them.”

To open these dialogues to a larger Midwest communities, 2nd Act Players tries to give playwrights of all levels of experience an opportunity to showcase their talents. To achieve this, they held a script writing competition to select one of the plays for the festival. Frank said Jerome Jagielski’s “Intentions” was chosen from nearly 60 submissions, as it successfully captured important themes related to women’s empowerment. While Jagielski has written over 20 different plays, he said he has never received any formal theater training.

“Intentions” tells the story of a woman named Katherine, a survivor of sexual assault hoping to find love. Jagielski said he grew fond of Katherine’s character while writing the story and hopes she is memorable for others.

“I love writing and I love developing characters, and it’s such a great thrill for me to see my characters that will come alive on stage in just a few more days,” Jagielski said. “It’s a dream come true for a writer.”

The second one-act play, “A Matter of Gender” by Sloane Drayson-Knigge, follows an actress trying to convince a director that she can play the role of God even though she is a woman. The play uses humor as the primary mechanism to unpack the oppression of gender roles and stereotypes.

“Humor always resonates with audiences,” Soden said. “It’s really cool that ‘A Matter of Gender’ is utilizing it to discuss important themes like gender stereotypes. It’s a really good way to bring issues like these to people’s attention.”

Jokes aside, Frank said he thinks this year’s show will leave audiences feeling invigorated, specifically for the women attendees to feel proud of their identity.

“What we hope is that people will come away feeling empowered,” Frank said. “Although they may have faced many problems and discrimination, they can be strong and fight and triumph.”